Grows Over 20 Feet Tall in Ferndale Front Yard
(Crystal A. Proxmire, Aug. 30, 2018)
Ferndale, MI – With a stalk that is too big for one hand, and a height estimated at over 20 feet, the mammoth sunflower in the front of Michael Purdy’s home on Academy Street in Ferndale has been attracting a lot of attention.
“People are totally freaking out, stopping to take pictures,” Purdy said.  The tallest sunflower in

the world, according to Guinness World Records, was grown in Germany in 2014, reaching just over 31 feet tall.
Though Purdy’s is not record-breaking, it is certainly an oddity.
This is especially true since he didn’t even plant it.
Purdy’s yard is a wonderland of nature’s colors and textures.  He’s lived there for 11 years, but started using his front lawn as garden space in 2015 after Ferndale passed a native vegetation ordinance allowing homeowners more freedom in their landscaping choices.
“The tomato plants took over, and they come back every

year.  I’ve got some pumpkins, and a watermelon,” Purdy said.  There are also roses and zinnias, plus a porch full of potted plants. In the area between the sidewalk and the street is a rather tall sunflower patch.
But the seed that started the giant somehow found its way to the side with the tomatoes and melons, growing perfectly in the corner of the yard.
“I don’t know how it happened, or how it got so big, but it’s made for an interesting summer,” Purdy said.
“I did use the compost from the city in my yard, and I know that is good stuff.  I had a squash last year that was this big,” he said as he held up his hands

about a foot and a half apart.
When asked if he recommended that others create garden-lawns like he did, Purdy was clear.  “Absolutely,” he said. “I don’t have to water.  I don’t have to mow. I don’t use fertilizer or any chemicals like you do with grass. I get great food. There’s so many reasons. …We waste so much water, for what?  Green grass. This is so much better for the environment.”
The bees, butterflies, and birds are also appreciative of the habitat, with many fluttering around between the flowers and the foliage.  While many sunflowers remain thin with only one, or a few buds, this one has grown not only tall, but wide.  On Thursday there were 36

blossoms. But within the next few days another 70 or more will be showing off their bright yellow petals.
The giant sunflower is located on Academy Street just West of Paxton, and Purdy is used to visitors. “It’s fun watching people slamming on their breaks and turning around to see it.”
Come fall Purdy thinks he may need a saw to cut it down. He’s already had to trim the lower limbs and leaves because they were blocking the sidewalk. The leaves alone are bigger than his head. He’s also tied the plant to a stake to prevent it from falling over in a storm.
He said it will be strange when it is gone, and hopes for a long summer.
“I’ll have a lot of sunflower seeds at least,” he said.
If you like sunflowers, check out this story about Oak Park’s sunflower program.  Also check out this story about an award-winning pumpkin grown in Holly. 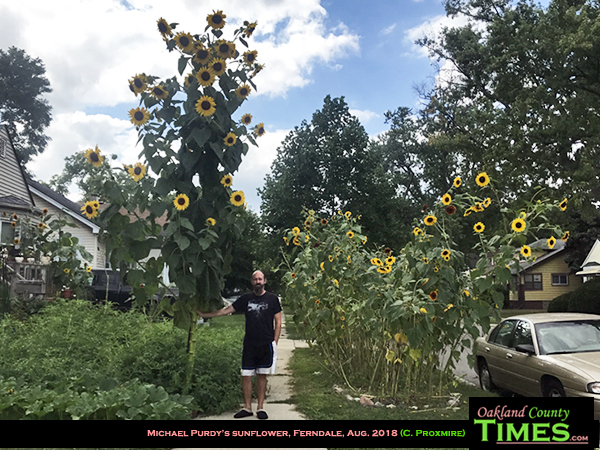 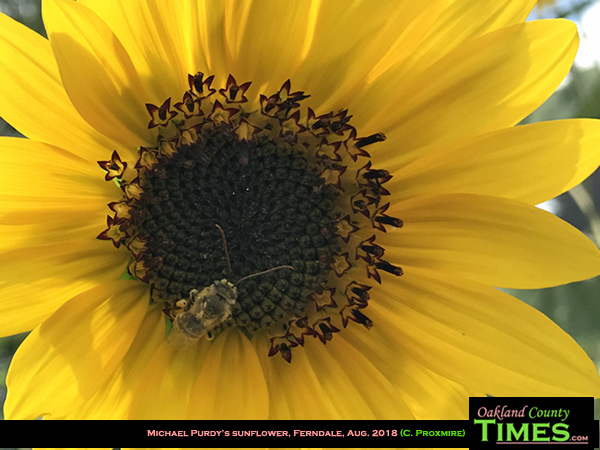 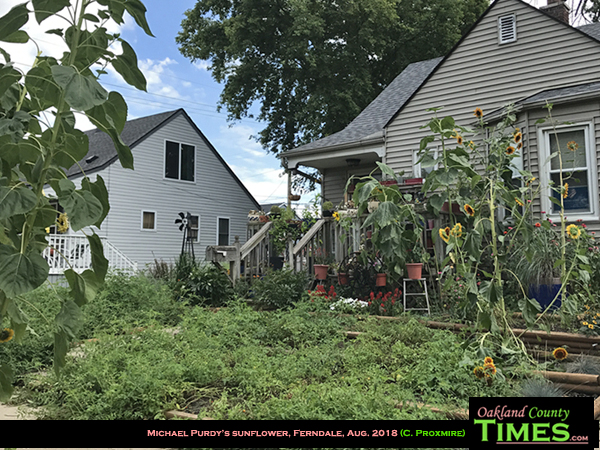 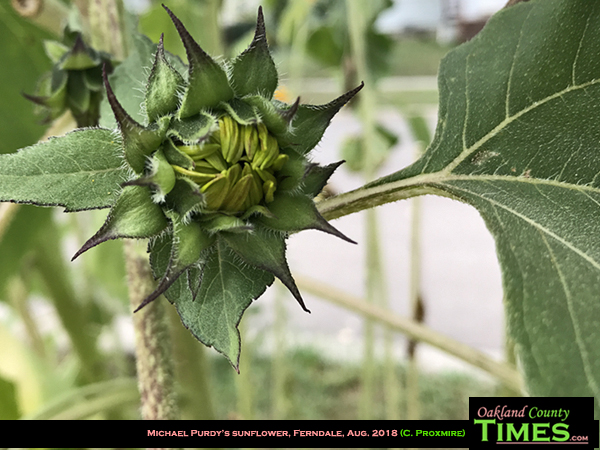 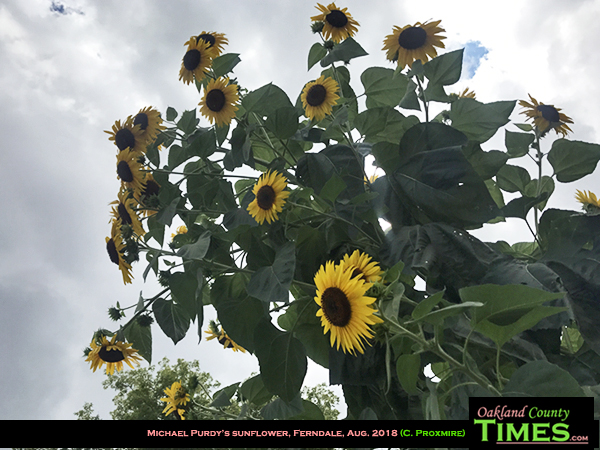 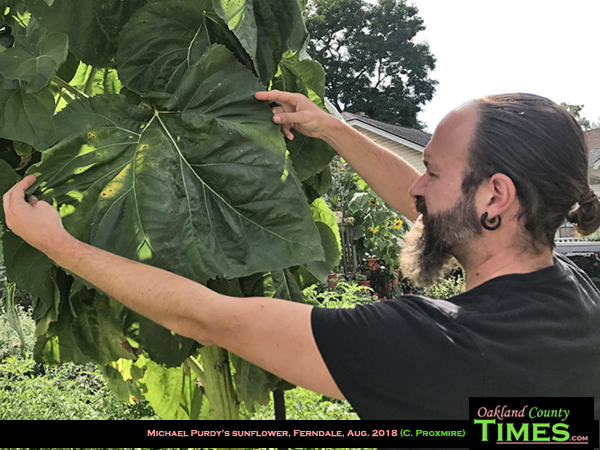 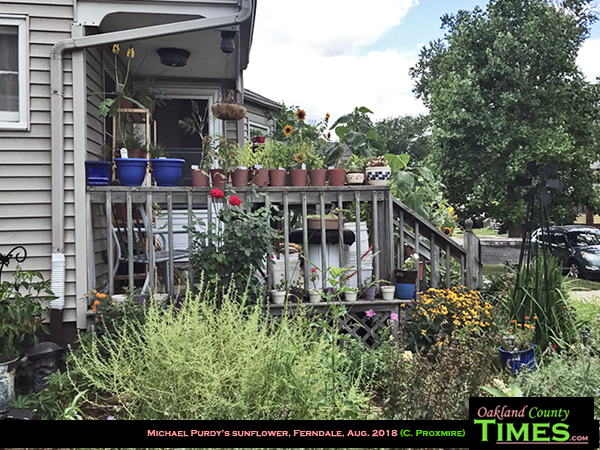 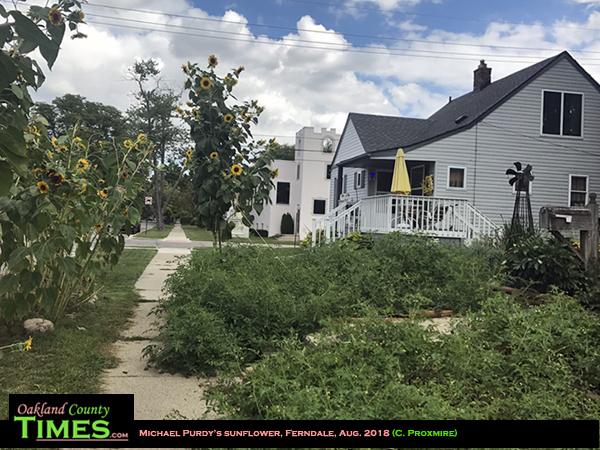 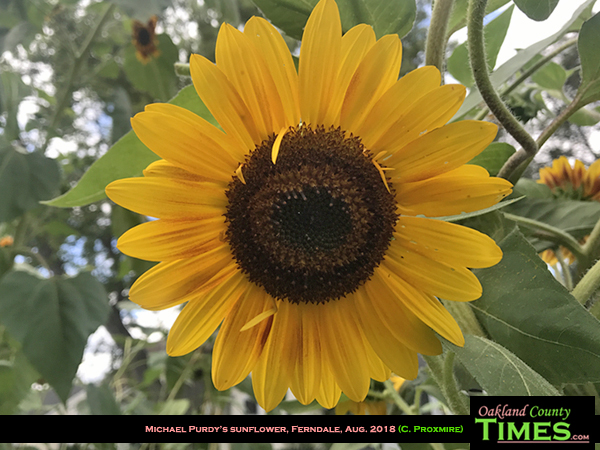 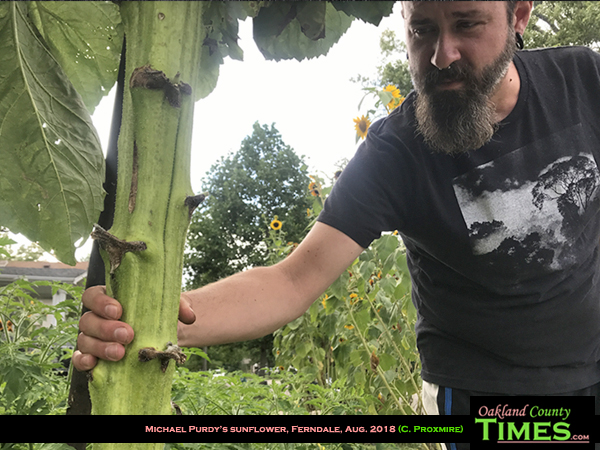