(Crystal A. Proxmire, July 18, 2018)
Ferndale, MI- The Ferndale Planning Commission heard updated preliminary plans for 34-acre former Hayes Lemmerz location at 8 Mile Road and Pinecrest which would bring a community full of homes, apartments, and other amenities to the former industrial site.  The Commission encouraged the developer to revisit aspects of their plan before bringing it back for a vote.
As part of a “Planned Urban Development” (PUD) project, the development company, Pinecrest Holdings, has been engaging with the city and the public since April when initial plans were presented. Originally

developers wanted to build single-family homes, but the Commission encouraged them to be more inclusive of housing types and amenities for the community.
Wednesday’s meeting was for discussion purposes, to give direction to the developer before asking for approval to begin a formal PUD application.
The proposal presented Wednesday, which has been sent back for revision, had a variety of home types, including apartments, loft-style homes and single family homes, adding 57 single family units and 282 apartment units.  It also included a 7,540 sq. foot community center, a neighborhood park, a 15,398 sq. foot daycare with 81 parking

spaces, 14,000 sq. feet of retail on 8 Mile Road, and two industrial buildings on 8 Mile Road (40,624 sq. feet and 40,000 sq. feet).
Among the rental units was a 9 story apartment building on the south side of the property with a parking garage, and a pair of smaller apartment buildings that would be three-four stories tall on the west side of the property.
Home types varied with pockets of different home sizes and styles that shy away from vinyl sided cookie-cutter facades. Garages would be off alleyways and streets would be welcoming for bikes, pedestrians and vehicles.
The proposal include

d a paved pathway called Passedena Pass that would meander east and west though the development, coming out to Mitcheldale Street near Aldi Foods to the west and Pinecrest to the east. This path also takes users through a pocket of trees that will be preserved on the property.
A masonry wall would buffer the neighborhood and Ferndale High School on the north side of the property, and the wall would continue alone the west side.  Both areas would have breaks for pedestrians.
Realtor Jim Schaffer from Keller Williams Metro is working as a consultant on the development to help ensure that housing types would meet demands.  “I’ve seen a lot of

building in this city and neighboring cities that is not very interesting,” Shaffer said.  “One of the most exciting things about this project to me is this developer is working to exceed the standard.”
Housing styles are varied, with some having creative facades and layouts.  “Don’t build boring,” Shaffer advised.
About 15 residents attended the meeting to share concerns about the development, with many questioning the loss of green space, the increase of utility usage, environmental challenges with the former industrial site, and the increase of density and rental units. City staff and representatives from the development team responded to those.
For example developers would be required to remediate the site, meaning remove or confine contamination. They would

likely apply for Brownfield Redevelopment funds that would essentially loan them the money for cleanup of the site. Developers would also be required to assess services such as electric and sewer needs, and addressing those would be part of the more detailed planning process. They did state they would include natural features on the site to help with stormwater issues, including bioswales and possibly underground retention that would slow heavy rain from entering the drainage system.
Spurred from discussions of the development, residents formed a group called Southwest Ferndale Neighborhood Association, with their initial task being representing residents in the development discussion.  According to Lynn Geiner there are 47 members with about 18 being active at meetings.  “How many people does it take for you to hear our voices?” Geiner asked after sharing concerns.

While some had suggestions for the development specifically, others questioned the need for more homes in Ferndale. Neighbor Catherine Ray said “What is this mad rush to change and add to our already vibrant community?  It seems unending and ridiculous.”
Others are excited about the project.  In a letter read by Father Charles Blanchard, penned by Father Michael Cadotte of Christ the Good Shepherd Church, Cadotte applauded the developers for “bringing their once industrial wasteland back to a vibrant part of our community.”
Planning

Commissioners made suggestions, which the developers are taking into account as they go back to the drawing board.
Planning Commissioner Brent Geurink had two main points.  “It doesn’t necessarily seem to me like it meets the goals of walking and connectivity,” he said.
He added that “A nine story building in the center was a little shocking to me.”
In regards to the larger apartment unit, Planning Commissioner Ian Williamson urged developers to consider the shadow it would cause for neighbors. He suggested that instead of having apartments facing north and south, that turning the building to give east and west views might minimize shadows and provide more scenic sunrise and sunset views for the residents.

Councilperson Dan Martin, who is the Council Liaison to the Planning Commission, suggested that instead of concentrating the affordable housing into one building, that it be dispersed through the neighborhood.
Geurink concluded by stating that “This is a chance to comprehensively look at a site, look at the design.  This has the right components, but it feels like many individual developments [instead of a cohesive one].”
Developers are optimistic that families will be interested in having homes close to Ferndale High School and Ferndale Middle School, which are just north of the site. The smaller homes

and rentals will appeal to those coming to growing Metro Detroit Area. Jeff Klatt of Kreiger Klatt Architects spoke of the Avenue of Fashion on Livernois, growth in other Detroit neighborhoods as well as forthcoming development at Northland Mall in nearby Southfield. “We are confident in this location,” he said.
Planning Commissioner Cristina Azar agreed that the plan needed some work to be more pedestrian-friendly, but is optimistic.  “I’m glad you mentioned regionality.  It’s an important corridor and I want to make sure we’re treating it right,” she said.
Pinecrest Holdings is taking the suggestions made by the public and the Planning Commission and will refine the plans.  The timeline is not set in stone, but Klatt estimated it might take about 60 days to return with revised plans for discussion. It is unknown at this time what changes will be made.
NOTE: Pinecrest Holdings made a Powerpoint presentation, but the file was too large to share. Images are photos from the presentation, which we hope to replace with more clear renderings if they become available. 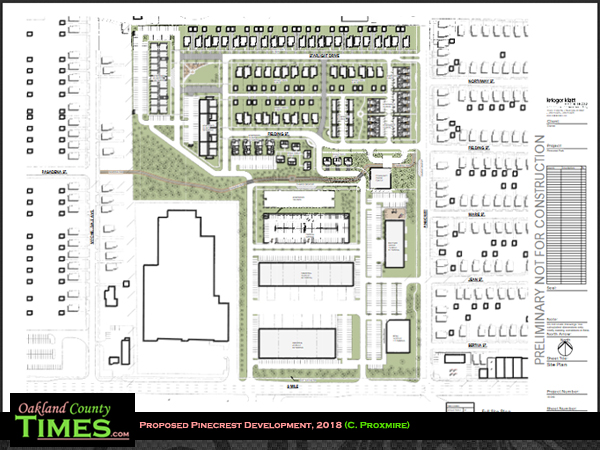 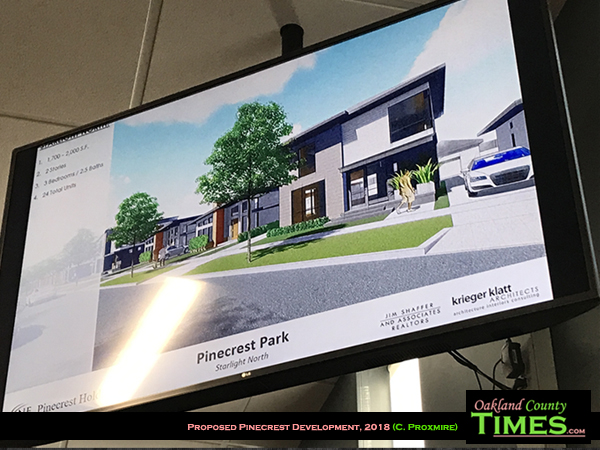 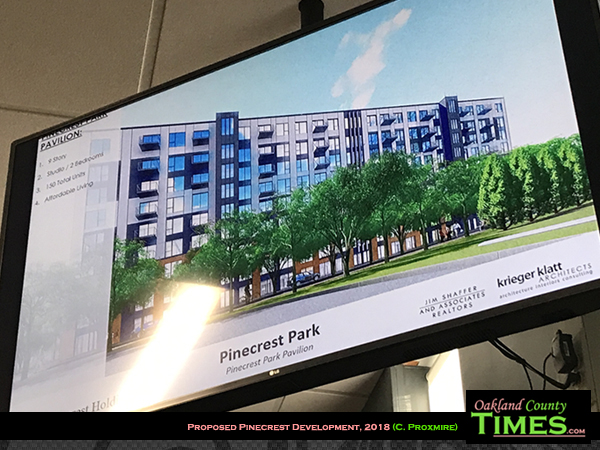 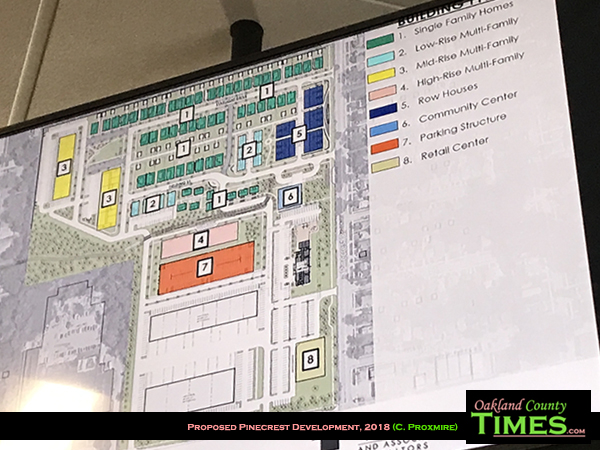 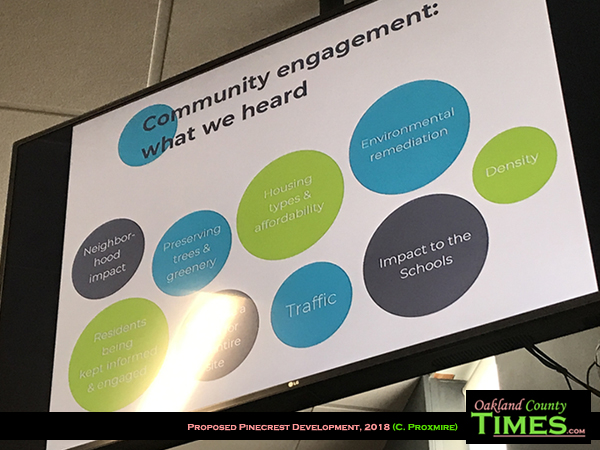 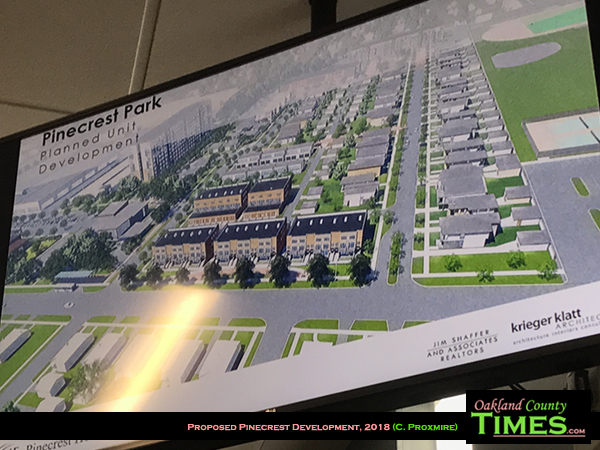 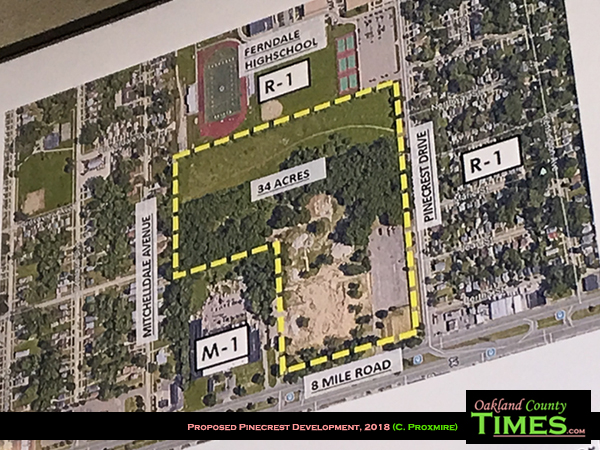 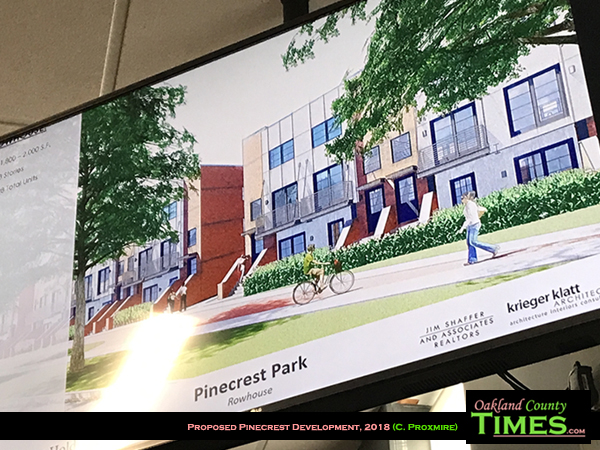 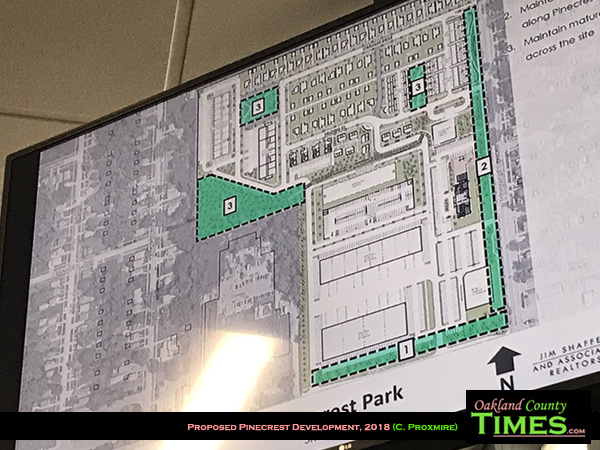 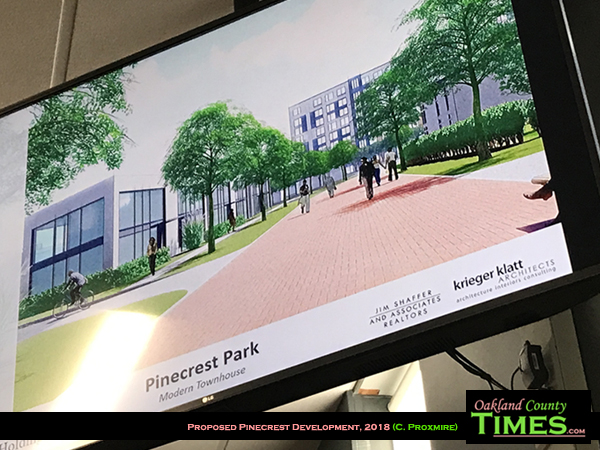