(Crystal A. Proxmire, June 28, 2018)
Ferndale, MI – Jordan Zuppke and Marina Chupac are two criminal defense lawyers with a dream.  In addition to a typical office, they wanted to bring Zupac Law services on the road – to give free legal advice to people at community events, and to visit people at their homes or businesses. To do this they’ve created Law Firm 2 Go, a mobile attorney’s office.
On Thursday the duo was one of four entrepreneurs who pitched their idea at Ferndale Soup – a crowdfunding dinner held at the Rust Belt Market. Ferndale Soup is modeled after Detroit Soup, bringing a simple fundraising opportunity to those involved.  Each attendee pays $5 at the door. They get to eat a community-style meal.  They hear pitches from the groups and vote

on who gets to keep the pot of money raised.
Wednesday’s event brought in $664 at the door.  And, on top of it, The Build Institute and Level One Bank each chipped in $500.
The votes were counted and Law Firm 2 Go was victorious, taking home $1,664 dollars that will be used to help them put a wrap on the trailer advertising their service.
“We want to take our advice booth all around Michigan, to infinity and beyond,” said Zuppke.
When asked what inspired the mobile law office, Zuppke said “Something inside me said do something different.  It’s very accessible to people.”
The mobile office is expected to make appearances at the Funky Ferndale Art Fair, Dally in the Alley, and other events.

Four pitches were made Wednesday evening.
El Tontos started out as a practical joke. Shane Hudson and Andy Chapman had been amused by speculation over what would happen to the shut-down Como’s Restaurant at the corner of 9 Mile and Woodward Avenue. So they decided to play a prank.  They created a banner for a fake restaurant called El Tontos (translated as The Fools) and hung a banner at Como’s just before April Fool’s Day.
“I woke up on Monday to a Metro Time’s article about El Tontos,” Hudson said.  “A week after we announced it was a joke WDIV asked us to come on their show with a chef, which we declined.”
The prank got lots of social media attention and the pals used that to create a fundraiser.

They sold El Tonto’s tee shirts and were able to donate $800 to Affirmations Community Center.  Their idea is to grow the brand into a series of pop up events, with each one raising money for a different charity.
Also pitching a pop-up food project was Spacecat Vstro, a vegetarian comfort food pop up envisioned by Shelly Carlisle.  As Carlisle searches for a brick and mortar space, she is doing pop up dinners at other locations, featuring plant-based versions of chili mac, chicken and waffles, spaghetti and other creations.  “I live in Ferndale and I’ve never felt at home in a city until I moved here,” Carlisle said.  Her hope is to raise money to bring Spacecat Vstro to community events.
Forever Fosters also made a pitch Wednesday night, with Operations Manager Patty McCormick talking about the program which is part of the Ferndale Cat Shelter.  With Forever Fosters, hard-to-place felines are paired with low-income seniors and other people who might

benefit from having a furry friend but may not be able to afford it.  Forever Fosters pays for the cost of food and veterinary care in order to give the creatures a good home.  “One example of a cat is there were two cats in a home and the owner passed away. Cats were in the home for a few weeks. No one knew they were there. So they were sick and it took a lot of medical care to save them.  One of the cats was adopted to a man who came home from the war that has PTSD, and now they are best buddies,” McCormick said.
Detroit Soup started in 2010 and has raised over $140,000 for community projects.  They launched a spin off called Livernois Soup, and this was the first Detroit Soup-connected Ferndale Soup event.  Detroit Soup joined the Build Institute in December.
Local businesses helped make the event possible, including Pops for Italian, Blumz, Patchwork Collective, Howe’s Bayou and Western Market.
“I’m really excited this is happening here,” said Candlewick Shop owner Jacki Smith who emceed the event.  “I hope we can do another one here in Ferndale.” 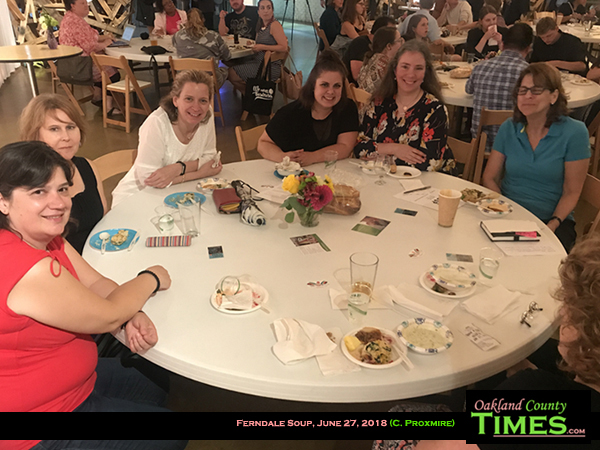 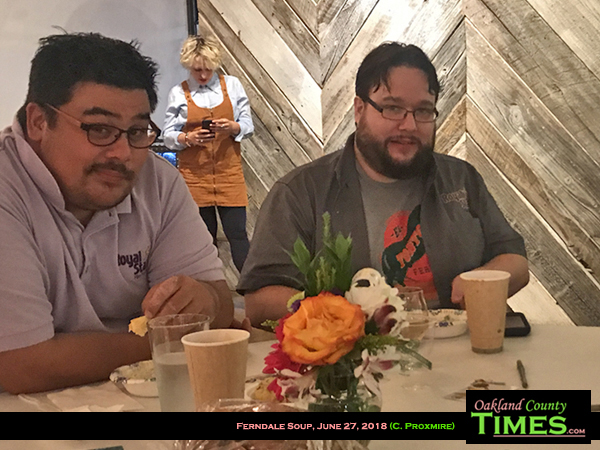 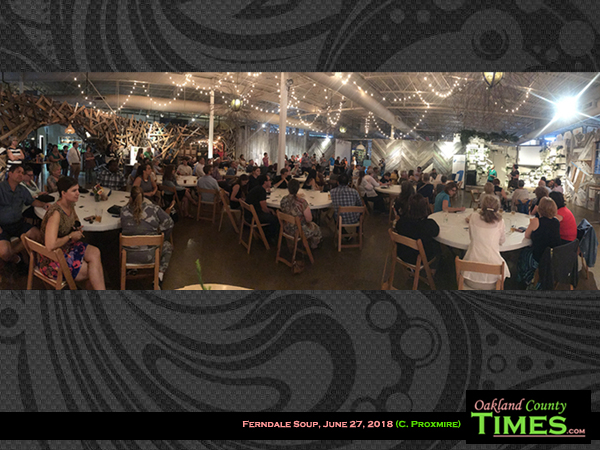 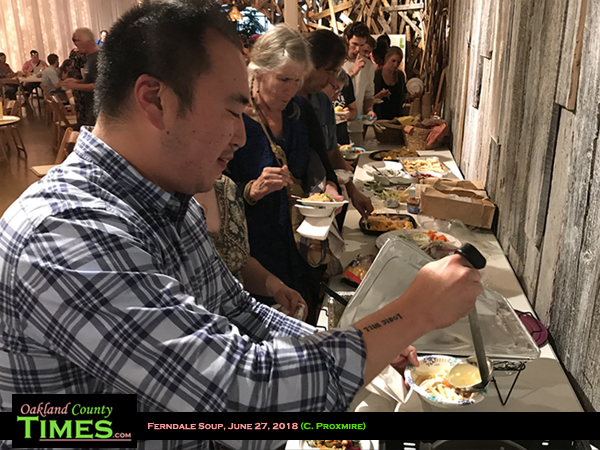 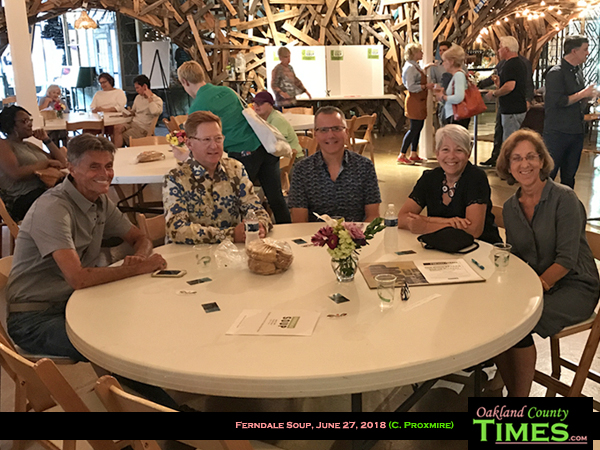 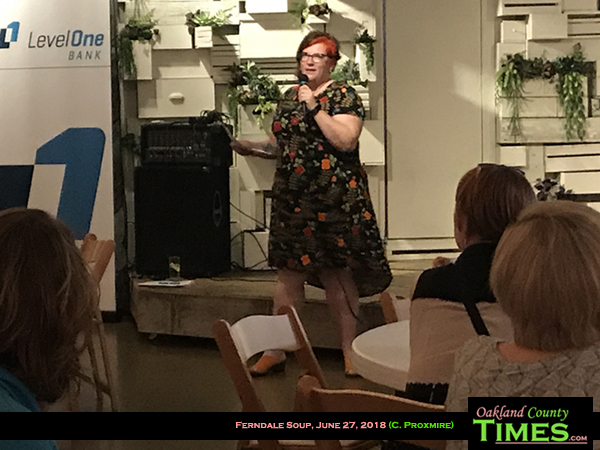 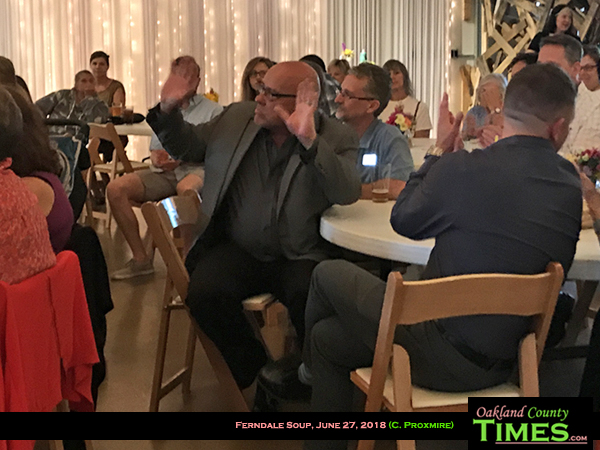 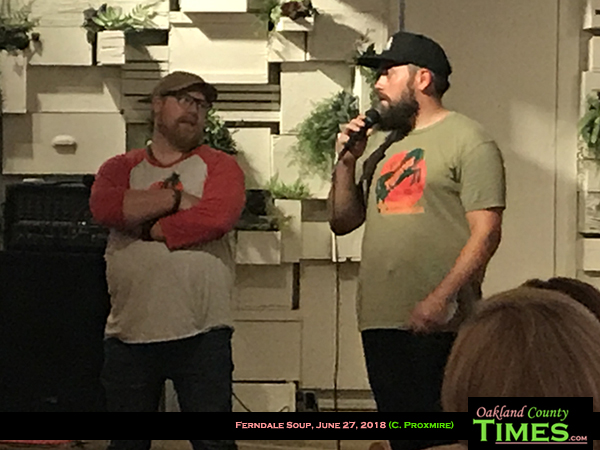 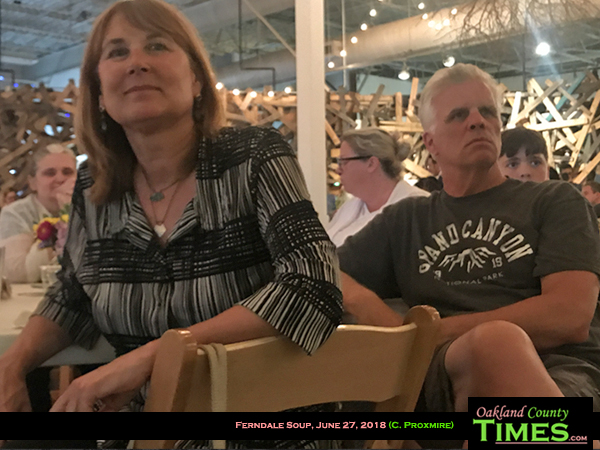 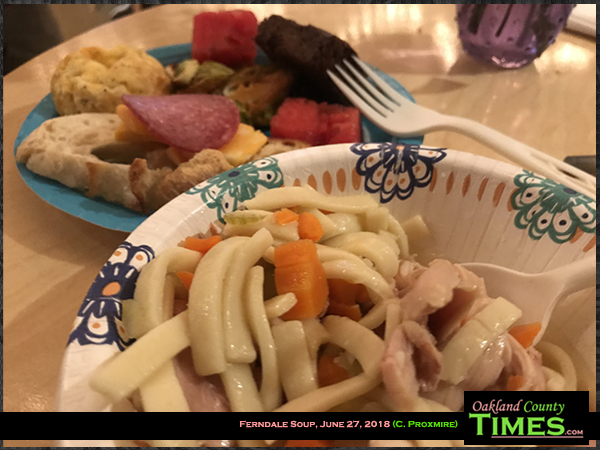 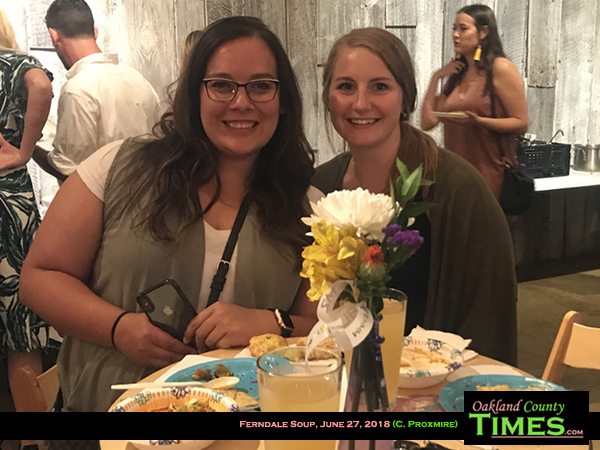