(Troy Fire Dept, June 26, 2018)
Troy, MI- A nesting pair of Cooper’s Hawks had been attacking residents on Hempstead Street in Troy for some time. After multiple citizens were injured from these attacks, and with no one in which to turn, a firefighter from the Troy Fire Department offered his assistance.
This firefighter, who wishes to remain anonymous, is federally licensed to handle birds of prey. He contacted the appropriate agencies and offered his assistance. Approval to remediate

the situation was granted by multiple federal agencies.
After inspecting the nest, one chick, approximately 15 days old, and two damaged eggs were discovered. The eggs and nest were removed from the tree and destroyed. The healthy chick was secured and is currently receiving proper care.
With the nest removed, the adult birds should leave the area, and residents will no longer have to watch the skies in fear. Once the chick matures, it will eventually be released back into the wild.
NOTE:  Police/Fire Reports come directly from the Police Department or agency involved and are written by the person or agency listed below the title.  We generally run these “as is” or with minimal editing for punctuation, spelling, etc. Suspects should not be presumed guilty.  Those needing more information about a case are encouraged to follow up with the reporting agency or court system for the most current information.
Want to be on our email list? Go to http://eepurl.com/bv-2vr. 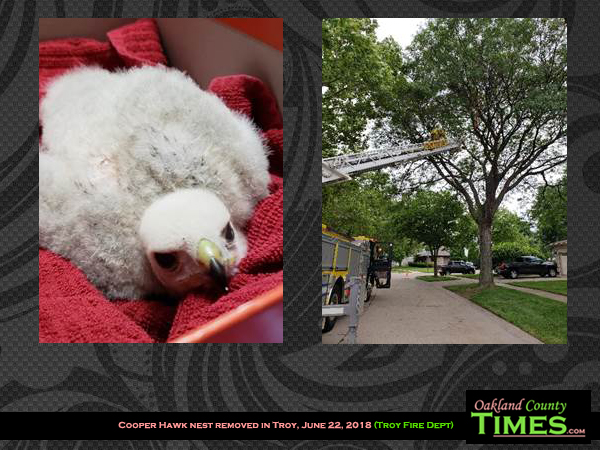