Oakland County’s Silver Tsunami is Real: A Look at the Data

Oakland County’s Silver Tsunami is Real: A Look at the Data

(Kurt Metzger, April 18, 2018)
Pontiac, MI- The Census Bureau recently forecast that the nation’s seniors (persons 65 years and over) would outnumber the nation’s children (persons under 18 years of age) for the first time in history by 2035. After recently reporting about the aging of our state and the number of counties experiencing a greater number of deaths than births, I thought it would be interesting to take this national forecast and see how it is playing out in Michigan and a variety of the more urban counties across the state.  Utilizing new population forecasts from the Michigan Department of Transportation (MDOT Planning, Statewide & Urban Travel Analysis Section and University of Michigan Institute for Research on Labor, Employment, and the Economy (or IRLEE), I discovered that Michigan and a number of our counties will experience this shift much

earlier than the nation.  While I will be looking at the state in an upcoming article, I decided to start out with my home county of Oakland.
Figure 1 utilizes recently released data to show Oakland County’s vital statistics history from 1980 to 2016.  The children of Baby Boomers were coming of age in the 1980s, resulting in a mini-boom (the Millennials) in the late 1980 and early 1990s.  The figure shows that births reached their highest point in 1990 with a total of 17,008.  When combined with a relatively low number of deaths, Oakland County experienced a natural increase of 9,318 residents.  Demographic trends, including delays in marriage, smaller families with fewer children, and an aging population, have resulted in a steady decrease in births combined with a steady increase in deaths.  The result has been a gradual decrease in the amount of natural increase that is contributing to population growth. While births have increased slightly over each of the last 4 years, deaths have increased as well.  Natural increase has remained below 4,000 over each of the last 7 years.  The total of 3,124 in 2016 (latest available) is a mere 33.5 percent of 1990’s total.
Figure 1.

The best way to visualize the changing age structure of Oakland County is through the use of population pyramids.

Figure 2 shows the pyramid in 1990 when births were reaching their high point.  If you look at the bottom of the chart you will see that the three sets of bars increase in size with decreasing age.  While well behind the 4 sets of bars that represent the baby boom (ages 25-44 years), the 0-4 years bars for both males and females are longer than any other.
Figure 2. 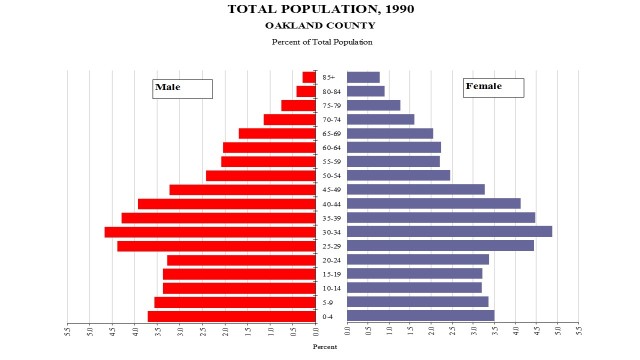 Figure 3 moves us forward to the year 2010.  The oldest boomers are now in the 60-64 years category, and their bars have become smaller relative to the next three as a result of increasing deaths.  The youngest cohort in our 1990 pyramid are now between 20 and 24 years of age.  One can see that the steadily large number of births during most of the decade of the 1990s resulted in larger cohorts between 10 and 19 years of age.  The economic downturn we experienced after 2000 led to a great deal of out-migration and a relatively rapid reduction in births.  This is reflected in the decreasing size of the two youngest cohorts.
Figure 3.

Figure 4 brings us to the most recent age estimates for 2016.  While we have only added six years to the analysis, we

are able to see that the trend established in the previous decade has continued, with the 5-9-year-old cohort running 7,000 persons fewer than those 10-14 years of age, but more than 2,600 larger than the 0-4-year cohort.  We can now see the bars lengthening with age – the longest bars belonging to those between 45 and 64 years of age, and the 65-69-year bar not far behind.
Figure 4. 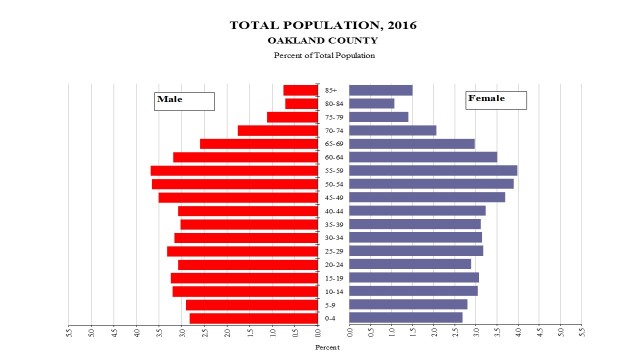 Oakland County’s age trajectory is clear.  Unless the county can engineer a large influx of young migrants – both domestically and internationally – who both bring children with them and give birth after they arrive, baby boomers will continue to dominate the demographic landscape and the county will continue to age.
This future is made very clearly by MDOT’s population forecast.  Figure 5 lays out the future for Oakland County in terms of its ratio of seniors to children.  The monumental change that the Census Bureau predicts for the nation in 2035 is forecast to reach Oakland County (and the State of Michigan) ten years earlier!  When the U.S. makes the crossover, Oakland County is forecast to have 63,000 more seniors than children.  While this shift means a great deal for business, service delivery, tax base, etc. (discussed below), it is important to note that the working-age population (those supporting the “dependent population” of children and seniors) will drop by less than 3 percent (about 20,000 persons) between now and 2025.
Figure 5.

Now that we know what to expect demographically, how will an aging population affect Oakland County?

The aging population is often stereotyped as a burden and their detrimental impact on the economy is exaggerated causing their significant societal contributions to be overlooked.  Seniors make positive contributions to the community through their services. As the life expectancy has drastically increased, most of the baby boomers will retire while they are still physically and mentally healthier than preceding generations. In the past women provided much of the volunteer work in the community, compared to today where women are in the workforce in increasing numbers. At this time, when the contribution of volunteer workers is becoming increasingly important, many health and welfare agencies are seeking to hire from the growing number of retirees.
Voluntary services are a measure of social capital and an indication of a healthy civil society. It has been commonly observed that the majority of volunteers tend to be elderly. Therefore, through volunteer services, the elderly substantially minimizes government expenditures on welfare, aid their families with childcare, and find satisfaction in providing various other charitable services. The satisfaction of volunteering is very high and reports have shown this.

The older generation are actively involved in the community as being members of clubs. They also attend musical concerts, theaters and art galleries more frequently than younger people, read more and visit libraries more often. Thus it is probable that the arts and culture will benefit from an older Oakland County, and an older Michigan.
As a general rule, it is likely that older communities will become more law abiding, since older people are less inclined to commit crime, resulting in money being saved on prisons and policing costs in the future.
Older people tend to play a role in supporting and maintaining informal social networks, which in turn bind communities and families together. Older people are said to be net providers (up to the age of 75 years old). This is due to the fact that they provide childcare, financial, practical and emotional assistance to family members, including helping people outside the household with the tasks of daily living.
Grandparents now play an important social role in a time where people tend to have more living parents than children. This benefits grandparents directly, as they find that this is an

important aspect of their lives and makes them feel fulfilled. Not only does it benefit the grandparents, but also their grandchildren considerably.
In addition, the aging population gives opportunities for the economy to respond to the needs of the older generation, by creating more jobs. A study on consumerism indicates that the consumer will spend considerably less on non-essential items and substitute to more essential items like spending money on grandchildren, leisure and recreation.
Housing options for an aging population will be critically important for communities to consider. The desire to “age in place” means that communities will be faced with the need to create senior housing so that individuals can sell their large homes and still stay connected with neighbors. When such housing is not available (as in Pleasant Ridge), there will be a need

for in-home caregivers and other service providers to be available to support the elderly to remain in their homes.
Needless to say, healthcare will become increasingly important
Finally…a couple of policy considerations….
Transportation – increased options for door-to-door pickup for short trips to doctor, shopping, etc. (SMART already doing well). Not sure whether aging will be good for UBER, LYFT and other such operations. Will the elderly support transit taxes?
Assistance – the recession, coupled with the loss of 401ks, pensions, etc. has left a large number of elderly without the retirement resources they had planned on. This will result in a need to work longer (how does age discrimination in the workplace that we are hearing about now play into this?) and/or rely on assistance for basic needs.

Education – school closings and consolidations will become more necessary moving forward, due to a decreasing student-age population. The ability to pass school millages will become more difficult as an aging population must deal with taxes that will become a larger overall financial burden.
Let me finish with a personal note.  I was part of the Male, 65-69 years, bar in the 2016 pyramid.  I am proud to be an active senior, still working part-time, healthy and active, enjoying libraries and cultural activities, volunteering as mayor of Pleasant Ridge, and having the time of my life with my four grandchildren (all local).  I retired from Data Driven Detroit at the end of 2013 to make way for a younger generation to take the reins.  While I have much more to give, Oakland County’s future depends on attracting and retaining a significant number of younger residents.  A strong, successful community, or county, must be attractive to all segments of the population.  Oakland County meets that criterion.
Kurt Metzger is the Mayor of Pleasant Ridge, and founder of Data Driven Detroit/.

Making the Call for Ozone Action Days: How the Decision Happens, and Why
August 11, 2022
Search Our Site