(Crystal A. Proxmire, April 18, 2018)
Holly, MI – When people think of veterans, many words and images come to mind, but artistic is not usually one of the first.  But the volunteers at the Holly Area Veterans Resource Center know better.
“Veterans are here, and veterans are talented,” said Paul Dery, one of the organizers of the Holly Community Art Show earlier this month.
The

show gave veterans, students and local artists a chance to come together and share in the healing, connecting power of creativity.
“This event is more about finding veterans or their family that are out there and don’t know about us yet.  Even if we didn’t sell anything, if we can connect with even one veteran and make them feel welcomed then this event is worth it,” Dery said.
Booths lined a well-lit community room in the Karl Richter Center, with everything from custom-sewn children’s dresses, maple syrup, wood-carved birds, paintings and photography.
William Schranz is a Veteran Navigator in Macomb County.  His job helping connect veterans with services they need. As a veteran himself he understands the stresses one faces when coming home from service.  After serving in the Navy he struggled with PTSD, but he saw

his struggles as a chance to help others.  He served veterans in Chicago before moving to the Detroit area.  He began to paint as a way to process his thoughts and feelings.
One painting is of Abner Garcia, one of many veterans Schranz knew after the service who was set on doing good work in the community.  They both worked in Chicago, in a program that connected veterans with teens who were in gangs but seeking a better way to live.
“He was driving home one night from dinner with his family, when someone pulled up and shot him,” Schranz said.  The killer was never found.  “I didn’t have time to process, there was so much work to be done with the kids, and the vets.  I didn’t know how to deal with the feelings.  He was the first person I knew as a vet that I had lost,” he said.  “Art therapy

helped me to think about Abner, and mourn him though a process.”
A painting titled “142” shows a ship on large waves in a storm.  The metaphor is obvious and simple, with the waves representing his emotions as he struggled through the storm of anxiety and depression.  The number 142 was the number stamped on the antidepressant pills he was on at the time of the painting’s creation.
Schranz now runs a Facebook group for Veterans to share their art with each other called Veterans Art Collective.
For eleven-year-old Lliva Hughes, the love of art was discovered early in life, thanks in part to a grandmother who like to paint and is passing down her knowledge.  The Holly Community Art Show was her first

show ever, and she brought a variety of pieces to share.  Her favorite was a green dragon painting. But there were also little gray mice magnets, bookmarks and colorful snakes.  She also offered her services as a face-painter.
“I like the freedom of painting,” Hughes said.  “It’s better than marker or colored pencil because you can experiment more.  If you make a mistake you can paint over it.”
Across the room from the young artist were two women who love making cheerful art collaboratively.  Holly Vauter from Fenton and Lisa Arcand-Perkins met five years ago at a child’s birthday party.  “Right away we knew we had a lot in common, and when we saw each other’s art we just knew,” Vauter said. After five years of making homemade gifts, décor, and journals they decided to take their hobby on the road. This was also their first art show.
“It’s exciting,” Arcand-Perkins said.  “Our families have really been encouraging us to do this. So it feels great.”
Mike Mishler is more experienced with art shows and selling his photographs of beautiful places in Michigan.  The talk of the show was an image of the Mackinac Bridge in the distance behind mounds of the much-publicized blue ice which only occurs when weather conditions are just right.
The Holly Area Veterans Resource Center connects veterans with support services.  Now in their third year, the center continues to add more services and hours of availability.  Learn more at https://www.facebook.com/HAVRCKRC/.
For more Holly news and events, CLICK HERE.
To sign up for daily headlines, CLICK HERE. 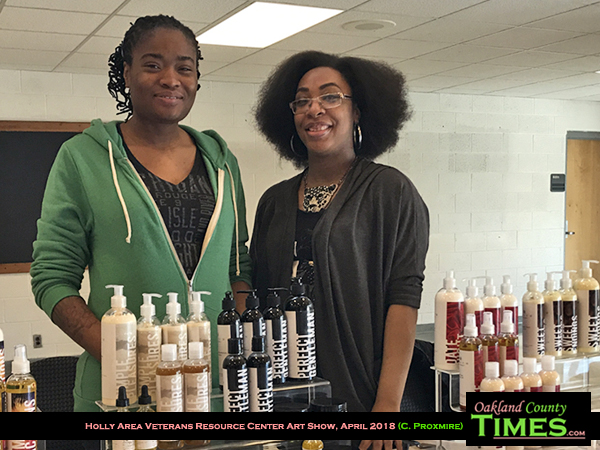 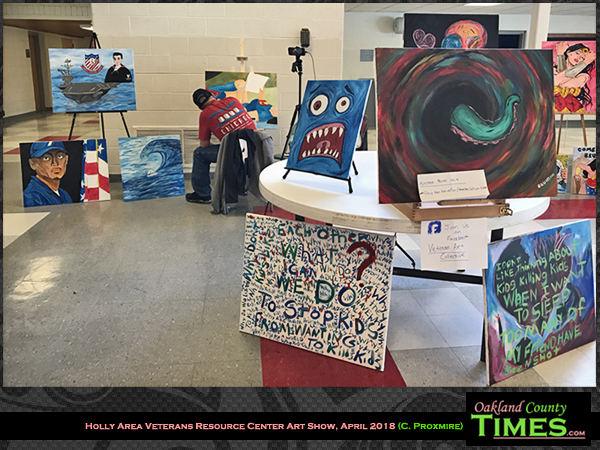 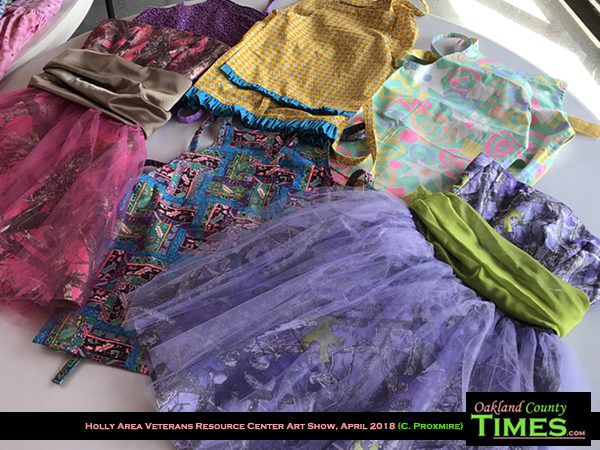 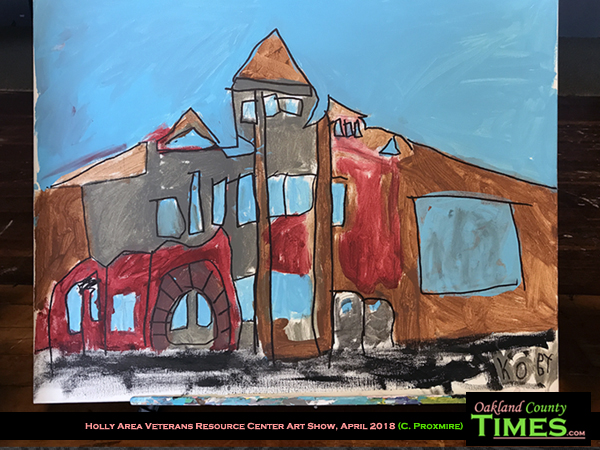