(Auburn Hills Fire Dept, March 25, 2018)
Auburn Hills, MI -At 10:01 pm Saturday evening the Auburn Hills Fire Department was dispatched to the Five Points Apartments located at 3300 Five Points Drive for a reported structure fire. Personnel arrived on scene and found dense dark smoke coming from the second and third floor of a three story apartment building. The Five Points Apartments is a new apartment complex with several buildings in various stages of construction. The fire was burning in a building that is not occupied by residents. Portions of the interior of the building are not covered by drywall which allowed the fire to spread rapidly.
The incident was elevated to a 4th alarm which brought in additional fire personnel and resources from multiple fire departments in the region. Fire fighters initially entered the building to fight the fire. As the building conditions deteriorated rapidly, fire personnel were

evacuated and the incident was moved to a defensive operation. The building suffered extensive fire damage, with portions of the second and third floors collapsing. Fire personnel were challenged by the conditions of a construction site and temperatures in the single digit range with the wind chill. The fire was brought under control at 12:28 am. Fire personnel remained on the scene until 4:30 am Sunday morning.
The cause of the fire remains under investigation. The construction manager reported that several propane heaters were in use inside the building prior to the fire starting. The heaters are used as part of construction process when the drywall is hung on the walls. The heaters are normally placed a safe distance from flammable materials. Fire investigators from Auburn Hills and the Oakland County Sheriff’s office are investigating.
Fire personnel from Rochester Hills, City of Rochester, Bloomfield Township, Independence

Township, Orion Township, Oakland Township and Waterford Regional assisted on the scene. Personnel from Oxford and Addison Townships provided coverage for the city during the fire. STAR Ambulance provided EMS coverage. Auburn Hills police personnel provided traffic direction in the area.
An Auburn Hills fire fighter suffered minor injuries after slipping on ice on the scene. The fire fighter was treated at Crittenton Hospital and then released. No residents were displaced from the occupied buildings in the complex. 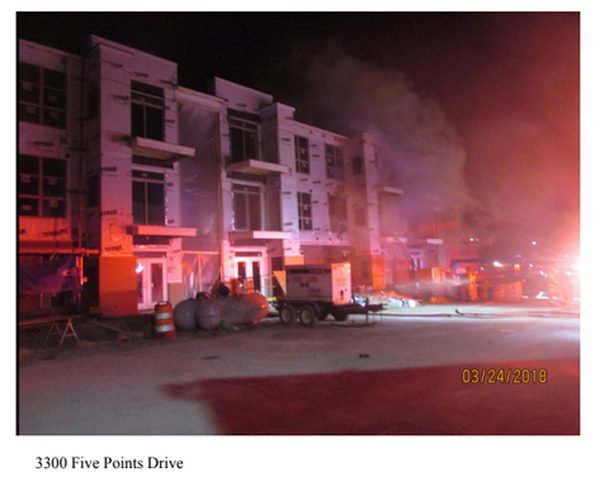