(Crystal A. Proxmire, March 13, 2018)
Royal Oak, MI –  Since 1999 W. Harrison Avenue in Royal Oak has been capped off at Woodward to house a large clock tower with digital billboards marketing various businesses and community events to passers-by on Woodward Avenue. The Jim Fresard Clock Tower and screens have ceased to function, and the City Commission was presented with an option Monday – approve letting go of the land so it could be sold to a sign company, or begin the process of requiring the tower to be removed.  Commissioners voted for the later.
The history of the tower, the public-private partnership that fostered it, and the most current proposals all have some complexity.  The future is not necessarily clear either. But the decision

does require removal of the tower within one year’s time.
The city will maintain control of the Harrison Avenue land, the Fresard Family will keep their property (or chose to sell) and the partnership regarding the shared land use will end.
The Fresard Family can move the tower or demolish it.  If they fail to do so, the City can remove it and charge the expense to the tax rolls of the adjacent Fresard property.
The Fresards can keep the land or sell it. They can also let the property go into foreclosure which would give the City first rights to acquire it from Oakland County once it goes through the foreclosure process.
Jim Fresard, who passed away earlier this month, invested in building the tower  both to

advertise his series of car dealerships as well as to help the city give a boost to a neighborhood that had suffered due to a previous business at that location.
In the late 1990s, there was a Japanese Sauna located at the corner of W. Harrison and Woodward.  With little parking, customers of the sauna used the residential street.  Illegal sexual activity was common at the business, and neighbors often cleaned up pornographic material, drug and alcohol related items and sexual items left by patrons on the street and behind the business.
The business was raided and the property was among the assets confiscated. Faced with an “odd property” with “zero parking,” yet incredible frontage on Woodward Avenue, the most likely use seemed to be a billboard.

Jim Fresard, proprietor of several car dealerships in the area, stepped in hoping to put the property use in a way that would solve several problems for the city.  Instead of just a small billboard on the odd lot, W. Harrison could be closed to through traffic and clocktower could be built.
At the time residents rallied behind the plan because it reduced cut-through traffic and improved the area.  There was even a neighborhood party celebrating the lighting of the tower.
Over the years the happiness faded.  Neighbors disliked the bright lights. And when the Fresard Family faced losses during the recession, upkeep of the sign and the property declined. By 2012 most Fresard properties had been sold to the Suburban Collection of car dealerships.  The clock tower property remained in the family, and was put up for sale.  A 2012 article in the Daily Tribune describes challenges they had with the Michigan Department

of Transportation who said that permits to the state had gone unpaid and that the signage must be removed.  The lights were turned off but the structure remained.
Arbor Valley Outdoor is a sign company that proposed to purchase the property from Fresard and to acquire the property at the end of Harrison by asking the City to vacate Harrison Avenue and give up ownership rights.
That vacation request was before the Commission on Monday.
Arbor Valley presented their plans which would have included a $50,000 payment to the city, improvements to the digital billboards including reducing brightness of the sign and shielding the neighborhood better from the light, and making the area around the sign a pocket park. They also offered a percentage of screen time to the City for public announcements and to the

Royal Oak Chamber of Commerce for the promotion of local businesses.
Commissioner Patricia Paruch and Mayor Michael Fournier were concerned that the proposal asked for the city to give up public property rather than a lease with Arbor Valley.  The sign company was firm that a lease would not work for them financially. They wanted full ownership.
A similar proposal was presented in 2016 and did not pass. The lack of control over the future of the maintenance and use of the property seemed to be the main reason for the denial Monday night.  “When we have a lease we have control,” Paruch said.
Paruch was also concerned about what would happen to the private property.  “We have very little control if this goes into the wrong hands.”
State Representative Jim Ellison, who was formerly Mayor,

recommended accepting the plan and vacating the land.  He said that with the tower gone the private property could be developed into something less desirable, such as a regular billboard.
Commissioner Randy LeVasseur agreed.  “This is a parcel that doesn’t seem to have a lot of purpose.  My concern is it become a blighted property,” he said.
Several residents spoke against reviving the digital signs on the clock tower, but also feared that Harrison would be re-opened to traffic. City Manager Don Johnson assured them that the City had “no intention” of opening Harrison up again.
Commissioner Kyle DuBac opposed the vacancy, because it was “not bringing a benefit to the neighbors and it has the potential to do harm to the residents.”
The decision was made to compel removal of the tower, which must be done within the year. The city will regain control of the property where Harrison city ends and will be responsible for maintenance.
Respect for the history was showed throughout the discussion. “It’s not an easy decision,” said Mayor Fournier.  “But it is in no way a reflection of the Fresard Family.” 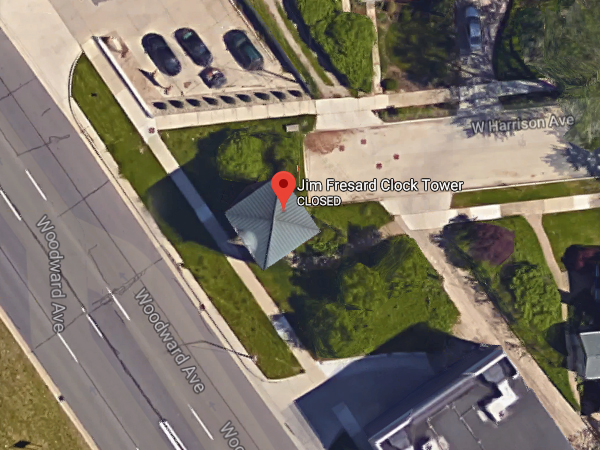