(Crystal A. Proxmire, March 7, 2018)
Madison Heights, MI – It was divine inspiration that called Judith Fletcher, aka “Lady J,” to start turning her 1996 Geo Prism into a work of art.
And it was at least a good coincidence that she was loading groceries in the parking lot of Meijer in Madison Heights on Tuesday, so we could share in her blissful story.
“I got this car and it was green. It was this emerald color that I thought was boring. And boring is not my style.

“So I said Lord, this car is boring.
“And the Lord said ‘put a heart on the hood,” Fletcher said.
“So I put a heart on the hood and I painted the gold wings on the side. And I was driving after I had done that and there was this boy and his father walking. The boy was all excited. He said ‘Dad, look at that car.’” The boy and his father smiled and waved at Fletcher as she was stopped at an intersection.
“I got such joy from that.”
Fletcher said that after seeing the boy, the Lord told her to add a lake and a park to make the kids happy. Then there were hula dancers, an American flag and the word “Jesus” in sparkly letters across the back. A “one way” street sign points to a golden cross, because, she said, “there is only one way to heaven and that’s through him.”

Other adornments include a row of rubber ducklings, miniature cars glued to painted-on roads, rhinestones and a decorated dashboard.
“Everything was in divine order,” Fletcher said, adding that the art developed over the entire “drooling heat” of the summer of 2016.
This was the first car she’d transformed, but her artistic background includes creating unique dolls and one of a kind denim jacket designs. She is also a member of The Detroit Fine Arts Breakfast Club. She named the car “Moving Art” and hopes it will inspire others to appreciate art.
“Art is important because it’s a gift from God,” she said. Fletcher loves when people wave or stop her in parking lots for conversations. “It makes me feel like a celebrity every day… It

makes everybody happy. Children, women, men. There’s something for everybody.”
Fletcher accepts donations for the upkeep of the car, and is fundraising towards having a lacquer finish put over the acrylic. “She runs pretty good, but she needs some TLC,” she said.
She tried unsuccessfully to sell the car in 2016. But has decided to put some money into it first. She said she’d like to put new brakes on it along with some other minor repairs, and seal the paint before trying to sell it again. She is open to selling it now, asking $3,000 (or more if someone is feeling philanthropic).
If Fletcher sells the car, she’ll be able to buy a truck which will help her move art to and from art fairs and shows easier.
Those who are interested in donating towards the upkeep or purchasing the “Moving Art” Prism can contact Judith at (313) 662-4114. 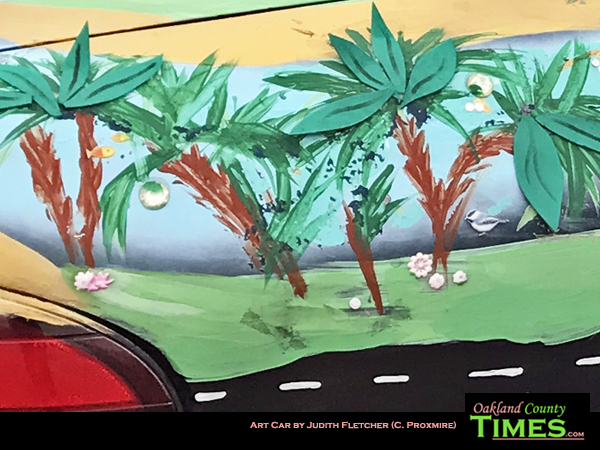 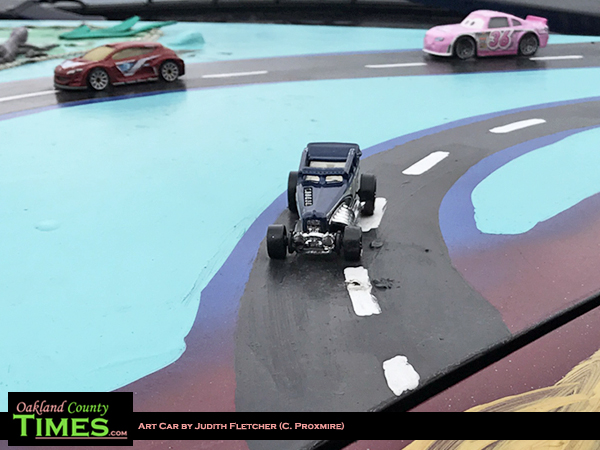 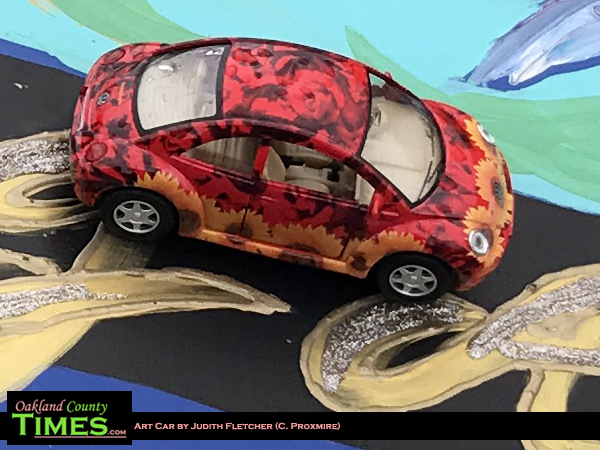 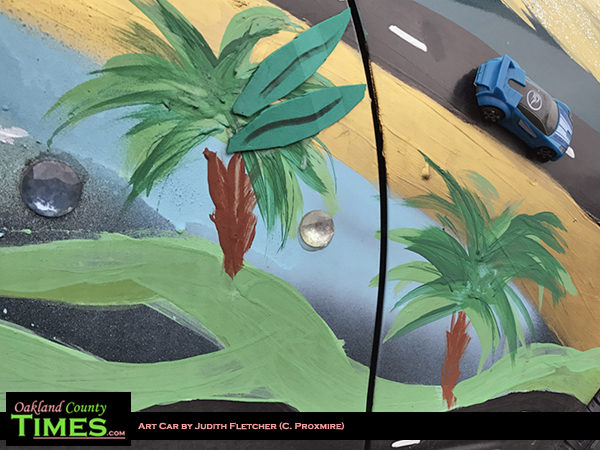