Crafting, Learning & Funding Feminist Causes
(Leslie Ellis, Jan. 21, 2018)
Ferndale, MI – Members of the Ladies Knitting Circle and Resistance League kept their eyes on their needles and their ears on their guest speaker during their most recent knitting night.
Re-energized by the country’s current political climate and ready to take renewed action, the women kicked off the year Jan. 11 by raising money for EMILY’s List and hearing from U.S. Congressional candidate Fayrouz Saad.
The Ladies Knitting Circle and Resistance League was founded by Ferndale residents Stacey Jamison and Becky Hammond in response to the 2016 election of President Donald Trump.

The group raises funds for progressive causes, periodically hosts speakers and gives like-minded knitters a way to connect.
“It’s for empowerment for women to make a difference in our corner of the world. What can I do?” Jamison said.
The Ladies Knitting Circle and Resistance League met regularly until taking a summer break starting in May.
“We figured people weren’t as pissed anymore,” Jamison said. “But people are pissed again. Every day is a new surprise.”
Hammond nodded in agreement. “What we thought would be awful a year ago is so much worse,” she said.
Meetings, which are held in the basement of Zion Lutheran Church in Ferndale, are relaxed

and informal. The ladies gather with their yarn and knitting needles and, if inclined, donate to the evening’s chosen cause. Jamison and Hammond said the Ladies Knitting Circle and Resistance League has raised several thousand dollars for groups including:
-Planned Parenthood
-American Civil Liberties Union
-Samaritas, a nonprofit that supports foster care and independent living
-Southern Poverty Law Center
-Emerge Michigan, which trains women to become political leaders

The league also has hosted speakers from organizations including Emerge, the Sierra Club and Samaritas, as well as its most recent guest, political candidate Fayrouz Saad.
Saad is running as a Democrat in Michigan’s 11th district. The seat is currently held by Republican Dave Trott, who will retire when his term ends this year. The race is being closely watched because of its potential to flip from Republican to Democrat.
“I hope I can give you all confidence in what you all are doing and raising money for,” Saad, who recently won Emerge America‘s Emerging Leader Award, told the knitters as she introduced herself.
Saad is the daughter of Lebanese immigrants who came to Metro Detroit in the 1970s and eventually opened their own small business, Saad Wholesale Meats in Eastern Market. She

attended the University of Michigan, earned a master’s degree from the John F. Kennedy School of Government at Harvard University and has served in government roles including Director of Immigrant Affairs for the city of Detroit, Presidential appointee to the U.S. Department of Homeland Security during the Obama administration and District director/legislative assistant to Democratic state Rep. Gino Polidori, with a focus on foster care reform and banning texting while driving.
Saad opened the discussion by sharing her experience as a freshman at U-M during the terror attacks on Sept. 11, 2001.
“My parents were worried there could be an anti-immigrant, anti-Muslim backlash on campus. They came and took me home,” she said.

For the next day or two, she missed all her classes. When she returned, her roommate and friends welcomed her back with open arms. For some, she was the first Muslim they’d met.
“We were there together. They told me it would all be OK. It was really a great experience for me to have as a freshman,” Saad said.
“I got into public service to protect the values that were displayed in my dorm room,” she said. “I’m worried that unity is being threatened by Donald Trump … When (he) got elected, I thought, what can I do to resist? What can I do to fight back?
“(But) it’s not just about fighting Donald Trump. It’s about defending progressive values,” Saad said of her campaign. “We can’t ever stop fighting for the American dream or take it for granted.”

Saad told the knitters that, if elected, she also would focus on expanding access to health care, empowering small businesses and offering more vocational/apprenticeship training programs to connect job seekers with opportunities, among other issues.
As the conversation shifted into a question-and-answer format, one audience member pointed out that Saad could be the first Muslim woman elected to the United States’ Congress and offered her encouragement.
“First and foremost, I say I’m a proud progressive,” Saad replied. “But, it is important to have a representative electorate.”

Right now in Congress, she said, only 19 percent of representatives are women and the average age of (Democratic House leadership) is 72.
“If you don’t see it, you can’t be it,” Saad said. “So, we need to change the face of leadership,” and elect more young legislators, women and people of color.
Paula Trzaskoma of St. Clair Shores listened while knitting a vibrant purple blanket. It was her first Ladies Knitting Circle and Resistance League meeting after moving back to Michigan from Maryland last year.
“I was looking to meet new people,” she said. “I’m a resister and a nasty woman and a knitter. I found the group and I’m like, ‘They’re my tribe!’ ”
Trzaskoma said the meeting was a great experience.

“It kind of has me fired up again. I was very fired up after the election and then it kind of fizzled. Now I’m fired up again,” Trzaskoma said.
“(Saad)’s not in my district, but it was interesting to hear the reasons why she’s running and what inspired her,” Trzaskoma said. “I think it’s fascinating all these people running for office. It feels like a new movement, all these people throwing their hat in the ring.
“I hope (the Ladies Knitting Circle and Resistance League) can be of help and encouragement to the groups we’re supporting monetarily. I hope we can help people like Fayrouz who are coming to speak by encouraging them and offering solutions and ideas,” Trzaskoma said. “My hopes generally for the country are that we can come together instead of being so divided.”

For more information and updates about upcoming meetings, “Like” the Ladies Knitting Circle and Resistance League on Facebook. 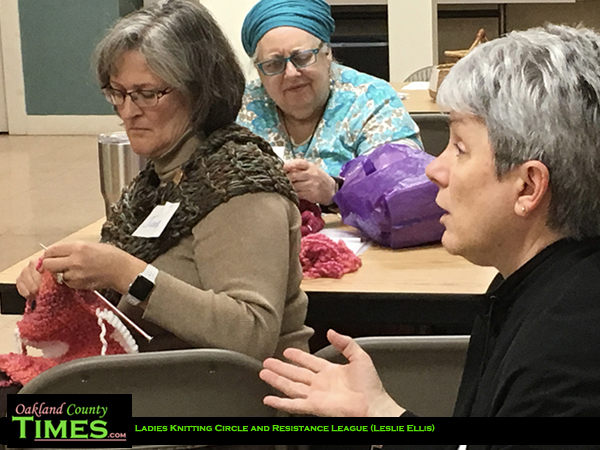 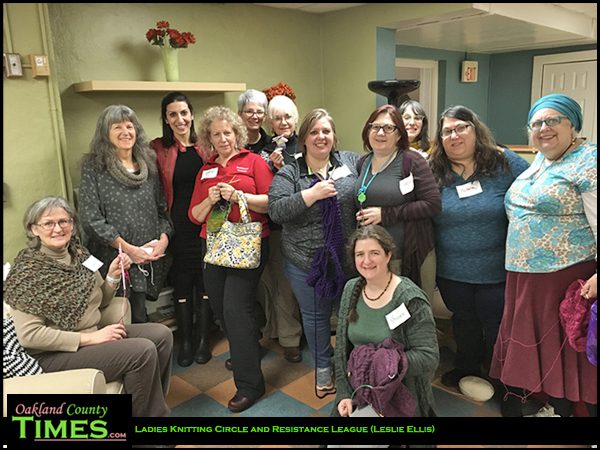 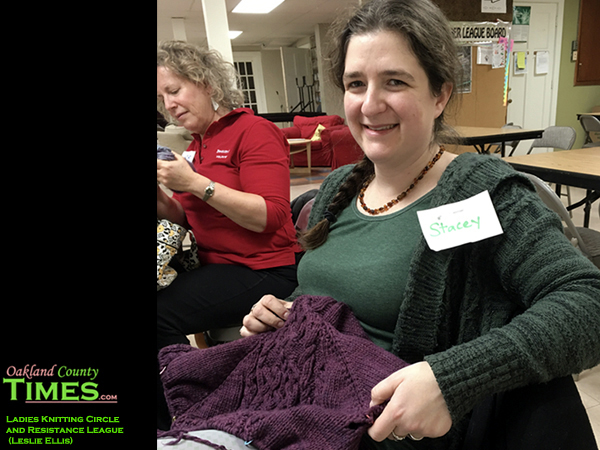 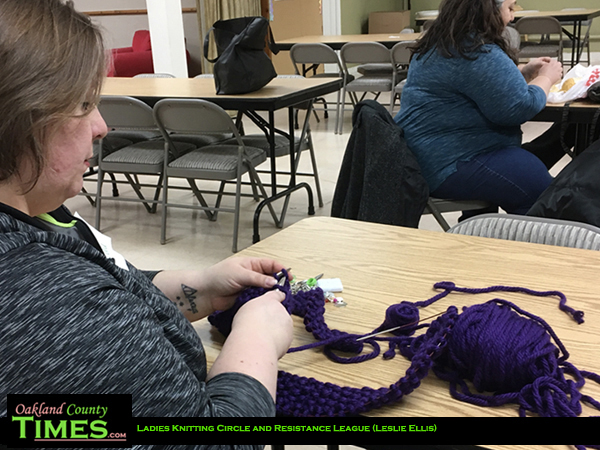 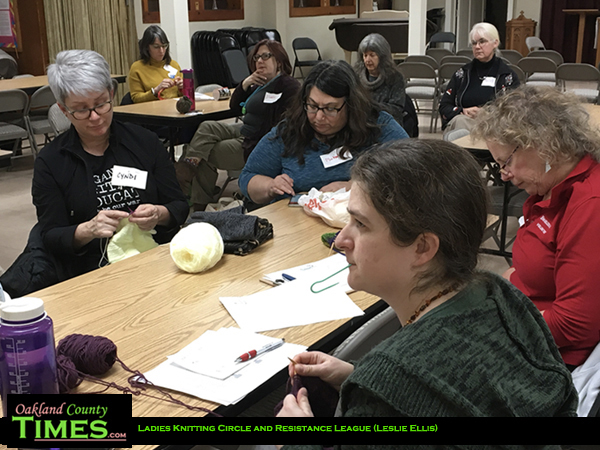 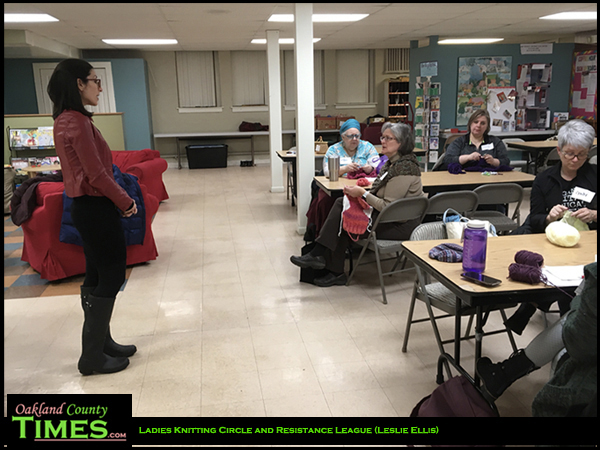 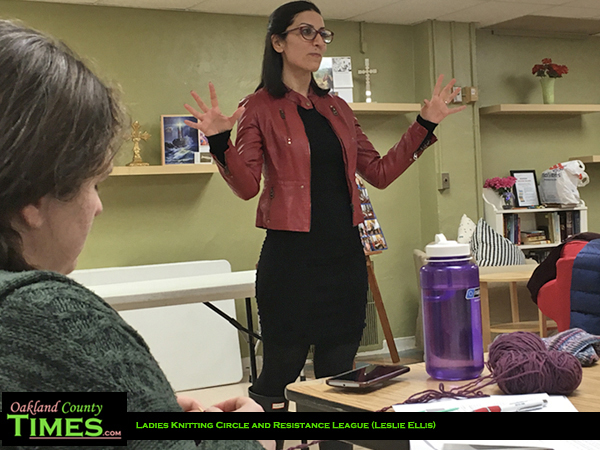 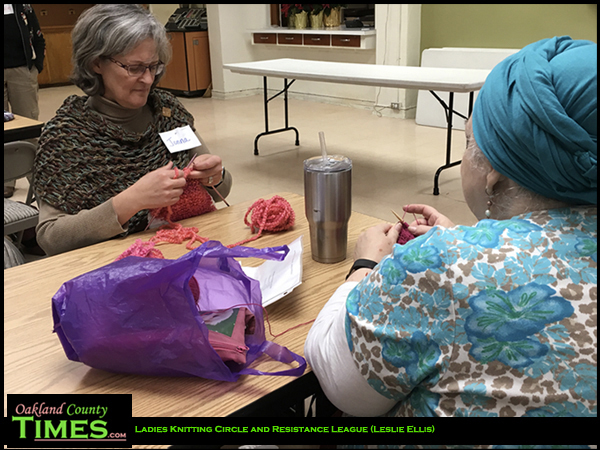