Ferndale Mail Carrier
(Cheryl Weiss, Jan. 9, 2018)
Ferndale, MI – Brightly colored signs with congratulatory messages along with pictures of mail trucks and mailboxes dotted West Drayton Avenue and other nearby streets in Ferndale throughout December in a special sendoff to retiring mail carrier Sharisse Jones. After nearly 32 years on the same route in Ferndale, she will be missed by many. For some residents, Jones is the only carrier they have ever known.
Drayton resident Roni Fare, also a retired mail carrier from another city, organized the
community surprise for Jones. “I think she deserves the recognition,” Fare said. “Sharisse has a beautiful smile, and she is focused on you when you talk to her. She does her best to get the right mail to the residents on her route. She is a wonderful woman; she deserves credit before she goes on to her next act,” Fare continued. “She really spent time getting to know the
community,

and they love her.”
The love and respect was evident, as neighborhood residents
eagerly agreed to join in the plans to honor Jones by creating large yard signs, writing heartfelt messages in the holiday cards they gave her, and surprising her with gifts throughout the month. Her last day was December 29, 2017.
As a retired mail carrier, Fare knows how difficult the job can be. She shared that in the last five to six years, the number of packages have increased as more people are shopping on Amazon and other online sites. In addition, carriers are expected to do more and expected to complete their routes in less time; they are expected to complete twelve hours of work in eight hours.
“Every route is different,” Fare explained. “You might have businesses, schools, and homes,
and you have to find your rest stops and comfort stops”. As a part of their routine, mail

carriers need to plan their restroom breaks. In the past, it was easy to find a favorite place to stop as necessary. However, after 9/11, places of business started locking their doors, and it was more difficult to find clean public restrooms.
In Fare’s location, it was harder to find a place because her route was a mix of walking and driving, and her area was more spread out than Ferndale’s homes which are close together. She had to drive twenty minutes to get to a restroom, then twenty minutes back to her route, which affected her time to deliver all the mail.
For Jones, however, it was easier to find places to stop nearby, but her route was all walking, with many porch steps to climb, and that takes a toll on one’s body over 37 years. Still, it’s always

bittersweet to say goodbye.
Fare gave Jones inspiration to retire. “It was time, it was really time. I was getting slow. My knees hurt, my hips hurt, it was hard to get up and down the steps, there was always something. I said to Roni, ‘I can’t do this anymore.’ She said, ‘Get out of there! I left before
you did!’” Jones said. “I knew it was time to go. There were new changes coming to the
system, and I wouldn’t be able to keep up. The kids run, and they expect the older carriers to
do the same, and we can’t. I decided, okay, it’s time. It’s time.”
In her last month, Jones was deeply touched by the congratulatory signs made for her along the route, from so many people she has known for 32 years. “I was fascinated, I felt very
appreciated. I have good days and bad days out there, as all of us do, and it felt warm and
inviting for all these people to take the time and put these signs in their yard.

There were signs
everywhere! I felt very appreciated. It really gave me a lot of warmth and appreciation, that
people would go that far,” Jones said.
Even people who do not live on her route made sure to see Jones on her last day. Sherri
Warner works at FIDO, and got to know Jones as she walked the dogs. They posed together fora photo, sharing smiles and best wishes.
The community connection Jones shared with the residents on her route went both ways.
Jones shared a story of a little boy who loves mail trucks. He greeted her every day, and he
would light up with excitement when he saw her truck. She decided to buy him a toy mail truck as a gift. In spite of her long hours, starting work early in the morning and working often until 8:00p.m., she went shopping for a little mail truck, and found the perfect one. He was

delighted, and so was she.
Jones also shares a story of a longtime resident, who seemed to avoid her the last couple weeks before she retired. She was concerned that she hadn’t seen him, and knocked on his door to check on him. He shared that his finances were tight, and he felt bad that he was
unable to buy her a gift, as he usually did. She explained that she cared about him, not a gift,
and she wanted to be sure to see him before she retired.
Over the years, she has seen many kids grow up. One sticks out in her mind: she watched a little girl grow up and go through nursing school. “All these people were growing up around me!” Jones exclaimed. Then there was the couple who gave her a picture of their kids every year. She has kept every single picture she was given. “You would not imagine how many gifts I keep! I keep everything, because it’s memories. This year, there were so many cards, and I

read every card because they wrote such nice wishes for me to enjoy my retirement.” It’s about the longtime bonds between all of them, that’s what mattered.
When asked if there were any problems with residents, Jones responded, “I never had
problems with people yelling at me. People get upset with occasional missed deliveries, and I
can understand that. It puts me in check, makes me pay attention to what I’m doing. But other
than that, no, never any problems.”
There had been a problem with a dog, however. She was bit by a dog once, a chow mix/black
retriever mix. “It happens, it’s part of the job,” she said. She wasn’t angry with the owner. “I
never stopped, I never changed my disposition. I was afraid of the dog for a while, maybe six

months. The dog would just see me in the truck and go nuts. I didn’t think I would ever get through it. Every dog I saw petrified me. Then, my husband bought me a dog. I learned the temperament, and I wasn’t afraid anymore.” Her dog, Jazzy, is a ten year old Maltese who does not understand retirement yet. She still wakes Jones up every morning at 5:00a.m., and makes sure she gets up, just like always.
Jones worked for the United States Postal service for 37 years total, as of December 27, 2017.
She had that route for just under 32 years. When asked what she liked about her route, Jones
said, “I’m quiet, the route is quiet, I enjoy hearing the birds sing, I try to find them in the trees. I love that.” There were no people chasing her, no dogs chasing her, it was peaceful, just what she liked. And, of course, the people. “Everyone over there is really nice, everyone.

Everyone!
It’s the kind of thing you want for all neighborhoods.” In addition, walking along the route
every year gave her gardening ideas. “I got so many ideas for flowers, putting certain colors together. I would walk by and say ‘Wow!’ I love flowers! It’s a beautiful place.” she said.
While her relationships with residents has grown and flourished over the years, there have
been many changes in the job.  According to Jones,” They (Management) want to pinpoint your every single move, which they didn’t do before.” Due to issues with some carriers not
completing their routes on time, and then calling the office to ask for assistance finishing the
route, new procedures were put in place. “They came up with scanners that can track you. At

first the scanners didn’t track you; they tracked the packages. There were packages being stolen from porches; the scanners were supposed to help, to let the customer know their package had been delivered. Then, they put a GPS in the scanner, so they can pinpoint you at
any given time. If you spend more than a few minutes in one area, an email to the manager is
sent.”
That led to a more stressful work situation. Jones continued, “You can’t tell me how
long to spend in the bathroom. We get two breaks and a half hour lunch, but most of us snack
in the truck on the way. We often don’t get a chance to eat because of the extra time it takes
with the weather conditions.”
There was a bright side to that, however. “I was kind of glad; I dropped 14 pounds, and I was

really happy!” she said. “Then you’re too tired to eat when you get home. You start at 6:30 in the morning, and you get home at 8:00 at night. When I would get home from work, I would be exhausted. I would just take a shower and go to bed.”
Would Jones recommend this job to someone? “I would, for the experience, so they can understand what we go through on a daily basis. What I would like for them to do would be to change it. Management wants you to put in more for less; I want them to improve the process. The sidewalk is really damaging when you have to walk six to seven hours a day. It’s painful. You’re damaging ligaments and tendons over the years. They need to cut back a little. With the new program they’re coming up with, they will, because they can’t keep the carriers out in the field that long, it’s just too painful. Hip joints, knee joints, ankles…all you need is one acorn, which are everywhere in Ferndale, to turn your ankle.” She continued, “I need for them to improve the service. The way the training is, it’s too much for them to absorb at one time.

They wanted to train carriers in 3 days, that’s impossible. It’s at two weeks now. Give them time to learn the job. That would be beneficial for everyone.”
Jones will miss her coworkers. On her last day, a bunch of her coworkers drove up in trucks along her route, and took parts of her route to make her last day easier, and try to finish earlier.
“We support each other,” Jones said. She still was there until 8:00p.m., removing her belongings and enjoying a celebration in the office. “It was a long day, but it was well worth it.” In retirement, Jones is looking forward to spending more time with her two young grandchildren. When she was working, it was difficult to see them due to her long hours.
Recently, her daughter-in- law shared that Jones’ five year-old grandson remarked to relatives that his grandma works all the time. She has not even had much time to get to know her new two month old granddaughter, but that will all change now. She plans to get on the floor and play with them, enjoying every moment. Even at her retirement celebration, she spent more time just looking at her grandchildren than talking with her coworkers. As she moves into the next stage of her life, Jones said, “I miss my coworkers, I miss my people on the route. They were so kind and giving, I will miss them. But Ferndale has GREAT yard sales, and I will be back!” 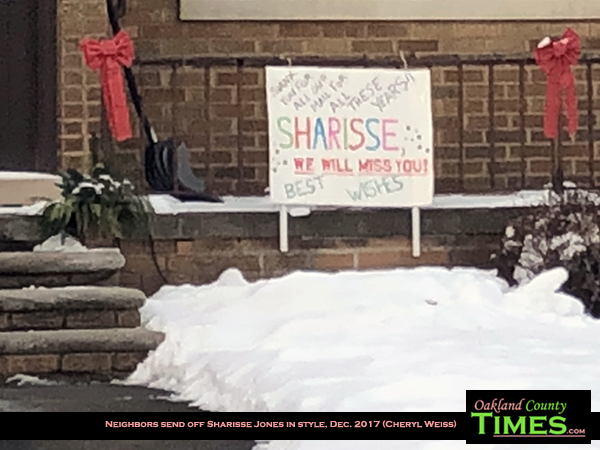 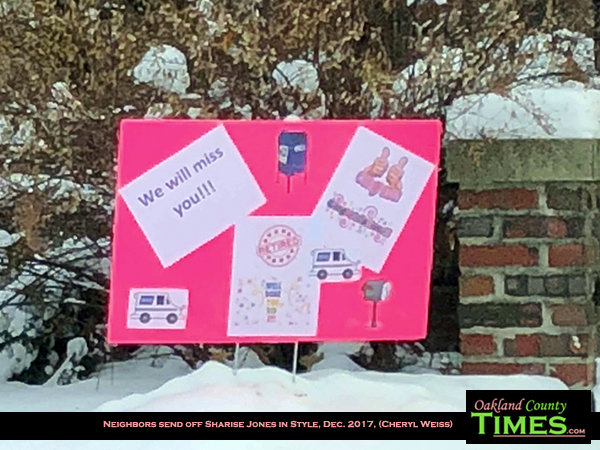 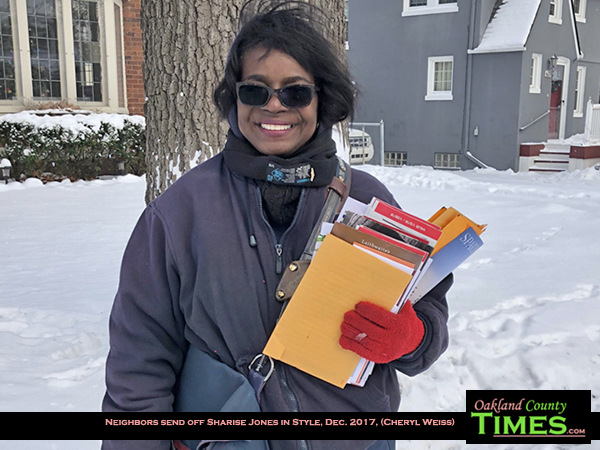 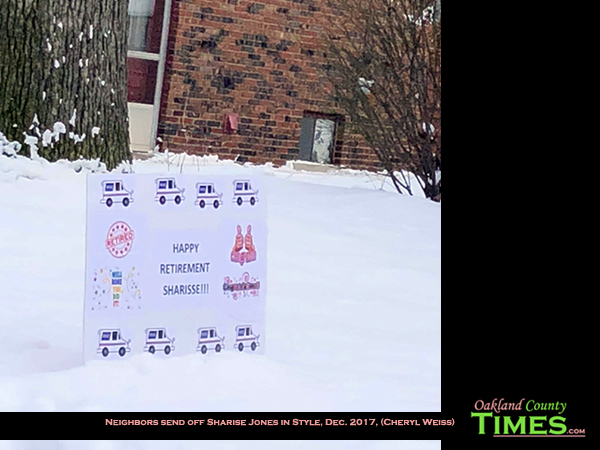 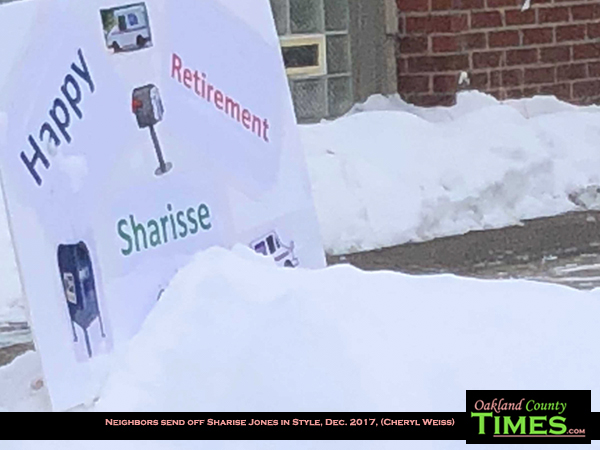 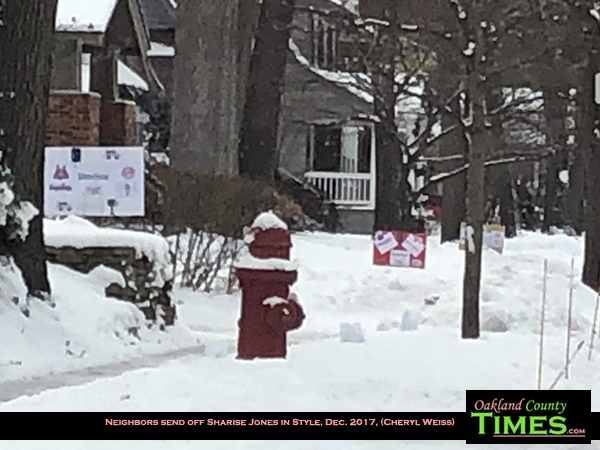 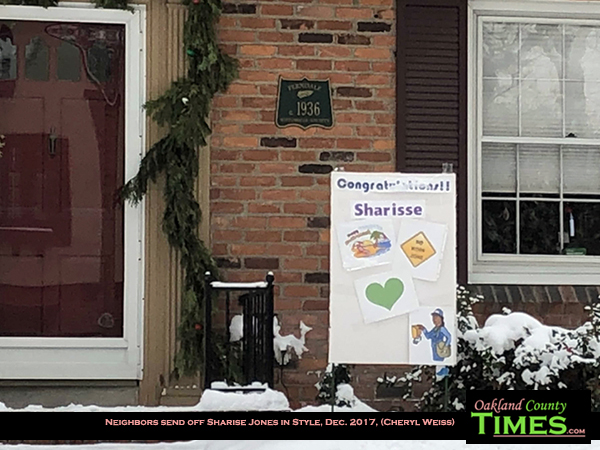