The cats were originally thought to have perished in the fire, but the couple that owns the home has reason to be hopeful.  As they sift through the ashes and rubble of their home, no remains have been found.  And there have been reports of sightings around town.

Two of the cats were recently awarded with Guinness World Records. A Maine Coon named

The neighborhood of the home is between I-696 and 11 Miles and Farmington Road and Drake.

A family member posted on behalf of owner Will Powers on Facebook, stating “Cats are still missing after house fire but sighted repeatedly in Farmington Hills. $25000 reward (payable in Bitcoin) for information/photos that leads to the capture of any one of the 4 cats.

“DO NOT CHASE. PHOTOGRAPH AND CALL.

“The demolition and clearing of the house is proceeding. Today, the only room Will wasn’t able to search fully on the 1st floor during the fire, the cat room, was fully excavated. All debris

was sifted through fully, and no cat remains or evidence of them whatsoever were found. This does mean that the cats were very likely to have been in the basement at the time of the fire, and had a wide open back door to run out when things got smoky. Being as the fire was upstairs and the basement door was an inwards draft, this kept fresh air in the basement for 30-60 minutes while the house burned.

“There is an extremely good chance that at least one if not all of the cats escaped.

“Sirius, Arcturus and Cygnus have all been sighted lately, but no sightings of Yuki who lived on the second floor. Nobody has managed a photo of them.

“Arcturus has been sighted 3 times in the same neighborhood. The boys are out there, and we need to find them before they freeze! They are indoor cats and not prepared for the winter

“Sightings have been all over, Pleasant valley, Hidden valley, Quaker valley, the golf course, North Livonia, 11 mile and power road,696 from 275 exit, many many places all in the woodsy areas of Farmington and Farmington Hills.” 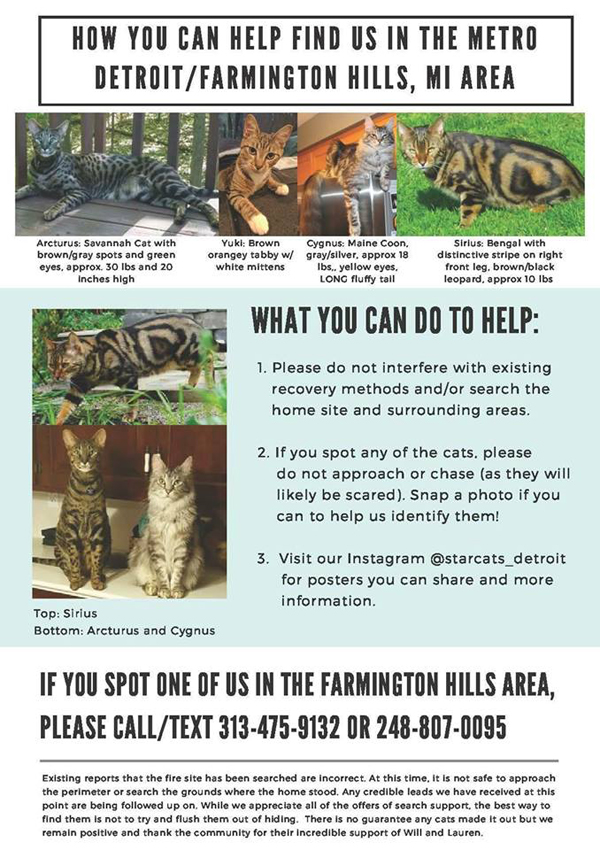