Money to Help Downtowns in Texas

Ferndale, MI – When hurricane Harvey hit Texas at the end of August, it devastated not only neighborhoods and cities, but also the small downtowns where mom and pop shops have challenges even when the sun is shining and the streets are dry.

Fundraising efforts sprung up all over the county, including in Ferndale where the Downtown Development Authority decided to raise money to specifically help out other downtowns.  “Ferndale is a town where the heart beats for helping and supporting our neighbors so it should be no surprise that when similar Main Street communities were dealt a bad poker hand by Mother Nature that our good-hearted business community rallied to help them get

their chips back on the table,” said DDA Chair Dean Bach, owner of Dino’s Lounge.

On Sept. 9, 26 Downtown Ferndale businesses donated a percentage of sales to the relief effort.  Among the businesses are Among the businesses were 3Winks, The Candle Wick Shoppe, Dino’s Lounge, Go Comedy Improv Theatre, How’s Bayou Modern Natural Baby and Revel Bar at the Rust Belt Market.  Several other businesses such as Painting with a Twist and Bosco held their own events independent of the DDA day.

“We didn’t want to just collect money and dictate what it would be for, we wanted to really find out what the downtowns needed,” Wilcock said.  “They know what they need better than we do. We just wanted to see what they needed and find a way to make it happen.”

In LaGrange, the local Rotary Club had been paying utility bills for residents.  With money raised in Ferndale they were able to expand their donations to pay bills for small businesses that were shut down by the storm.

And in Cuero the effort went to help with event programming.  “They wanted to do something to boost morale and bring the community together, to give people something to celebrate,” Wilcock said.  “They have a dog event similar to our Fido Does Ferndale so that worked out perfectly.  They sent us pictures and they look so much like what we do – all the happy people and happy dogs. Those kind of events make a difference, especially when you’ve been through such a big tragedy.”  The funding will also help with holiday programming for the Downtown, which is still recovering.

Getting to know the communities has also been an unexpected reward for Wilcock and the business owners.

LaGrange is located on the Colorado River between Houston and Austin and is about a quarter the population of Ferndale.  Its claim to fame is being the setting for The Best Little Whorehouse in Texas, and it was the subject of ZZ Top’s 1973 song “La Grange.”  Country singer Gabbie Nolen also came from the small town.

Stacey Norris is the City of La Grange Main Street and Tourism Manager.  “A great big Thank You to Downtown Ferndale for raising nearly $5,000 to help with Hurricane Harvey Relief efforts,” she said. “This will go a long way to help many of our businesses and residents that were affected.”

Cuero is the unofficial “turkey capital of the world,” and their high school mascot being The Gobbler.  Their population is just shy of 7,000.  Their City’s website is still packed with hurricane resources as they continue to rebuild.

Sandra Tague Osman, Main Street Manager, City of Cuero said “On behalf of Cuero Main Street, we appreciate and will not forget the kindness and generosity of Downtown Ferndale Michigan, towards your now forever friends in the City of Cuero, during our time of need. If you find yourselves heading this way at any time, Cuero would be happy to show you a special Texas time.”

The efforts in Ferndale were memorable as well.  Dino’s Lounge was closed for remodeling at the time, but hosted a pop up bbq party on the back patio.  At Howe’s Bayou they raffled off a

“Every single person we approached bought a ticket,” said Howe’s Bayou owner Michael Hennes.  “It was an opportunity to do something as a community that would have a immediate impact on another city in need and we went for it. It makes me proud to work in a city where a single phone call can activate a community into action. And not just the business community but our customers as well.”

It didn’t just help the Texans either.  With 26 businesses rallying for a cause, Ferndalians felt the love.

“Ferndale’s efforts in coming together for other communities who could use a boost, also helps boosts us by bringing us together for a common cause,” Bach said.   “As this city grows, coming together with and for each other will prove important in keeping the special spirit of Ferndale as we move forward.” 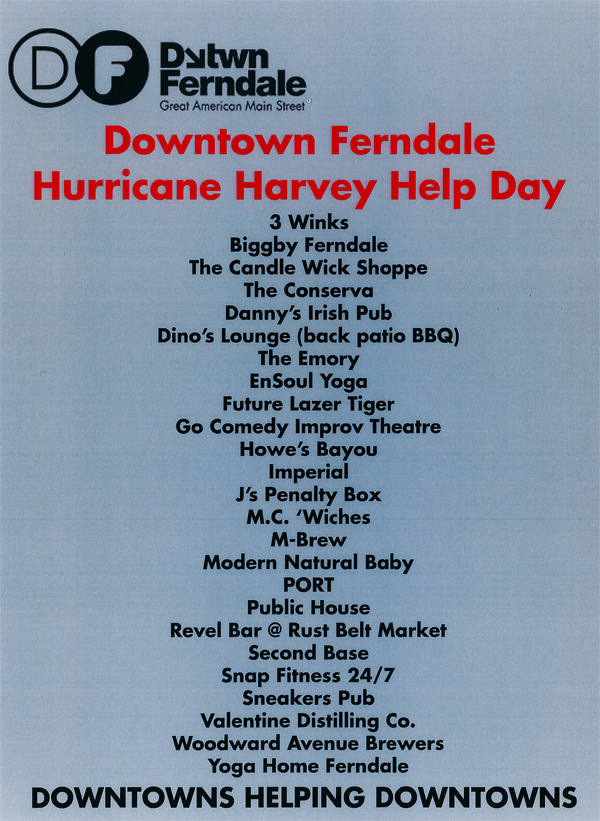