The Oak Park Boo Bash was the place to be on Halloween, as an estimated 6,500 guests packed the Community Center to enjoy a free evening of fun. The line of costumed kids and parents stretched around the corner of the Community Center toward the library shortly after the Boo Bash started at 5:00 p.m., and the line continued to grow until the event ended at 8:00p.m.  The line moved quickly, however, and soon excited trick-or-treaters entered the dimly lit room filled with mechanical inflatables beckoning them to approach.  Some kids grinned, and posed for selfies; others screamed in terror and hid behind Mom and Dad until they moved past the scary creatures.  The inflatables included a black cat and a huge insect,

both with eerily glowing eyes, and a happy jack- o’-lantern with a witch’s hat.

As the guests moved into the hallway, they were greeted with a variety of costumed characters.  At one spot, a jailed gorilla pushed against the bars, trying to break out and occasionally roaring at the crowd.  Below the bars, a red sign warned, “BEWARE”.  One little girl, dressed as “Elsa” from Frozen, ran into her mom’s arms to be held until they passed the gorilla.  Other kids laughed and high-fived the gorilla as they passed.  An alien and other characters welcomed guests to the Boo Bash throughout the corridor.

Just before reaching Trick-or-Treat Street, visitors had to pass through the spider area.  Huge spiders dangled from the ceiling and clung to the walls, highlighted by spooky purple lights.  Kids looked up with a mix of discomfort and delight, and adults took pictures as they walked through the dark passage.

Trick-or-Treat Street was the area the kids had been waiting for.  Numerous tables were set up

with pounds of candy and other treats donated by local businesses and community organizations.  Costumed adults and teens greeted trick-or-treaters with smiles and compliments on the creative costumes.   Kimika Fowler’s children, Kyla and Teagan, ages seven and two, were afraid of some of the inflatables, but they cheered right up as they started trick-or-treating!  Candy was given to them, as well as other treats, lots of smiles, and wishes of “Happy Halloween!”

Raj Fluker brought her little one, Deraj Tigner, age 6, to spend part of Halloween night at the Boo Bash.  Tigner looked around the room with wide eyes and said, “They have some great stuff here!”  Fluker shared that she comes to Boo Bash because it’s a great place to bring the kids as it’s a family-oriented, safe environment for Halloween fun.

Regina Weiss of the Tri-Community Coalition was at a table, handing out treats with three teen volunteers.  According to Weiss, they handed out pencil sharpeners and pencils with positive messages.  The most positive messages, however, came from the teens joining her at

the table.  Binta Sal is 15 and a student at the Oak Park Freshman Institute (OPFI).  She took a moment away from handing out treats to say, “I want to do this next year!  It is fun to see the kids with different costumes, it’s very fun!  It reminds me of when I was a kid.”  She grinned and added, “I love to see the kids’ faces when they receive things.” Britteney Graham, another OPFI student agreed.  “I like to give stuff to people, I like to see kids dressed up,” she said.  Graham plans to volunteer at the Boo Bash again next year.  “Yes, it’s really fun!” she exclaimed.  In addition to having a great time seeing kids in costumes, and the great feeling that comes from helping others, the teens receive community service credit for their time at the event.

Although kids love candy and trick-or-treating, there were other treats in store for the thousands of guests that attended the Boo Bash.  Gordon Russ’ Spooky Monster Magic Show entertained the crowd early in the evening, and the DJ provided entertainment all evening long, inspiring costumed kids and adults to sing and dance along to the music. If anyone

wanted a snack, cider and donuts were available as well.  Everything at the Boo Bash was free.

It was a magical night.  A little witch adorably missing a couple front teeth, an alien, a rabbit, and a little Dracula laughed with delight as they surveyed the room.  A volunteer in a chicken costume inspired some to do the “Chicken Dance.  A little girl in a purple butterfly costume waited patiently yet excitedly for the line to move to the next stop on Trick or Treat Street. A toddler in an Incredible Hulk costume walked in with his mouth open, looking around at all the sights.  And for a little bunny in a baby carrier, it was her first Halloween.  She was asleep when she entered the Boo Bash, but soon woke up and smiled as she spotted bright lights and people everywhere.

Kelli Clark brought her granddaughter, four year old Leaira Nicole Clark.  Leaira said the best thing about the Boo Bash is the pumpkins everywhere!  Clark stated, “There are so many great

things going on!  I know this is a nice place to be on Halloween.  It’s kid-oriented and safe.”

Three Oak Park Public Safety Officers attended the event, “standing by,” Officer Anderson stated.  He went on to say, “We haven’t had any problems; everyone’s enjoying themselves and having a good time.”

Bennie White, Cable/Video Coordinator for the City of Oak Park, said “I’m having a great time!  There’s diversity, this place is full of nice people, everyone is generous… I couldn’t ask for better than this.”

Diane Spiller, member of the Oak Park Recreation Advisory Board, said that this year was better than last year. According to Spiller, this year it seemed even more organized, and more people attended the event.

Halloween in Oak Park has always been a special evening full of fun, friends, family, and neighbors.  The Boo Bash brought even more fun and entertainment for the whole family to the community, and provided an evening full of memories for all guests to treasure. 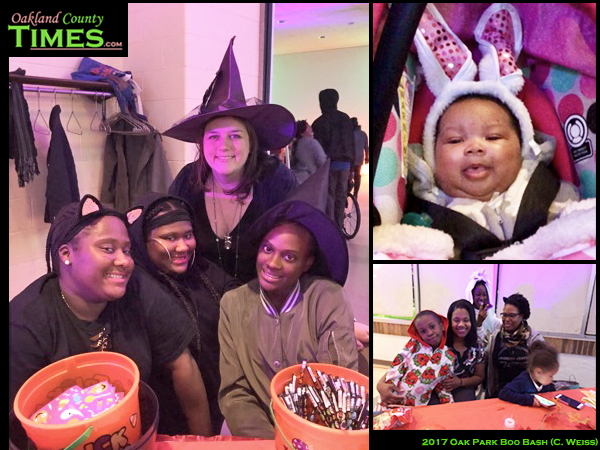 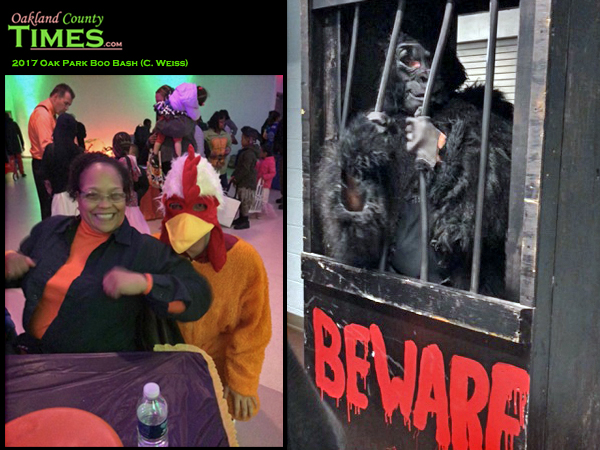 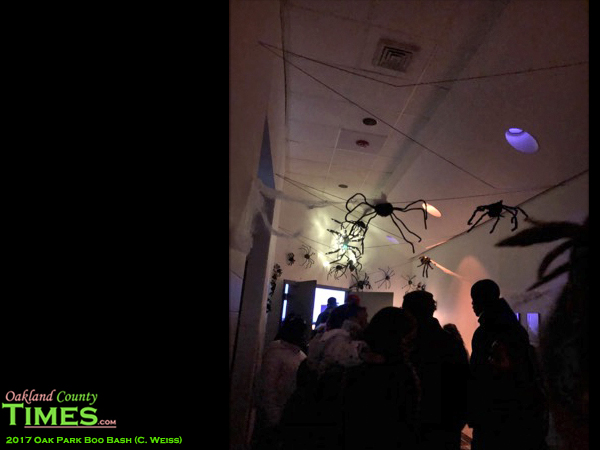 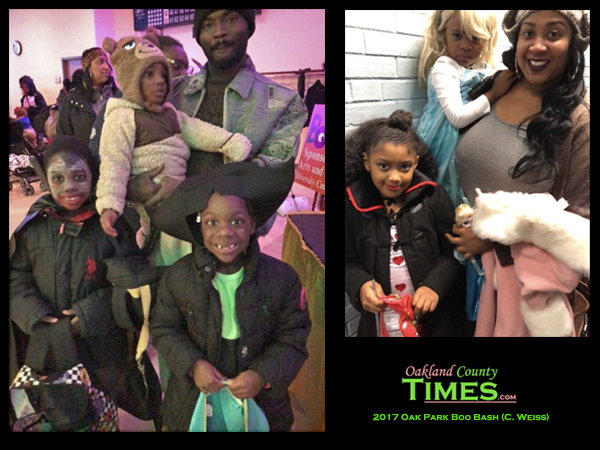 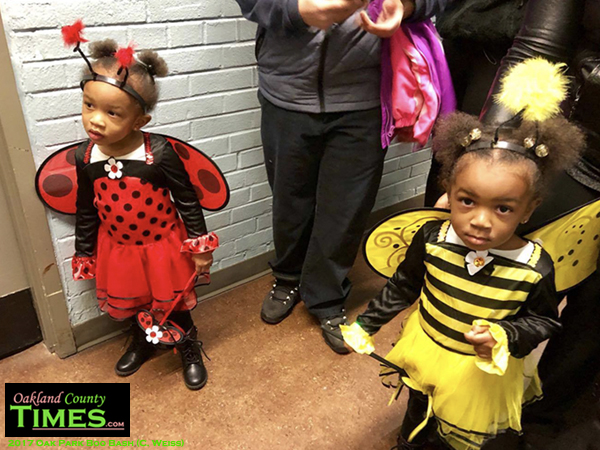 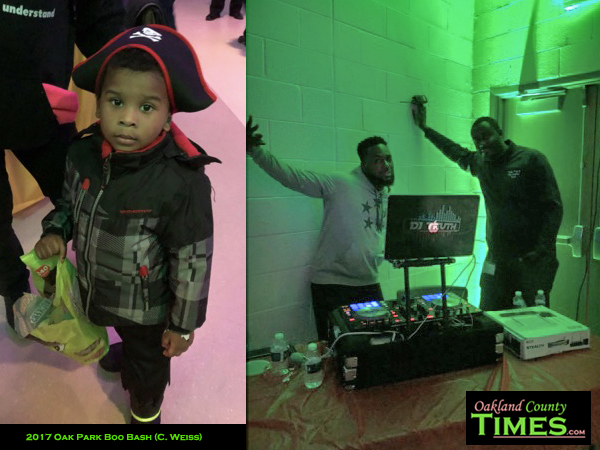 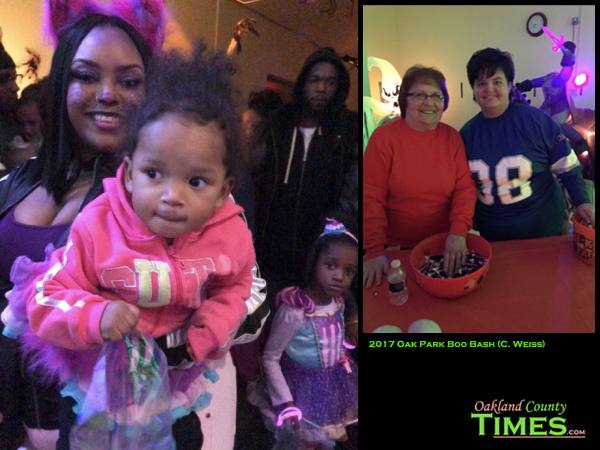