with Installment of Rainbow Flag in Council Chambers

“At that time Ferndale was already a warm, welcoming community and it was known as a place that was very gay-friendly.  I bought my house here for that reason and I have been able to benefit from a lot of the hard work and sacrifices of the people that came before me,”

That history of community activism and the years of love and inclusivity that Ferndale is now known for came together Monday night as the city installed a permanent rainbow flag in the council chambers.  The flag joins the American Flag, the POW/MIA Flag, the Michigan Flag, the Oakland County Flag, and the Ferndale Flag in the place of honor on stage where official City business gets done.

“I’m honored that I have that ability to be part of this.  Regardless of being on council or not, I’m proud that my community recognizes the importance of treating everybody with dignity and respect,” Pawlica said.

The brief ceremony honored some key players in the history of inclusivity in Ferndale, with Mayor Dave Coulter noting that there have been many people involved over the years and selecting a few for the visual timeline was not an easy task.

Jan Stevenson joined Coulter on stage first. She moved to Ferndale in 1988, at a time when the LGBT community had been established there, but was still a point of contention.  The community had grown in the 1970s and 1980s because of increased crime in Palmer Park in Detroit, and they sought more police protection.  Yet LGBT people still faced discrimination, hate and harassment.

“About a year after I moved to Ferndale, we started, a really dedicated group of volunteers, started Affirmations,” Stevenson said.  Affirmations is an LGBT community center that has grown from a room in an office building to a thriving community center across the street. The first service had been a helpline, followed closely by youth programming.

“I remember the first time I came to a Ferndale City Council meeting.  It was probably in 1991 and there were a few of us coming to ask the City Council if they’d be willing to think about maybe possibly thinking about, maybe not tonight, but if they would consider, an

ordinance to protect LGBT, well at that point just gay, people in Ferndale. And we were shot down unceremoniously by the people on the City Council and they made it very clear they did not want us not only on the City Council but they would really like us to just leave the city all together.  How things have changed!”

Ann Heler was also called up.  She and other residents had created FANS –  Friends and Neighbors of Ferndale, a group that began as a social connection but soon moved to tackling the problem of hate crimes against the LGBT community.  Once programs were instituted with the Police, FANS went on to fight for a human rights ordinance which passed after three attempts.

In addition to the activism, celebration and demonstration of LGBT pride has been a key

part of gaining social acceptance and bringing people together.  Michael Lary, who currently is the City’s Special Events Director, was among the early volunteers of Pride Fest, an event that began in Royal Oak, then moved to Ferndale for several years while it grew into Motor City Pride. The event got so big that it now takes place each year at Hart Plaza in Downtown Detroit, yet its memory still lives on as a spin-off event was created called Ferndale Pride.

Julia Music is the current Director for Ferndale Pride. The event started in 2011 and continues to be a massive demonstration of love and diversity in the community. Former Mayor Covey, Music, Pawlica and Monica Mills were all recognized for being among the first organizers.

The presentation included the placement of the rainbow flag by a young lady that Coulter called “the future” of activism in the community, Madeleine LeBlanc.  She is a sophomore at

Ferndale High School and the head of the Gay-Straight Alliance.

The rainbow flag is just part of a tradition of inclusion.  “Just this year we adopted a Welcoming Cities ordinance to make Ferndale a safe place for immigrants.  We publicly spoke out against the Federal suspension of DACA and two years ago I became the first Mayor in Michigan to perform legally recognized same sex marriages.  Together we have made history.  From Affirmations and commitment ceremonies to Pride Fest and Human Rights Ordinances, every step we’ve taken together has helped move Ferndale forward,” Mayor Coulter said.  “This flag represents more than just LGBT rights.  The rainbow of red, orange, yellow, green, blue and purple represents life, healing, sunlight, nature, art and spirit stand as vibrant symbols of hope for our entire community.”

The City also has added the Ferndale logo and name to the wall of Council Chambers. 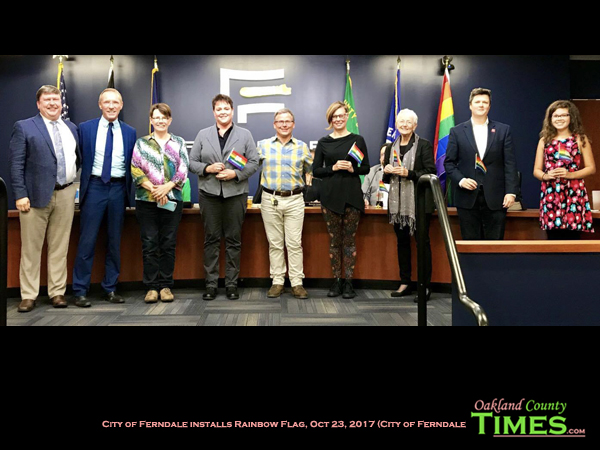