Hazel Park, MI – “All these cities have opted out, where do you think people are going to go? They’re going to come to Hazel Park,” said City Attorney Janet Drumm spoke to a packed city hall Tuesday night for a joint meeting of the City Council and Planning Commission to discuss potential zoning requirements for medical marijuana related businesses.  In September, the City voted to opt in to state laws that allow for various types of facilities and now is working through the details of how this will come to fruition.

The basic questions are being asked.  Where will the businesses go? How will the facilities

look?  What signage will be used? How will odors be kept to a minimum?  How will parking requirements be determined? etc.

A sample ordinance was shared with the attendees.  “This is a draft document. This is not even a proposal, this is a starting point for discussion,” stressed City Manager Ed Kloucher.

The goal is to have a functioning ordinance in place by Dec. 15, the date medical marijuana businesses may begin applying for state approval.  The challenge for municipalities like Hazel Park is that the State of Michigan Department of Licensing and Regulatory Affairs (LARA) is still working through the details of implementing the Michigan Medical Marijuana Act as well.

“This is going to be changing over the next couple years while the state gets it refined,” said Mayor Pro Tem Mike Webb.

Hazel Park set a limit on the number of medical marijuana related businesses.  There are five

types of businesses allowed by the State, and Hazel Park will allow up to three of each:  growers, manufacturers (processors), distributors (provisioning centers/dispensaries), transportation and testing facilities.

Drumm and City officials have been attending meetings and touring facilities to learn more about these types of businesses.  Though no provisions have been voted upon, several points were expressed by those at the meeting that are likely to end up in the proposed zoning ordinances, including:

-No drive through dispensaries

-Signage cannot include “marijuana,” “pot” or other indicia of the product

-No “bright green” signage or paint, no green cross, no neon signage, no window advertising

-Name will have to be approved by the city

-No vehicles with advertising on them

-Landscaping must be irrigated

-Lighting must be ornamental

-Bay doors are required by state law, so all transfers of product will be done inside a secure building

-Sprinklers will be required

-Licenses would be up for review annually

The issue of signage was thoroughly discussed.  “I’m not a fan of what happened on 8 Mile,” Klobucher said.  “We want to make it as pretty innocuous as we can…  Nobody would know walking past to get ice cream with their children that there’s a marijuana facility.”

The audience was full of attorneys and potential business owners with an interest in the City’s decisions, many sharing input as well as asking and answering questions.

“The key here is common sense and entertaining good proposals from reputable businesses,” Klobucher said.  Staff will take the discussion Tuesday under advisement and create a proposed ordinance that is likely to be voted on before December. 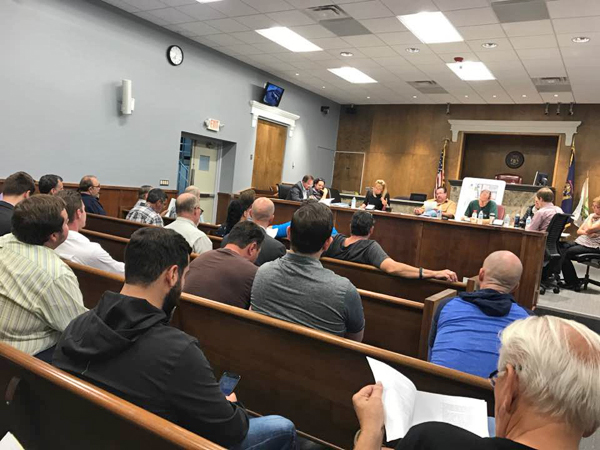