Ferndale, MI – The cat is out of the bag and a Ferndale couple could not be more proud that not one, but two, of their beloved pets have officially broken world records.

Lauren and Will Powers first met because of their love of kitties.  Both are also doctors.  After long days of helping people be healthier, they come home to the beautiful faces of Cygnus and Arcturus.

30 lb Savannah cat that even at just two years old is a record-breaking 19.05 inches, making him the tallest ever.

Cygnus is a silver Main Coon cat whose claim to Guinness record fame is his amazing and fluffy tail. it is 17.58 inches long.

“These records have stood for a very long time and each cat broke their record at only slightly over 1 year old. Since that time they have continued to grow and their height/tail length is far more than it was when we first measured them,” Will said.  “They still aren’t even full grown now. If the records ever get challenged we will re-measure them and take them back! They are now vastly beyond their original records and continue to grow even more!”

Will gave credit to the breeders, and to the fact that the cats have been raised with diets designed for growth.  “Arcturus is an F2B Savannah cat bred by Stacee Dallas of Starfell Savannahs in Traverse City MI (He’s the Son of Myst and Dream). Cygnus is a Maine Coon bred by Katherine Greenman of Wildchild Maine Coons in Jackson MI,” he said. ” Despite the popular method of the, “Organic/Raw/All-Natural” diet recommended nowadays, our boys were raised on GMO-ridden, synthetic, chemical based diets that I designed for them to eat since kittenhood. I admit this because natural is not always better. We’re super pro-science people. Both Lauren and I are doctors, and biochemistry, healthy eating, a

nd real hardcore evidence-based science is in our blood.

“I literally cooked chicken for days in a slow cooker until it was totally degenerated to individual strands of myofibrils. These easily digested chicken shreds were mixed with a mineral/vitamin powder I made, along with purified calcium and phosphorus, long chain fatty acids, carotene, ect ect. I also obtained purified synthetic Levo-taurine, Levo-lysine, and other amino acids essential to cats which were then added to the mix. This cocktail tastes truly terrible, and so it was ground into plain old delicious Meow Mix or Friskies wet food for flavoring. In addition, Royal Canin kitten food was fed to them continuously from kittenhood until today with 24/7 availability. They have never known hunger, but they prefer their wet food science experiment to dry food. This dry kibble was chosen as it has the highest protein to carb ratio of all the dry options.”

The other thing the cats have had since kittenhood is a whole bunch of love. The couple enjoys

taking their felines for walks around Ferndale, and even to festivals like Ferndale Pride.

“Its always a pleasure when I see people get super excited about them. Even more so when it gets them interested in our cat shelter and willing to help out or donate. Arcturus and Cygnus are extremely privileged and spoiled cats, but that isn’t the case for many of the cats of Detroit. They were bred to be loved, and so I feel its important they give back some karma to the

universe for all the cats who weren’t.”
There is also a third kitty in the house. And while Sirius doesn’t hold any world records, he still holds a place in Lauren and Will’s hearts. Sirus is a rescue cat that Will has had for over ten years.
Check out the record-breaking page on Guinness World Records website.
Suggested:
15 Adorable Pictures from Ferndale Cat Shelter
CLARIFICATION/UPDATE: The couple in this story lived in Ferndale at the time of breaking the record, and consider themselves Ferndalians at heart, though they have since moved to Farmington Hills. 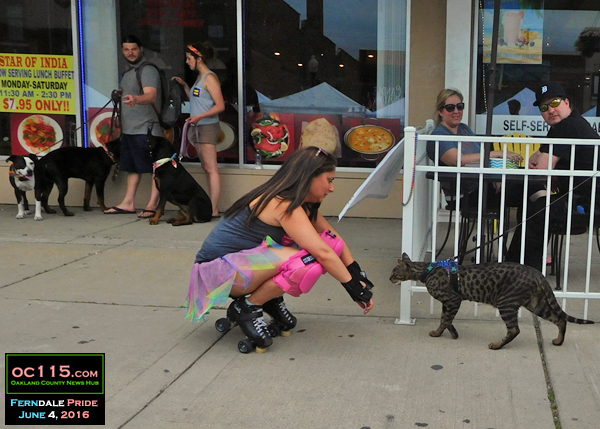