Pickup Goes Over Rail, Catches Fire on I-75

Pickup Goes Over Rail, Catches Fire on I-75

Auburn Hills, MI – On August 10, 2017, at approximately 7:30 a.m. the Auburn Hills Police and Fire Departments responded to north bound I-75 between South Boulevard and M-59 for a vehicle crash.

A pick-up truck pulling a landscaping dump trailer traveling on northbound I-75 lost control struck the temporary construction median barrier. The pick-up truck went over the median wall onto the northbound I-75. As a result of the crash the pick-up truck’s fuel tank ruptured and a fire ignited. The truck also had an auxiliary fuel tank in the bed of truck that ruptured spilling approximately 30 gallons of diesel fuel on both north and south bound and I-75. The driver of the pick-up sustained a minor injury and refused medical transport.
The Auburn Hills Fire Department extinguished the fire and assisted with migration of the fuel spill. North and south bound I-75 was closed for a period of time and partially re-opened at 9:45 a.m. Dan’s Excavating, the construction company on working on I-75 project and Michigan Department transportation assisted with the roadway clean-up and re-opening the roadway.
The City of Troy Police and Fire Departments and Bloomfield Township Police Department also responded to the scene. 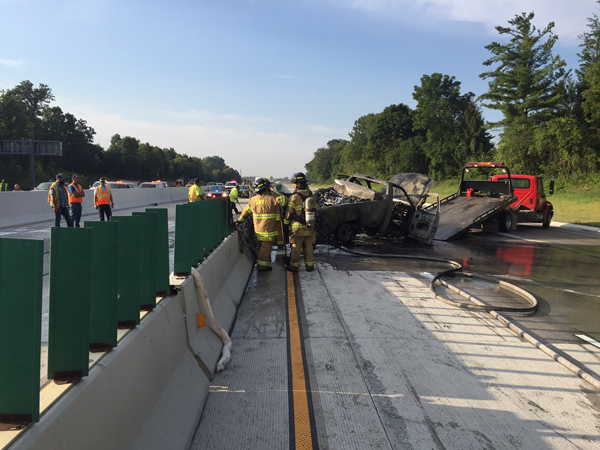 OC Restaurant QUEST: Our Reviews in Troy So Far…
November 19, 2022
Search Our Site