Ferndale, MI –  Plans are in the design phase for a parking deck in Downtown Ferndale, but petitioners spreading false information could undermine the project.

The plan is to build a 4 story mixed use structure that would take the West Troy Street Parking Lot (Lot 6) from 180 spots to 390 while also adding office, residential and retail space.  The mixed use portion of the project would help bring in the revenue needed to pay for the deck. The structure would be designed in a way that it could be added onto later if future parking needs arise.  The City is also developing designs for a single-use parking deck to give the

Although the project would be paid for from the Auto Parking Fund through parking revenue and leases of the mixed-use space, the funding would be acquired through a bond of up to $20 million through a Capital Improvement Bond.

Ferndale resident Clinton Hubbell, who is an attorney, prepared the petition which states “This Petition requests that the question of whether the City of Ferndale should issue up to Twenty Million Dollars in Capital Improvement Bonds for the purpose of financing construction of a multi-use development at West Troy Street at Allen Road  should be put to a city-wide vote.”

information in order to get signatures.

This includes a pair of petitioners on Woodward Ave Saturday who misrepresented the petition to this reporter as a way to gain parking in Downtown Ferndale. The sheet being used to collect signatures did not have any information on it about what was being signed. After being told they were speaking to a reporter they continued to answer questions, with one stating that the petition was in favor of building a deck and the other stating that it is not really for or against but to give the public a chance to vote if they wanted a plain parking deck or a mixed use one.

When questioned about the accuracy of those statements, one of the petitioners said the city was lying to people and that putting it to a vote is the only way for the public let the city know what they want, whether they are in favor of a deck or not.

When asked his name, the petitioner said he didn’t really have anything to do with the petition, he was just trying to make some money getting signatures.

During the discussion, the other petitioner handed over a “fact sheet for canvassers” that she said was “what we are supposed to say.”  That sheet included that “There is significant controversy about this issue.  Residents and businesses close by are very

concerned about the disruption it will cause… There are apprehensions about traffic congestion resulting from the proposed structure…Others object to the six story height of the proposed project.  Some have voiced the possibility that in the future the city could increase our debt to fund or enlarge this project by re-issuing the bond without a vote.”

Ferndale resident Jodi Berger is also circulating the petition.  ” I want more parking for downtown, and to leave the storefronts and housing to the other proposed developments (old Sav- a- lot and across from C.U.One locations). I respect downtown merchants and Troy street nearby residents who prefer parking deck (3 stories) only too. Don’t cram a giant building into a small space, I guess. Just give us more parking that we definitely need. And please don’t let this issue become ugly and divisive,” she said.

Reports of others who had been approached under false pretenses became so rampant that Ferndale DDA Director Barry Hicks released a statement on Facebook, saying “Several businesses have made us aware that canvassers have approached their customers encouraging them to sign petitions about the West Troy Street parking development.  Please know that the City and DDA have no affiliation with these individuals. From what we are hearing, they are communicating information which may not be accurate regarding the parking deck proposal.

‘For the most current and up to date details on the project I encourage you to visit the project website at www.parkferndale.com to review all of the facts and information.”

Mayor Dave Coulter said “These paid canvassers from outside Ferndale are misleading people into signing something that will delay or stop a parking project downtown. I would urge residents not to sign it, and to find out the facts about the reasonable mixed use project that’s been proposed to finally address our obvious parking problem.”

Ferndale Councilperson Dan Martin gave a statement about his experience, saying  “I was personally approached by one of these canvassers Thursday, and while I respect the right of residents to put this on the ballot should they choose (although I am personally not in favor of such action on this issue), the number of lies I heard this individual spread about the project was appalling. When I spoke to him he admitted that he wasn’t local and didn’t know anything about the project so yes, he was lying. I just have no patience for promoting this kind of behavior. It really undermines what business owners are trying to discuss. I’m proud to serve on this Council and our willingness to have an open and honest discussion about this project.”

Hubbell shared details of the petition effort.  “We need about 1600 signatures, which we anticipate gathering by the April 18 deadline.

“The reasons for circulating the petition to put the bond issuance to a vote are pretty straightforward. 1. Give a voice to people whose opinions are not represented on a city council that votes 5-0 for controversial development projects; 2. To have the businesses that these projects affect the most heard; 3. To send a message that it’s not open season on the city issuing bonds for expensive projects as we emerge from the recession, and 4. To put this issue to bed; if the votes are there citywide, then we build the mixed use project, and if not, it dies on the vine. Either way, the petitioners have already won by the city pledging to give an equal ear to different options for the lot 6 site,” Hubbell said.

When asked about the reports of dishonest petition-gatherers, he said “The exact language of

the petition is printed on every signature sheet. I think that there are some folks in the community who feel very strongly about this issue, and they are willing to say things that favor their positions. I prefer to stick to facts.”

However, the signature sheet (pictured below) did not have information printed on it, and the “fact sheet” given to petitioners was inaccurate.

CONSEQUENCES OF THE PETITION

The project is currently in the design phase with architects working out details of the development.  In March City Council instructed staff to move forward with designs and more information on both a mixed-use and a single-use structure so the potential for both could be

explored. The bond money could be used for either design.

Mayor Pro Tem Melanie Piana said “The petition is misguided in that it will slow the process down. If this issue is on the ballot and passes, then we will have wasted time and money supporting a mixed use deck that most people want.  If it goes on the ballot and doesn’t pass. No new parking at the West Troy lot.  Start the clock and process over on another city owned parking lot.”

Candlewick Shop owner Jacki Smith has been heavily involved in discussions about the deck.  “Supporting the Mixed Use Parking Deck is an easy one for me.  Resolving the parking capacity issue back in 2009 when the current Rosie O’Grady’s opened is what got me involved with the DDA.  I am an owner at the Candle Wick Shoppe and see first-hand what happens to

my business when my customers can’t park.  We have had to change our business model to work around the parking issue, changing our focus to web sales to survive,” she said.

“Being a board member of the DDA, I am watching the DDA and the City create a communication plan and business disruption plan to help minimize the impact during construction.   I encourage anyone with questions visit http://parkferndale.com/.  There is a lot of misinformation floating around including that the tax payers will shoulder all cost for this deck.  The plan and data I have read shows how the parking deck is paid through the parking fund and the increase expected from that fund. I am excited about what the future will bring and fully support this development.”

HOW TO SHOW SUPPORT OR OPPOSITION TO THE PROJECT

Groups have rallied around both sides of the issue.

Those who want to sign the petition that would put funding on the ballot can do so at Mejishi Martial Arts or The Library Bookstore.  There is also a Facebook Group called Fix Ferndale Parking that opposes the mixed-use plan.

Those who support the mixed-use deck can sign an online petition to “Support the Ferndale Parking Deck”   The online petition was created by resident Matt Helms, who said that the site got 150 signatures in the first day. Their Facebook page is https://www.facebook.com/FerndaleParking/.

Note: This story has been updated to include the quote from Jodi Berger. 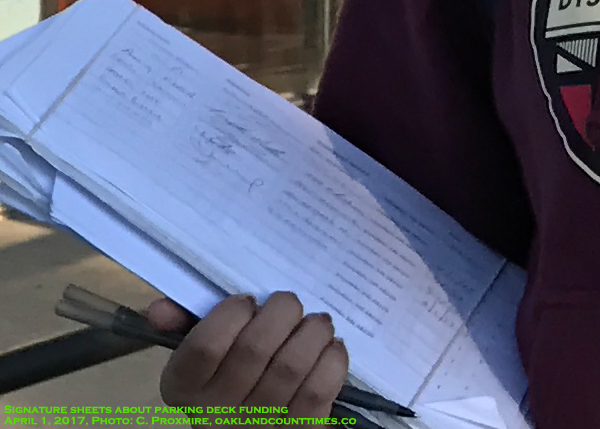