Berkley, MI – In the war against rats, it is easy to want to blame one’s neighbor.  Yet there are things that everybody can do to help reduce the presence of rats in their own yards.

These methods for the focus of the discussion at the Berkeley Public Library last week.

Joe Giannosa of Great Lakes Pest Control spoke with a group of over 50 residents who were concerned about rats in their neighborhoods.

“It’s not always your neighbor that’s a problem. You have to look at your own property, “he said.

Giannosa explained that the most common rat in this area is the Norway rat.  Residents might also encounter mice.  The way to tell the difference, he said is “a mouse has large ears and proportion to their face, a rat has small ears. Think of Mickey Mouse.”  He also said that a mouse tail is longer than their body, but a rats is shorter than their body.

Accessibility to trash and animal waste is a big draw for rats, but they will also indulge in gardens, birdseed and fruit that has fallen from trees.

Giannosa suggested making sure that all garbage cans have tightly fitting lids.  Some cities do not have ordinances that require garbage to be kept in closed containers.  He said that in East Pointe, for example, residents used to put garbage out by the curb in plastic bags.  The bags made it easy for rats to feast.  Requiring closed containers did not eliminate the problem completely, but a greatly reduced it by limiting the supply of food.

“There are two things to look at and controlling rats,” he said. “Food and shelter.”

He said that rats prefer to dig and live in the ground.  They like to burrow under concrete slabs or in a landscape area. Raised flowerbeds are also an ideal habitat, and they are commonly found living underneath decks, porches, and stairs.

It also helps to know that rats usually move in straight lines using walls to run along as their guide.

In the winter people can find their paths easily because of the marks they leave in the snow.

In warmer weather people can look for rat droppings, gnaw marks on things like stairs, siding and landscaping trellises, and holes that may have grease marks around them from the rat’s body.

Rats also multiply quite rapidly. Giannosa said rats have about eight rodents per litter, in

about 8 litters per year with an 8 to 12 month lifespan per animal.

As far as extermination, poison is his method of choice.

He recommended a professional rat abatement for several reasons.  Professional rat control companies will use black boxes in the proper places on the property.  Those boxes allow the rats to get in and eat poison that is secured in place.

If poison is not secured, it can be moved and possibly eaten by dogs, cats, or even kids.

Additionally, Giannosa has faith that the products he chooses will be effective, and less harmful to the environment or to secondary animal exposures then some of the poisons one can buy in stores or online.

One concern about poison is that pets will get a hold of the dead rats and eat them, and that secondary poisoning could occur.

“A dog would have to eat about 10 large rats before the dog gets sick,” he said.  There is conflicting research on the web about the dangers of secondary poisoning from rodenticide.  However, initial poisoning can be prevented by using secured bait stations. And secondary poisoning can be prevented by disposing of deceased rats as they are found, monitoring pet behaviors, and reducing infestation on one’s property.

Professional rat control companies also will switch up their products to avoid the potential for the rodents building up immunity to the products that they use.

Another thing to keep in mind, is that rats might not take the bait at all.

“Rats are cautious. It may take 3 to 5 days for the rats to feel comfortable with the box. If there is a restaurant or a space nearby, they may never take the bait. Why have hamburger when you can have steak?”

Giannosa also talked about the need for cities to have strong code enforcement, and to work with residence and restaurants on ways to reduce rat harborages and feeding locations.

Berkley City Council person Steve Baker was one of several city leaders who attended the discussion. “There are things we can do, and things we can’t do, in regard to code enforcement,” Baker said. “We can do tickets, but at the end of the day it’s about communications.”

Baker said that city staff is reviewing ordinances and exploring ways to address the rat issue. Giannosa noted that rats are not just a problem in Berkeley, that every city in the metro Detroit area has this as an issue.

“Residents can all the city if there are properties that have issues,” he said.

Check out the City of Berkley’s “The Fight Against Rodents” at http://www.berkleymich.org/documents/FightAgainstRats.pdf

Check out rat control efforts in: 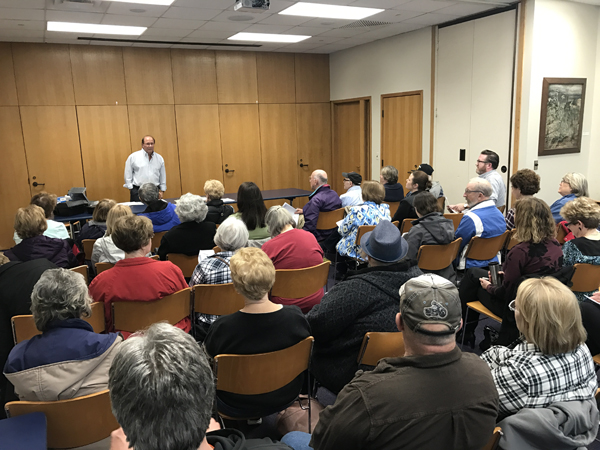