MML#4 – Wireless Antennas and Poles in Public Rights of Way

and Poles in Public Rights of Way

Lansing, MI – With expanding needs for wireless services comes expanded need for the infrastructure to support it.  Smart phones, smart cars, wireless devices etc. only work if there are towers and supporting antennas to give them data access.

But what does this mean for local governments and the residents they serve?

This was the topic of a session at the recent Michigan Municipal League Capital Conference held in Lansing. Attorneys Jeff Sluggett of Bloom Sluggett Morgan and Mike Watze of Kirch Drutchas, Wagner, Valitutti and Sherbrook shared their experiences in helping cities navigate

the challenges of the increasing demand for access to space for poles and antennas.

The main issues for cities, townships and villages is figuring out how to work with the companies that want to use public right of ways for their poles.  This includes determining where the poles will go, what rights the municipalities have in regulating them, how many a community will have, what liabilities there could be, and what compensation they should expect.

Wireless companies have been going to cities with the argument that they should have free and unlimited access to public rights of way because they are a utility.

The attorneys have been fighting this from several angles.

1 – Wireless providers are not a utility.  They must get permission and work with cities.

2 – Cities have the right to license and regulate placement.

3- Cities have the right to be compensated.

“Is wireless a utility?” Watza asked.  The answer is debatable.  MCL 460.111(c) could be used in telcom’s favor, because it states “”Public utility” means a steam, heat, electric, power, gas, water, wastewater, telecommunications, telegraph, communications, pipeline, or gas producing company regulated by the commission, whether private, corporate, or cooperative, except a municipally owned utility.”  However, wireless telecommunications (telcom) companies are not regulated the same as traditional telephone companies. Some do not even offer phone services, only wireless. So there is a gray area if they qualify.

MCL 484.2107(ff) outlines the rights and responsibilities of service providers, provisions of which are being argued out in court cases and in discussions that happen quickly when

companies come to town to build.

According to the Michigan Public Service Commission website, “On March 14, 2002 three bills were signed into law to stimulate the availability of affordable high-speed Internet connections. Act 48 of the Public Acts of 2002 creates a body called the Metropolitan Extension Telecommunication Rights-of-Way Oversight (METRO) Authority, whose purpose is to assist telecommunication providers cut through red tape and obtain permits without having to pay excessive fees or endure unnecessary delays.”

One issue up for debate is if companies approaching cities are actual providers.  Often this is not the case.  Sluggett and Watza spoke of wireless tower builder Mobilitie who is quickly growing their infrastructure across Michigan.

“Who are you dealing with?” Watza said. “These are real estate developers trying to gobble up real estate to sell under contract, either now or in the future, to Verizon, Sprint, AT&T etc….

They are not providers.”

While Mobilite has relationships with the established providers, they themselves are a middleman and the potential for other middlemen to pop up is likely.  The question becomes if municipalities must allow all companies to build poles that want to.

The presenters said Mobilitie has been going into communities claiming a right to build without having to offer compensation to the cities, citing the Metro Act.  However, Sluggett said, “The Metro Act expressly excludes those things.”  He explained that companies are allowed to build underground infrastructure, but not poles.  Wireless technology, however, requires above-ground signals.

The attorneys argued that cities need to set precedents for requiring licensing and compensation, and that they need to be aware of what they are approving.

People are familiar with wireless towers, however they may not be as familiar with DAS (Distributed Antenna Systems).  When companies build wireless systems, they put up a main tower, which is expected, but also they may include DAS in their plans.  “Instead of building big towers they want to build out at the street level,” Sluggett said.  “It takes 8 small cells to make up the same area as a big cell tower.”

The smaller towers mean better connectivity through business and residential districts, at a lower cost to the company that is building them.  However, it also means more poles.

Sometimes DAS can be attached to existing utility poles, but more often the poles needed are about twice as tall as existing electric/telephone poles.

The poles go in the public right of way between sidewalks and streets or along freeways etc.

“They need millions of these to run our smart systems,” Sluggett said.

In some communities, officials allowed towers to be built but did not understand what DAS was.  “Not everyone caught that they were adding poles and were surprised to see them popping up around town,” he said.

On the West side of the state, communities came together to form the Grand Valley Metro Council to collaborate on how to deal with incoming technology infrastructure requests.  Another group involved in the discussions is The Michigan Coalition To Protect Public Rights-Of-Way, which “was formed in 1996 by several Michigan cities interested in protecting their

citizens’ control over public rights-of-way, and their right to receive fair compensation from the telecommunications companies that use public property.”

The ability to license gives municipalities more control.  “Each community [in GVMC] requires a license.  We needed to get providers to acknowledge they needed our permission,” Sluggett said.  “This leaves to the discretion of the community where poles can be placed.”  The cities adopted a small cell DAS ordinance that calls for licensing.

Cities have also been able to get compensation for the use of public land.

An example given was of Grand Rapids and Verizon, where Verizon’s technology is attached to Grand Rapids street lights at a cost of $25-$155 per pole per month.

Encouraging entities to work together to share poles is logical, but not necessarily practical because companies like Mobilite are banking on being able to rent out their infrastructure to other companies, ie they want to own and control the poles.  And from a business perspective

there is no incentive for providers to share access, because having the best networks gives them competitive advantage.  “The communications industry wants to put their poles every 500 feet and they don’t want to share,” Watza said.

“What’s your defense? The Michigan Constitution,” he said.  Article 7 Section 27 establishes the authority of municipalities. “That is your property.  You have a right and responsibility to maintain it.  If they want to make money, they have to share the cost.”

The Michigan Municipal League 2017 Capital Conference took place March 21-22 in Lansing.  Oakland County Times will be featuring stories from the conference over the next few weeks.  If you’d like to sign up for daily headlines from Oakland County Times go to https://feedburner.google.com/fb/a/mailverify?uri=Oakland_County_115_News.

For articles from previous MML Conferences go to https://oaklandcounty115.com/?s=mml 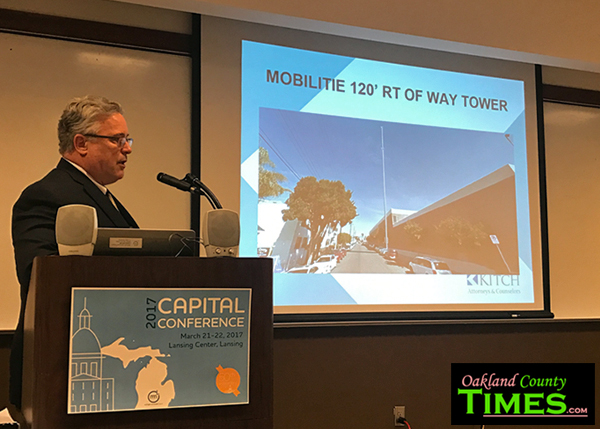 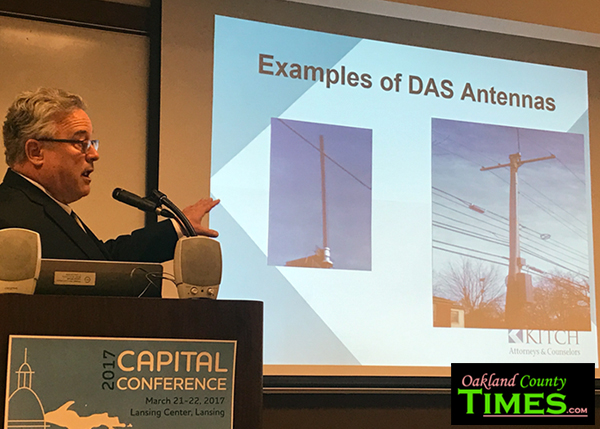 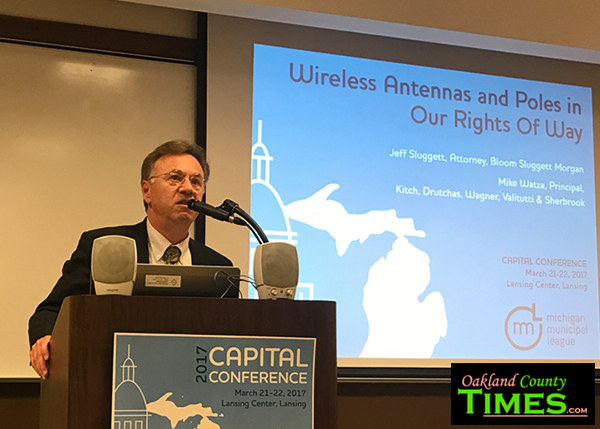