Wixom, MI – “Dear finder of these notes…I’m handing over to you a part, a very small one, which doesn’t say enough about what was really happening in the hell of Auschwitz-Birkenau. You have to imagine yourself what the reality looked like.”

The words were left by person held captive by Nazi’s in the early 1940s.  11 Million people were killed during the  Holocaust, mainly in concentration camps that included slave labor, firing squads, wretched living conditions, starvation, torture and gas chambers.

“They were looking for moments of love, of humor, the moments of the feeling of community,” said Teresa Wontor-Cichy of the Research Center of the Auschwitz-Birkeneau State Museum

of Poland to explain the artworks left by prisoners.

Untold numbers of people in the camps risked their lives to make art and sketches of the horror that unfolded around them.

Wontor-Cichy traveled from Poland to the Wixom Library to introduce a unique exhibit that will go to 16 US Cities.  The exhibit is Forbidden Art: An Exhibition of Photographs of Camp Art from the Collections of the Auschwitz Memorial.  The exhibit opened Sunday with an event which included small group tours of the exhibit.

The historian shared the story of the concentration camps, told though artworks and other historical records.

said that in 1939 Poland was essentially gone, with Germany taking half and the Soviets each taking a portion.

Auschwitz was made out of an abandoned Polish military base.  The Nazis soon took over the entire town for the camp.

“Prisoners were to be used as slave labor in the German economy,” Wontor-Cichy said.  Of the people in the camps, 1,100,000 were Jews, 150,000 were Poles, 25,000 were Sinti and Roma Gypsies, 15,000 were Soviet POWs and 25,000 were from various European countries.  “These were different people speaking different languages from different countries,” she said.

“They were told they were going to a new life.  They were allowed to bring items with them.  Many had documents promising them land, or jobs,” Wontor-Cichy said.  When they arrived those deemed “not fit for work” were sent to die and the others were sent to be slaves.

Wixom resident John O’Brien was moved by the story of Włodzimierz Siwierski, who made sketches of people and experiences on any kind of scrap he could find, including cigarette paper.  Siwierski made over 200 sketches, of which only 20 survived.  He had taken them with

him when the camps were liberated, hiding beneath adhesive bandages underneath his arm.

“My drawings to not render the horror of the camp,” Siwierski had said.

O’Brien was also impressed by atmosphere walking through the exhibit.  “There was  a very quiet reverence.  Everybody spoke in hushed tones.  It was very respectful to this exhibit.”  He noted that people of all ages, including high school students, had attended.

The display included photos of sculpture, sketches, paintings and illustrated books.  One book created by someone using only “MM” for their signature, had been preserved in the base of one of the buildings. Other artwork, along with documents about death, were found in a glass jar years after the liberation.  Another book, the “Buchenwald Diary,” is a 294-page document bound in human skin made by prisoners to document the crimes committed against the people in the camps.

“The reason I say that is facing such horrible circumstances, they did this because it helped them survive… Their need to get out what was happening was so powerful.”

Stacey Banks, Administrative Assistant to the City Manager of Wixom, had learned about the exhibit and gone to visit it when it was at Madonna University.  “I saw that it was really well done, and I started working on how to get it here,” she said.  “People came together and started looking for donations and for grants, because we can’t use any tax dollars.”

Center, helped bring the exhibit in.  Funding from the Wixom Community Foundation and the support of the local business community, provided for the reception.

“Each of these objects is telling us a lot about people, a lot of people,” Wontor-Cichy said of the artworks presented.

The following artists are included in the exhibition:

The anonymous artist with the initials MM 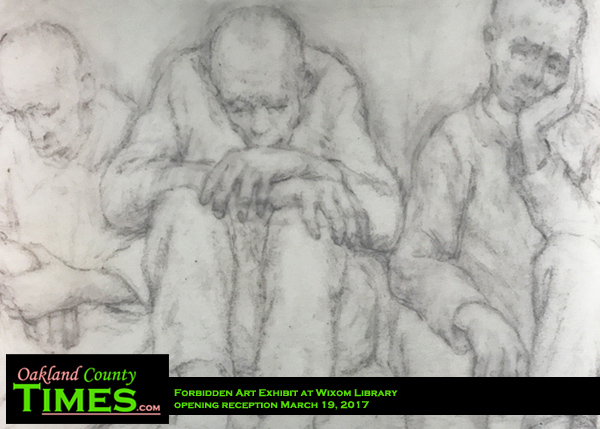 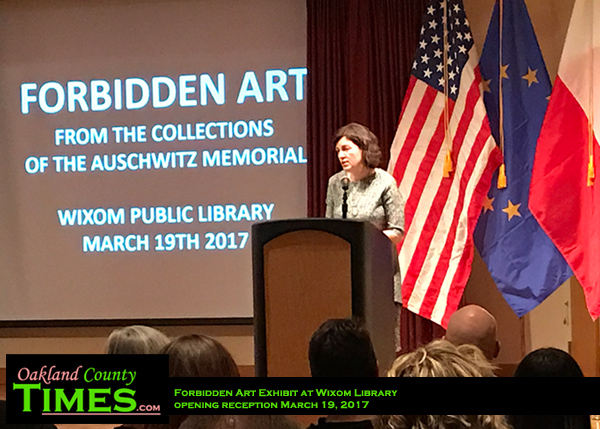 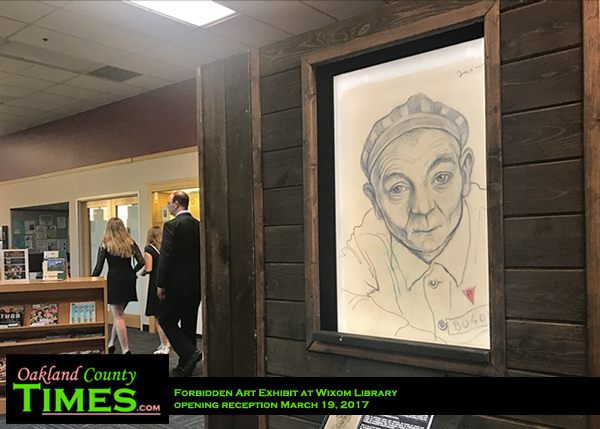 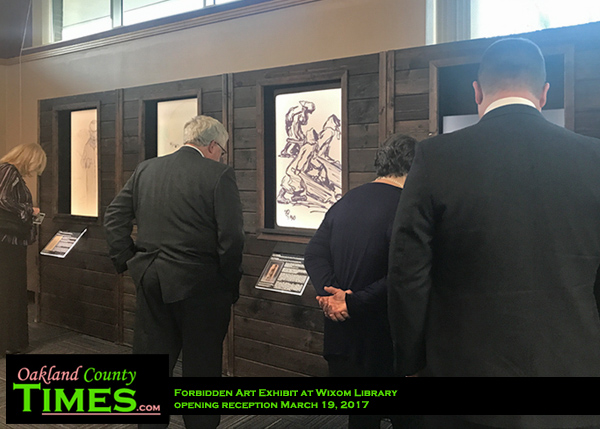 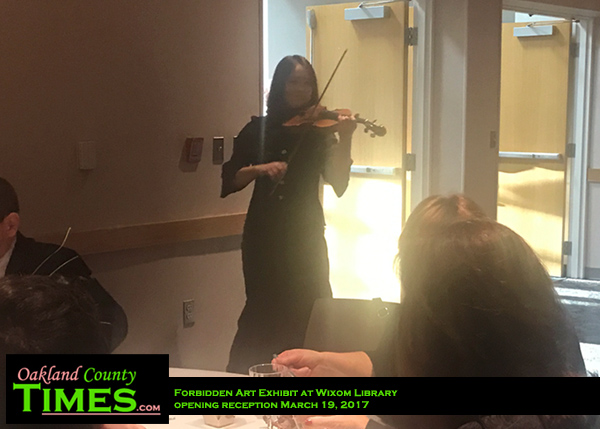 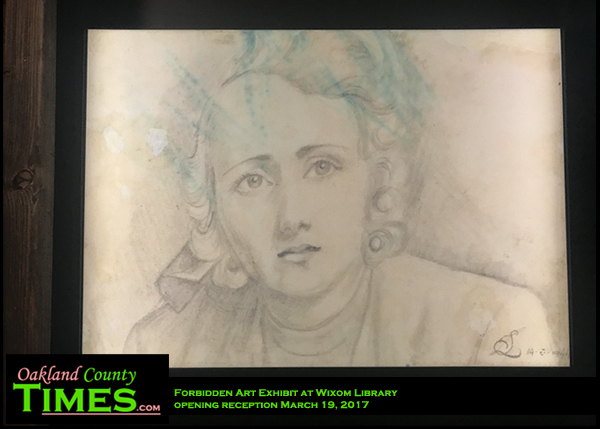 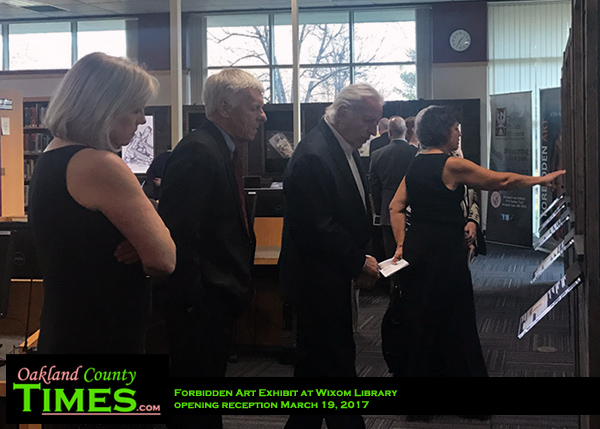 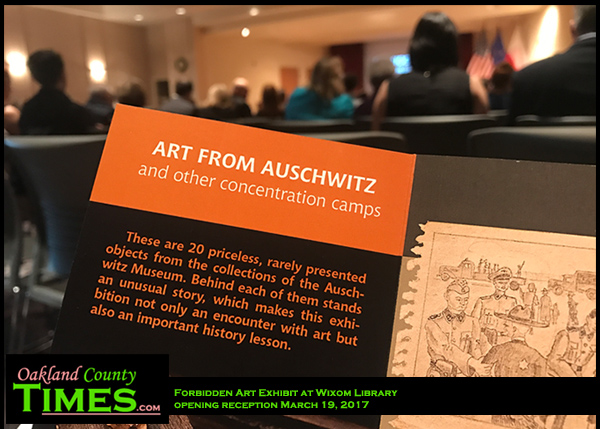 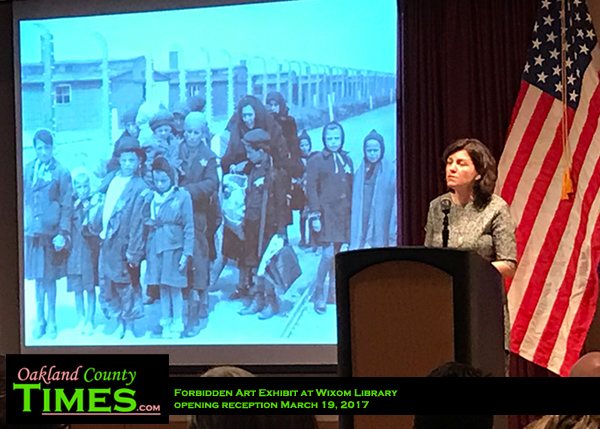