U of M Students Help with Ferndale Parking Deck Communications

U of M Students Help with

Ferndale, MI – As planning moves forward on adding a parking deck to Downtown Ferndale, the City has enlisted the help of students from the University of Michigan Citizen Interaction Design Program in facilitating some of the information sharing and feedback.

The parking deck will be built at the corner of W. Troy Street and Allen. Details of the project have yet to be worked out, but will be the result of the public engagement process.

A Parking Committee made up of made up of business owners (and one pastor) in the area (Dean Bach, Tom Pearlman, PJ Jacokes, Jacki Smith, Jim Pool, Brian Siegel and Tiffany Best) made the recommendations which were further vetted by Gibbs Planning before deciding on the W. Troy/Allen location.

“The knowns” of the project, according to a presentation by the Parking Committee, are that (1) the required parking supply increase will require four levels, (2) sustainable parking structures are more successful when combined with other uses, and (3) the parking structure must be safe and secure.

Potential features could include retail, office or apartment space that would bring in revenue to help offset the expenses of building and maintaining the parking system, and would meet the City’s Master Plan goals of growing density downtown to attract more daytime use of the

The location was presented to the Planning Commission in October, with a concept that would be would be four stories, with street level commercial on the first floor facing W. Troy and the potential for residential units and/or offices.  The deck would be constructed in such a way that it could support an additional two floors should the City want to add on vertically in the future.  Currently there are 138 spaces in the lot. The structure would bring that up to 390.  The architect emphasized that the presentation was a ““really high level conceptual phase,” just to give council an idea of what could be done at that location and how many spots could be added.

U of M students Danielle Santos, Yi Ann Chen and Alexandra Ramirez created a prototype for a

communications app they presented to residents and business owners at a meeting on Wednesday at Mejishi Martial Arts.

The prototype included a calendar feature for meetings and construction updates, posts from the public to share opinions and ideas, a place to ask questions of neighbors, a place to post complaints and a way to get updates about meetings.

“What we want to do is amplify citizens’ voices,” Ramirez said.  “What we’ve heard and read in surveys and interviews is there’s a lot of frustration with the idea of construction and communication with the city is one way.”

going on.  It’s not even about being heard.  It’s there is no information unless you look for it.”

The students are hopeful that the app they’re creating will change that perception. “Our commitment is to create two way communication,” Ramirez said.  “This is not just for the city to keep updating, you can create your own content.”

“We wouldn’t be here if the city wasn’t working on this,” Chen added.

The app is still in the prototype stage as the students seek feedback about the features they hope to include. Feedback from the app will be used along with other citizen input from public meetings and survey results to determine the direction of the project.

A survey in Oct. 2016 had 74 responses, which included business owners and residents.

Of those, ten of the responders expressed concern that the project would be mixed use, as opposed to a parking deck with no retail, office or living space.

Other concerns were about changing the community’s character, the impact on homes and businesses, concerns with the design, and wanting for more information and citizen engagement. There were also responses wanting more parking and mixed use.

The meeting to introduce the app was attended by about six business owners and residents who were primarily opposed to aspects of the development.

One business owner and resident suggested that erecting a simple deck without mixed use features would cut down on the length of time for construction and would mean a smaller sized deck.  “Mixed use takes longer because of all the planning that goes into it and all the plumbing and electrical work,” she said.  “Let’s just get one of those simple decks like they have in Rochester that can be put up in 60 days and be done with it.”

Another business owner was concerned about the aesthetics.  “These developments that the city approves have no character,” he said. “We need to create design standards so we’re not getting cookie cutter buildings that make us look like Royal Oak.”

Another said that the parking deck would be “like a monster looming over us.”

Several said there was not enough communication and engagement taking place.  One said they felt like the meetings, survey, and the apps were “just a way to pacify us.”  Another attendee was critical that the city had hired a consulting company, called Bridgeport, to facilitate community outreach and communications.

In an interview following the meeting, Assistant City Manager Joe Gacioch explained the City’s approach.  “We understood that it was necessary to make a strong commitment to

transparency, and public engagement on this project from the outset.  We launched www.parkferndale.com in the beginning so we had a place to publish all survey results, summaries from our three public meetings, information on project timelines, market studies, city planning documents, and even a tool that allows you to sign up for text or email alerts,” he said.  “There is no substitution for committing to consistent and strong communications to our businesses, residents, and downtown guests – It is also worthwhile to note that funding for Bridgeport and the rest of the project comes from parking related fees paid for by users of the parking system and not the tax payers.”

Discussion of the structure’s design are still being considered as the City is in the public engagement phase. As the process progresses there will be updates at www.parkferndale.com including announcements of public meetings.

that they are working with businesses to design an information tool that helps businesses receive and send communications about development in the most effective way possible.  This morning’s meeting was another step toward testing their ideas for such a tool,” Gacioch said.

Last semester students from the program created apps to help the city address the issue of rats, to recruit stewards for parks, to track leaf pick up and to engage with residents about issues bicyclists face.  Read more about their projects at https://oaklandcounty115.com/2016/12/09/rats-leaves-recycling-bikes-ferndales-new-civic-tech-solutions/

Read about other developments happening around Ferndale at https://oaklandcounty115.com/2017/02/17/whats-being-built-in-ferndale-check-out-these-developments/

To get daily headlines from oc115, sign up at https://feedburner.google.com/fb/a/mailverify?uri=Oakland_County_115_News. 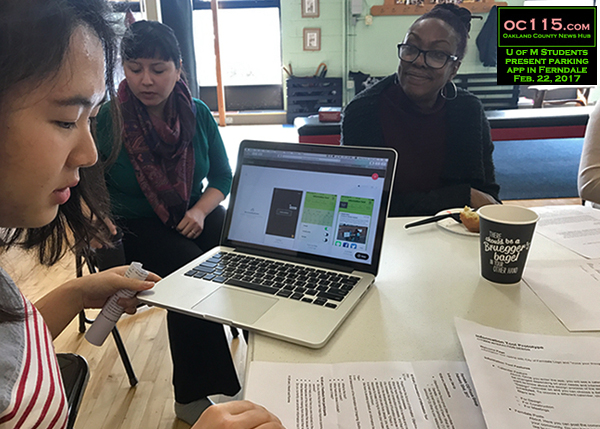 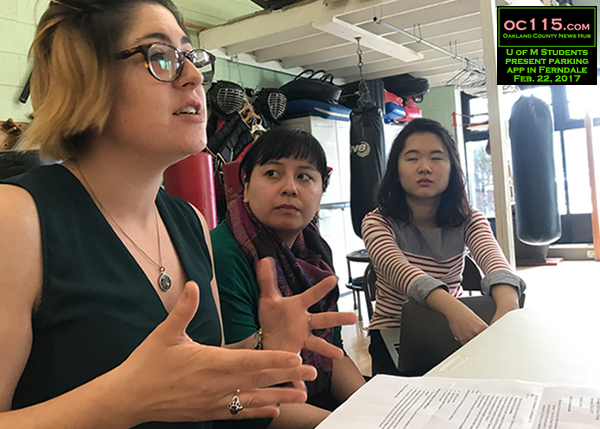 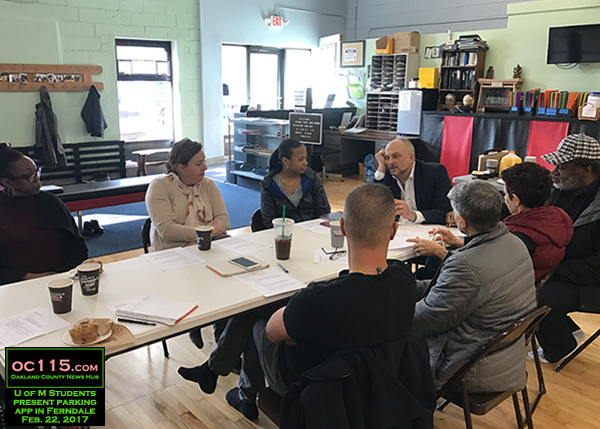