Ferndale, MI – After criticism from the Planning Commission about the lack of ground level features, developer Wolf River has revised plans for the Ferndale Apartments and gotten approval for Brownfield Redevelopment Funding.

The four-story apartment building will be constructed at 371-475 E. 9 Mile  (409 E. 9).  The finalized plans include 127 apartments, over 5,500 square foot of retail/office space, and publicly accessible green space on E. 9 Mile. The facade of the building will be mixed

materials to break up the space visually.

City Council voted Monday to approve Brownfield reimbursement not to exceed $2,643,920 over 17 years, followed by five years to capture the benefit of the City of Ferndale’s Local Site Remediation Revolving Loan Fund.   Monies in the SRRLF get reinvested by the city in future development project loans.

The funding will help with qualified expenses such as baseline environmental assessments, demolition, infrastructure improvements, site preparation and Brownfield plan preparation.  The reimbursement accounts for 14% of the total $16.1 million investment in the project, of which 86% is private capital.

Expected rent on the apartments would be about $1,200 a month for one bedroom or $1,500 for two bedroom. There will be 130 on-site parking spots, plus 15 on-street parking spaces in addition to parking for up to 50 bicycles.

Though the city has approved the Brownfield financing, the Brownfield plan must still be approved by the state, which could take several months, though developers hope to break ground this year. The property is the former location of the Ferndale Chamber of Commerce and FernCare Free Clinic.

Environmental remediation is needed because of the history of the property. According to the Brownfield proposal, “Several historical buildings existed on the Property  from  at  least 1931  until  approximately 1983.  These buildings included an auto repair/ machine shop, residential house, sheds, a commercial office building, and a commercial/ light industrial building occupied by a chemical factory. The buildings were all razed prior to 1987. A gasoline filling

The Ferndale Chamber of Commerce has moved into an office inside Credit Union One, and FernCare is now located at 9 Mile and Hilton.  The move has meant an increase in rent for the free health clinic, and donations are being accepted to help cover this cost at http://ferncare.org/donations/.

Learn more about the plans and the financing on the City of Ferndale Website. 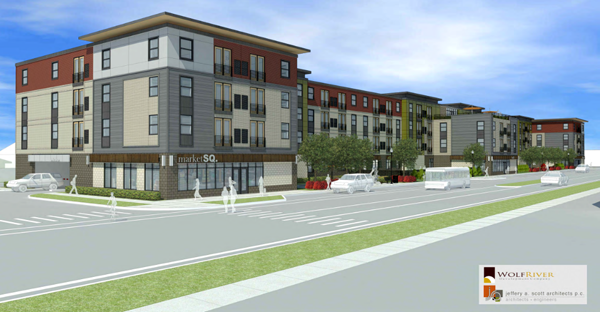