Bloomfield Hills, MI – The Cranbrook Art Museum is home to modern and contemporary art, with some permanent collections and some that are only temporary.  Among the hundreds of paintings, sculptures, and other pieces of art we found 15 things to share as a sampling of what the museum has to offer.

One unique collection is the “Cranbrook Time Machine: Twentieth-Century Period Rooms.”  This included the 1970s themed Cosmic Cave.  Most notable is the “Cave Rug” by Urban Jupena, created in 1973.  Also included in this display is Libyan Desert Glass that is 26 million years old.

Downstairs at Cranbrook is a room dedicated to the work of illustrator Edward Gorey, who lived between 1925 and 2000.  In addition to a variety of images, Gorey used unusual design techniques in creating books, postcards and play sets.

In the Twentieth-Century Period Rooms exhibit there is an intricately carved desk created by Johann Kirchmayer that is untitled.  It features religious-looking figures with Pope-like hats.

In the “Man Cave” room the dominant piece is a painting by Tom Wesselmann done in 1975 called “Smoker #18,” which features glossy lips, a manicured hand and a cigarette with whimsical smoke.

Another room features a beautiful pair of bronze candelabra called Venus and Vulcan, created in 1916 by Paul Manship.

Upon entering Cranbrook one might notice the stained glass installation.  This is a creation of

William Rupprecht called “Twenty-Four Scenes from the Book of Genesis,” completed in 1923.

Outside is fountain with several nude figures in a circle.   This is Carl Miles’ creation “Orpheus Fountain,” made in 1937.

There is an entire room that showcases new additions to the Cranbrook permanent collection.  Among them is Cay Bahnmiller’s “Basketball Blackboard,” created in 1982.  A detail of the oil and pencil piece is shown below.

In the basement is a room dedicated to the work of John Glick, including the featured plate from 1979 made of porcelain.

Another room of Cranbrook features an installation from 2011 which is a wall drawing inspired by instructions created by Sol LeWitt.  A guide at the museum explained that the instructions are sent to various places and someone takes them and tries to follow the directions, resulting in different art works based on the same idea.

The sound of the “The Truth Is I Hear You” Exhibit, by The Cause Collective can be heard though the gallery.  This project took filmmakers to various places to have people make short videos about what truth is.  One room featured people from Detroit and Flint. The next room featured international videos. And the third room was full of silver balloons and the opportunity for guests to write on them what their idea of truth is.  This is inspired by Andy Warhol’s “Silver Clouds.” 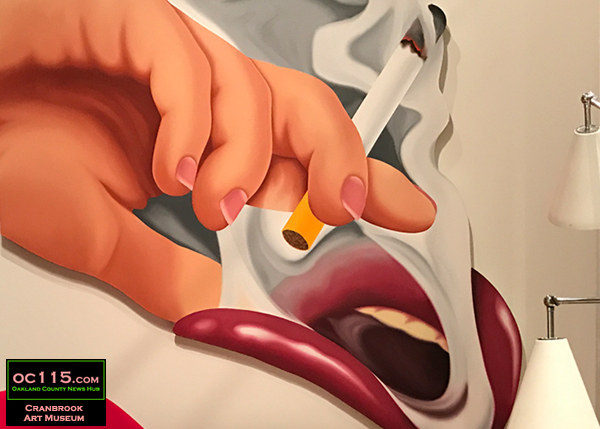 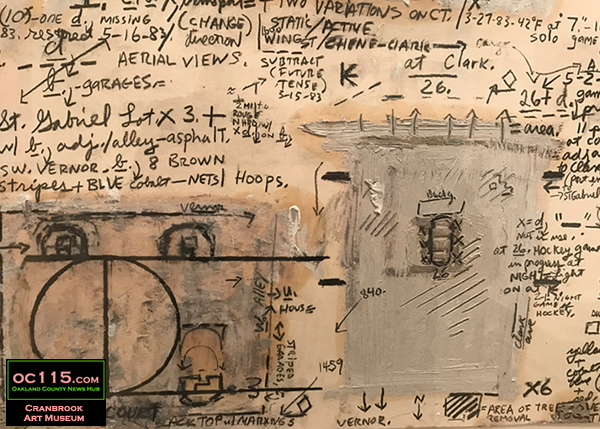