First Methodist Church Changes Lives
(Crystal A. Proxmire, Dec. 29, 2016)
Ferndale, MI-  When the time was right for Delando Perkins to give up his life of homelessness and addiction, The Ferndale First United Methodist Church gave him the first steps to a better life.  Now he volunteers at the church, helping to serve others who come for a community dinner once a month in the historic church’s basement.
On average 85 people come to the dinner, though last month the cold weather made for a bigger turnout of 125 guests, according to Pastor Robert (Bob) Schoenhals.  “It’s a mix of people,” Schoenhals said.  “It’s a community meal, so it’s open to anyone and there is no distinction between people.  It doesn’t matter where they come from or why they’re here.  Members of the congregation come, people from the community, people who are hungry.  It

doesn’t matter.  We’re all just here to share a community meal.”
The church shares its space with Christ the Good Shepard, a congregation that describes itself as “a progressive independent Catholic Faith Community.”  They practice Catholic traditions yet are not recognized by the Catholic Church because they accept people as they are, even if they are LGBT.
First United Methodist is also a welcoming congregation, even adorning the building with a giant “Black Lives Matter” banner signed by members of both congregations.
“That did get some response,” Pastor Schoenhals said with a smile.  “Did you see the picture on Facebook?”
The picture he referred to was of him and hip hop patriarch Russell Simmons posing in front of the sign. 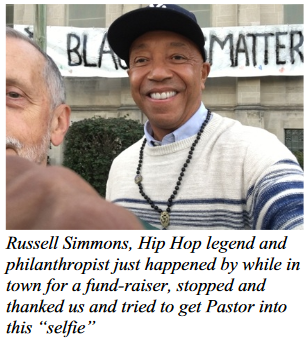 “I happened to be driving by and I saw that some people had stopped to take pictures, so I went back to talk to them.  I had no idea who the people were, I just wanted to tell them about church and let them know they were welcome. And it turned out to be the father of hip hop.”
Schoenhals was pleased with the response to the banner, not just from Simmons but from the community as a whole.  “I’d say 9 out of 10 responses were positive.  No, more like 99 out of 10,” he said.
Yet the momentary brushes with fame and even the righteousness of social policies do not compare with the love that accomplishes great things when

people come together in a community to uplift each other.
Take Perkins for example.  The 59 year old volunteer manned the desert table Wednesday night, inviting guests to a variety of sweet treats including pie, muffins, brownies and packaged Twinkies.
“I grew up in Detroit and was around people that I thought was friends. But they wasn’t friends,” Perkins said.  “I was about 21 or 22 when things was so bad I didn’t have anywhere to go.”
For over 25 years Perkins drank, did a variety of drugs, and found the time just going by.  “I’d work odd jobs here or there.  It was never enough to get a place, but it was enough to get messed up and not have to think.”

He’d find spots to sleep, mostly along 8 Mile, sometimes at shelters and churches.  Sometimes he’d save up enough money to get a cheap motel room.  Before the church helped him find a safe space, Perkins had been living underneath the trailer of a truck in run-down industrial area.  He spent nearly three decades of his life in the day to day cycle of searching and retreating.  He’d look for work, charity, food and drugs, then hide away as best he could to tune out the rest of the world.
“Most people didn’t know I was homeless,” Perkins said.  “I presented myself well so I could get work.  I maintained my personality.  I was always showing myself that I could support myself.  That was important.”
He got a job at Motorama Motel doing housekeeping and maintenance. He saw young people making the same mistakes as him and he continued to struggle with his own addictions in an environment where drugs

were common.  His job would be go to the rooms when people did not pay or when there was trouble.  He watched young people overdosing, and in the time he’d worked there he’d found three people dead.
“It wasn’t scary.  I’d try to wake them up.  Talk loud.  Go over and shake them.  I didn’t stay in the rooms or touch anything because I didn’t want my fingerprints on anything and get dragged into it.  The ambulance would come.  Sometimes they could wake them up. And sometimes they couldn’t.”
The experience led Perkins to want better for his own life.  “I decided it was time to move on.  I was in a hole.  I was caught in a hole and I’d try digging myself out but the dirty was just coming back on me.  I couldn’t dig any more.  I thought about all that time that had passed.  Most of my life. And I had nothing to show for it.  I wasted all those years with nothing to show for it. I just couldn’t do it anymore.”
Perkins knew about First United Methodist because of the meals and services.  He had stayed there in the past as part of South Oakland Shelter’s program where

churches take turns opening their doors for two cold weeks each year.
“The people here are good.  There are elders who know how to help people.  I like this church because you know that when they get money, you can see what the donations are used for.  You know they aren’t wasting money or being greedy.  They do good with it,” Perkins said.
The monthly meal is good for the guests, and for the volunteers.  “My goal is to give back as much as I can, to give back to the people who helped me,” he said.  When asked how he feels seeing other people who are homeless or struggling with addiction coming in, he said “It’s hard to see people in that position.  I don’t look down on them.  I’m no better than them. But it does keep me from going back and getting caught in that trap.”
Someone from the congregation helped connect Perkins with a job at Pop’s for Italian.  He does dishes and stock.  “The owner is doing a lot to help

me.  I know he’s helped people before and it didn’t go like he wanted it too.  I feel like I want to do a good job and make him proud.  Show him people can change and get better, that helping wasn’t a waste.”
Pastor Schoenhals said everyone has a story and he’s met some interesting people.  “The dinner is really what we are about as people trying to serve God, bringing people together.  It’s a relief for some people to sit together, to talk, to broaden their horizons.  As opposed to just being a charity, we’re creating a way to get to know people.”
Mack Spears has been coming to the community dinner for the past two years.  Though there is no pressure on guests to come to church, some have found it to be a natural pathway.  “It’s about an hour long,” Spears said of the Sunday services.  “There is singing from old hymn

books.  I like it.  Everyone is really nice.”
The community dinner is the last Wednesday of the month from 6pm to 7pm. Everyone is welcome and there is no charge.  The church is always looking for donations of food or finances, and community groups or families are welcome to organize, cook and serve.  Items vary depending on the donations.
The First United Methodist Church is located at 22331 Woodward in Ferndale.  To learn more, or to connect to make donations, go to http://www.ferndalefirstumc.org/.