(Auburn Hills Fire Dept, Nov. 8, 2016)
Auburn Hills, MI – At 4:25 AM on today’s date, Auburn Hills fire personnel were dispatched to a residential structure fire at 2692 Beacon Hill Dr. The address is a multi-family residential apartment building consisting of 16 apartments. The fire was reported to be on the deck of an apartment near the middle of the building.
Fire personnel arrived on scene and observed heavy flames moving up the rear wall of the building. Auburn Hills police officers immediately assisted by notifying the sleeping residents in the adjoining apartments. All residents were able to exit their apartment without physical assistance and none sustained an injury. Fire personnel rescued a cat from one of the adjoining apartments.
The incident was elevated to a 4th alarm due to the fast moving fire combined with the

complexity of a building with multiple apartments on three separate levels. Fire personnel from Rochester Hills, Rochester, Orion Twp., Independence Twp., Oakland Twp., Troy, Waterford Regional, and Bloomfield Twp. assisted on the scene. Personnel from Oxford Twp. and STAR EMS provided coverage in the city during the incident.
The American Red Cross and the Salvation Army responded to the scene to assist displaced residents and to provide refreshments for fire personnel. Six of the apartments suffered heavy fire and water damage. All other units in the building suffered some level of water and/or smoke damage. The American Red Cross is working with the property management to assist residents with securing a place to stay.
The cause of the fire is under investigation at this time. Preliminary investigation shows the fire most likely started on an outside rear deck. Auburn Hills police and fire investigators are being assisted by fire investigators from the Oakland County Sheriff’s office.
One Auburn Hills firefighter fell and suffered a leg injury while battling the fire. He was later transported to the hospital to be examined. No other firefighters were injured during the incident. 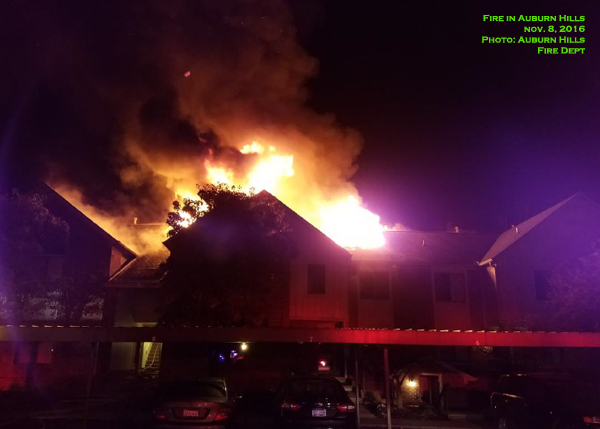 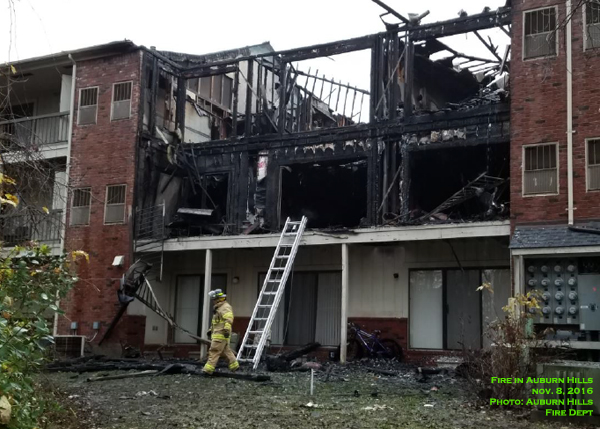