Sean Briskey Found Not Guilty in Justin Schalk’s Death
(Crystal A. Proxmire, Oct. 26, 2016)
Victorville, CA – The man who shot Justin “Bully” Schalk in the head and took his body to the desert to burn on April 14, 2014 has been found not guilty in the death.
The second trial concluded Oct. 13, 2016.  The first trial, which took place in Dec. 2015, ended in a hung jury.
Sean Allen Briskey testified that he’d shot Schalk after an altercation at his home in Pomona, CA.  Schalk had moved in with Briskey just a week before, and there had been a mix of partying and arguing in the home that escalated to the altercation.  Brisky testified that Schalk had head-butted him and threatened to shoot him.  Brisky used a .45 caliber gun owned by Schalk to shoot him.
Another man, Major Allen Austin, lived in a separate building on the property. He testified to having followed Briskey in Schalk’s SUV to the desert outside Victorville, and driven him back home. Briskey and friends cleaned up the home where the shooting occurred.
Austin and Briskey were arrested and charged with homicide, but Austin took a plea deal to testify against Briskey.  Briskey claimed self-defense in the first trial. In the second he was charged with arson and murder, because evidence showed smoke inhalation in Schalk’s lungs and carbon monoxide in his system.  The prosecution argued that Schalk was still alive when Briskey started the fire. The defense argued that Schalk had died much sooner, and that smoke had come from the burning of evidence at the home, not the burning of the vehicle eight hours after the shot was fired.
Schalk was a Ferndale native with ties to Berkley, Hazel Park and Ferndale because of his high school wrestling days, and his family who remains in the area.  He maintained Metro Detroit ties even after moving to the Los Angeles area where he did work as a bouncer, a model, and a personal trainer.  He also achieved some success as a mixed martial arts fighter (MMA), using the nickname “Bully.”  He was 40 years old at the time of his death.  Briskey is 32.
For more on the case, read previous oc115 coverage:
http://oaklandcounty115.com/2015/12/31/jury-unable-to-agree-in-trial-over-justin-bully-schalks-death/
http://oaklandcounty115.com/2014/05/07/plea-deal-moves-schalk-murder-case-forward/
http://oaklandcounty115.com/2014/04/24/suspects-plead-not-guilty-in-schalk-murder/
http://oaklandcounty115.com/2014/04/29/ferndale-area-fundraisers-for-murdered-fighters-family/
http://oaklandcounty115.com/2014/04/22/former-fhs-student-mma-fighter-found-murdered-near-la/
This story is presented without advertising due to the subject matter. Please support our sponsors at http://oaklandcounty115.com/sponsorshipadvertising/. 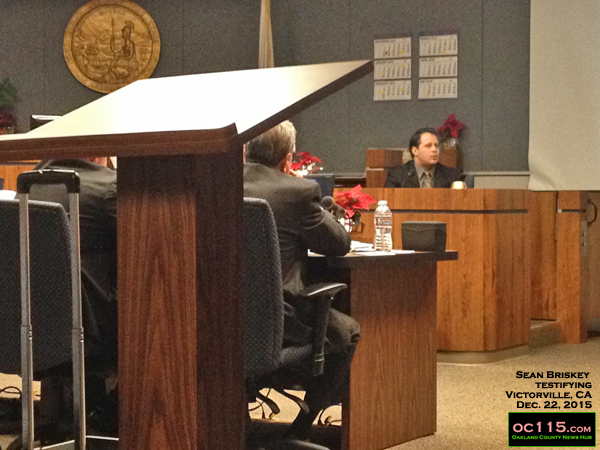