Holly, MI – When it was Mary Butler’s turn to pick the daytrip destination for The Roaming Reds Down Under, the historic Village of Holly made perfect sense.
“I like that it’s a little town.  It’s quaintness,” Butler said when asked why she picked it.  “It’s a rustic scene.”
The Roaming Reds Down Under are a state-wide Red Hat Society group, which is for women age 50 and up who want to get together for social support, to stay active, and to boldly enjoy the world as they age.  Known for their red and purple ensembles, they travel in packs out to meals and for various adventures.
Though technically a state-wide chapter, The Roaming Reds Down Under currently include

members from the Metro Detroit Area as far north as Saginaw.  Butler hails from Pontiac and had been part of the Roaming Reds since 2010.
“I enjoy the bling,” she said as she and her fellow “chapettes” enjoyed ice cream and baked goods at Cupcakes and Kisses.  “It’s a good look that red and purple.  It’s like royalty.”
Each month a different member plans the day.  In Holly the Roaming Reds shopped at various antique stores and specialty shops, had lunch at Bittersweet Café, and desert at Cupcakes and Kisses.
Nancy Lange of Lake Orion bought an antique serving dish at one of the Downtown Holly shops.  For her the daytrips are not just about traveling and seeing new places, but also about the sense of companionship and community that active members enjoy.  “Some ladies I didn’t

know before because they’re from other cities,” Lange said.  “But now we’re close friends.  The companionship makes a difference.”
When asked what her favorite daytrip has been, Lange recalled a visit to Saginaw where they met two former Red Hatters and recruited them to join the group.  “We always meet nice people,” she said.
The Queen Mother of the group (yes that is her official title) is Margie K. of Clarkston founded the chapter in 2003 and likes to recruit while they are out.  “We’re called the Roaming Reds Down Under because the ‘roaming’ part is that we like to travel, and we’re ‘down under’ because we’re under the Mackinac Bridge,” she said.
“It’s mostly to have fun, but also we are all here for each other.  If somebody gets sick we try to cater to them.  Our next even we’re going to have lunch and go visit our friend that’s in a

nursing home.”
Toni Barnett, who owns Cupcakes and Kisses, was happy to see her shop filled with women in purple and red.  “When we started this business we wanted it to be a place for people to come, congregate, and hang out where they can feel loved, accepted and welcomed,” Bennett said.  “We’ve got a group that meets here at 8am for Bible study for example. So more people are recognizing this as a place for gathering.”
Barnett invited the women to come back for Ladies Night Out, an event taking place through Downtown Holly on Nov. 11.
The Roaming Reds Down Under does not have an online presence and relies on word of mouth to recruit.  There are over a dozen members currently, ranging from age 50 to 91. More are welcome to join.  The group meets at least once a month at various places through the state.  For more information contact Margie K. at (248) 391-0785.
Holly is a great place to visit.  Learn more about the Holly Area and plan a “Daytrip to Holly” at http://oaklandcounty115.com/category/blogs/daytrip-to-holly/. 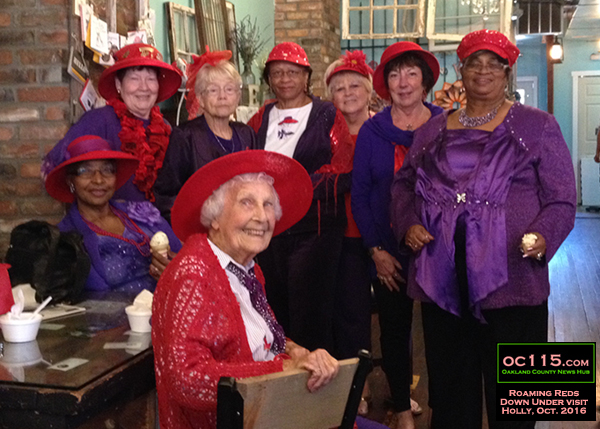 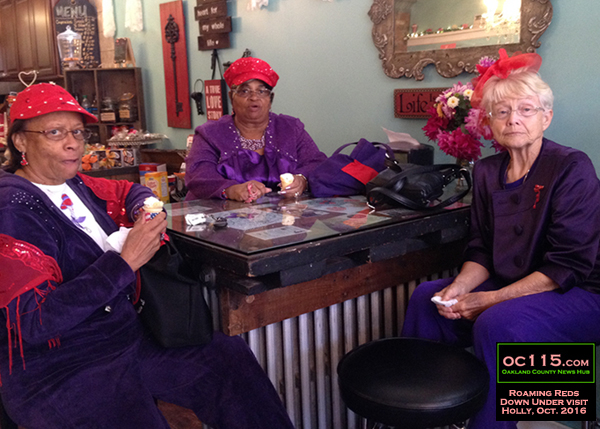 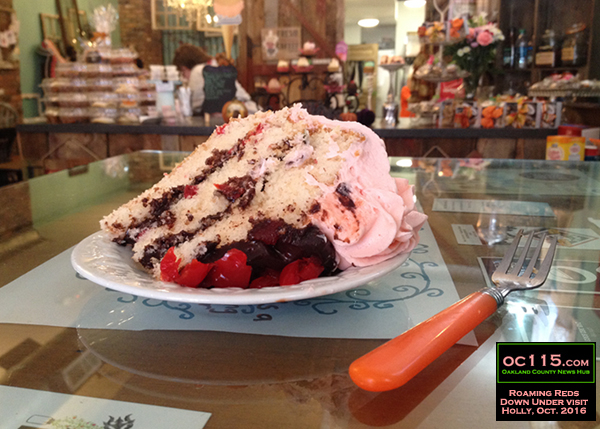 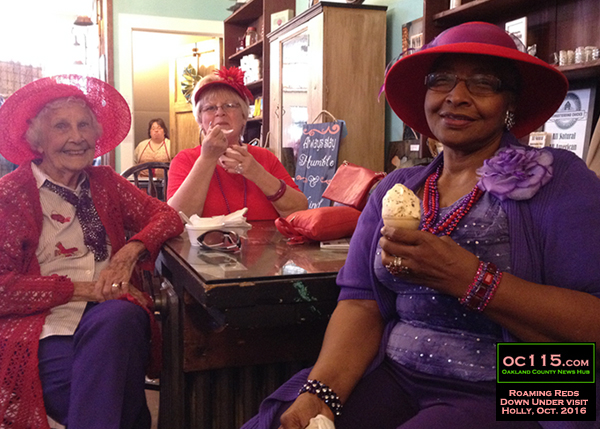