Women Who Care Group Given Inaugural Rochester Hills Community Excellence Awards (video)
(Crystal A. Proxmire, March 31, 2016)
Rochester Hills, MI – “You’ve just got to go out there and finish faster.”
That’s the key to winning, according to Rochester Hills native Desiree Linden who is going to compete in the Olympics for the second time later this year as a long distance runner.  Linden was honored Tuesday with the first inaugural Community Excellence Award at the Rochester Hills State of the City Address.
Mayor Bryan Barnett presented Linden with the award in a pre-recorded segment that was shown on the big screen at Stoney Creek High School.
Linden told the Mayor that she loved training on the Paint Creek Trail.

“It’s an amazing surface to go out and log a ton of miles,” she said.  “It conveniently stops there by Knapp’s Donuts so I can get a fritter to polish off.”
Mayor Barnett asked Linden what she thinks about at the starting line.
“It’s big excitement,” she said.  “It’s the biggest stage of the world and you’re wearing USA across your chest.  And you have the hometown of Rochester Hills in your heart.  So it’s great to go out there and put on a show.”  Linden will be going to Rio later this year to compete against women from all over the world.  In 2012 she ran in the Olympic Summer Games in London but was unable to complete the marathon due to a fractured femur.
The second-ever Rochester Hills Community Excellence Award was given to 100 Women Who Care, a fundraising collective that has donated over $200,000 to local organizations who do good work in the Greater Rochester area.
According to their website, “100 Women Who Care was started in November of 2006 by

Karen Dunigan of Jackson, MI as a brilliantly simple way to raise money efficiently and quickly for local charities/non-profits/worthy causes. Her group of 100 women, at their first one-hour meeting, each wrote a check for $100 directly to the charity, raising $10,000 to buy 300 new baby cribs for an organization in their city. Since then, they have grown to over 200 members and chapters are forming all over the country. She’s been interviewed on CNN and other cities are forming groups.
100 Women Who Care Greater Rochester Area was launched in April 2013 by Barbara Donohoe, Linda Chayka and Amy Whipple.”
Several groups that got donations through 100 Women Who Care were part of a tribute video shown at the State of the City.
Among the recipients of funds was Dutton Farms, a program for adults with special needs.  “Their donation is probably 20% of our annual budget,” said Jeanette Brown of Dutton Farm. “We created a sensory room so adults that have behavior issues, autism, that can’t focus for a

long time on one thing or are in a really high stimulated environment can retreat to the sensor room, regroup, before they go back to the work environment.”
Faith Works used money from 100 Women Who Care to do construction projects for those in need.  They build wheelchair ramps for needy people and helped a family by making a room in their mobile home into a handicapped accessible shower.
The Sand Castles Program provides grief support programs for children and teens.  The funds they received were used to help with garden stones and activity supplies.
The Power Company Kids Club is an organization that serves kids in the Pontiac Area with food programs, activities, mentorship and anything they can do to help support children in the community.  Pastor John Gunn is grateful for the 100 Women Who Care gift that enabled The Power Company Kids Club to purchase a 15 passenger van to help get kids to events and programs.
“I look at these women as being more than just interested in the needs of others.  They’re doing something about it and they’re investing themselves and their finances in becoming a part of making a difference in our world,” Pastor Gunn said.

While the awards are new, the State of the City Address is a 32-year-old tradition, and Tuesday’s was the 10th for Mayor Barnett.  The Mayor has taken the occasion from a simple speech in Council Chambers with a handful of attendees, to a gala event reminiscent of a large Hollywood awards night.
“The crowd looks red carpet ready tonight.  You look good,” he said.  “It’s probably the biggest night in Rochester Hills every year and it’s not because we are simply celebrating fashion. The City of Rochester Hills has had another exceptional year, a golden year, if you will. And much like the entertainment industry gathers once a year to tell their stories, we do the same.  Stories of heroic achievement, or personal accomplishment, of kindness and service to others, of groundbreaking

innovation and nation excellence all on our 32 square mile stage with our beautiful community as the backdrop.”
The event celebrated the successes of Rochester Hills, which is now the 13th largest city in Michigan.  He touted low vacancy rates, including just 3.4% vacancy rate in office parks.  Unemployment is at 3.5%.  One thing Barnett is proud of is the Mayor’s Business Council, a program where he and city staff meet with owners of various types of business to discuss how Rochester Hills can help connect the dots to make an even better business environment.  “Our concept is simple.  We don’t want to be in your business, and we shouldn’t be.  But if there is a way we can support you and help your business grow that is a role we can and will play,” he said.
Since 2007 the city has seen 90 new high tech companies move in and 9,500 tech jobs created.  And residential development continues to grow, including over 400 lofts, condos and apartments scheduled to be built in the coming months.
Check out the video below to hear more of the city’s successes:

For our ever-growing Rochester Hills news section go to: https://oaklandcounty115.com/category/news-by-city/rochesterrochester-hills/.
For a list of once-daily headlines sign up at https://feedburner.google.com/fb/a/mailverify?uri=Oakland_County_115_News. 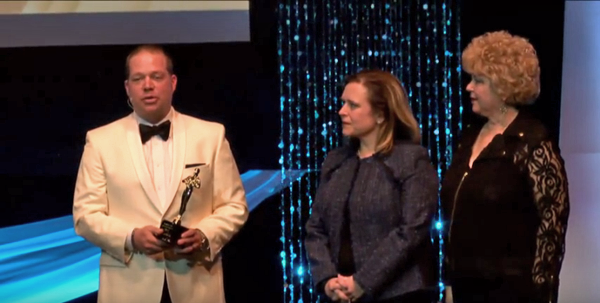