Planned Parenthood in Ferndale
(C. Proxmire, photos: Deb Young, Aug. 22, 2015)
The Planned Parenthood location on Woodward in Ferndale is no stranger to protests, but Saturday when a group of people stood in the median with signs against the reproductive healthcare provider, others showed up with signs of their own.
Protesters stood in the median of Woodward with the largest sign stating “PP Sells Baby Parts,” a reference to a video that was released last month by Center for Medical Progress. The video

shows heavily edited footage they obtained with people from Stem Express and Planned Parenthood talking about the costs associated with obtaining aborted human tissue for stem cell research. Stem Express is a company that Planned Parenthood works with in states where aborted tissue can be donated for research. The video has footing in a lab area of StemExpress where fetal tissue can be seen.
Tissue is only donated in cases where the patient consents to the donation.
The video has been widely critiqued. Factcheck.org published “Unspinning the Planned Parenthood Video,” that breaks down the laws governing tissue donations and other aspects of the video people may be confused by. Another organization that provided solid context is MediaMatters.org, whose “Seven Things Media Should Know About the Third Undercover Attempt to Smear Planned Parenthood” provides context. Snopes.com also took the video on.

we are ever aware of an instance where those standards aren’t being met.
“Extremists who oppose Planned Parenthood’s mission and services are making outrageous and completely false claims. They are engaged in a fraud, and other claims they’ve made have been discredited and disproven.” Read the entire statement at http://plannedparenthood.org/about-us/newsroom/planned-parenthood-statement-on-latest-false-claims.
In front of the office, those who stand with Planned Parenthood did so with signs like “Using

lies to cheat women of their choice isn’t righteous. It’s evil,” “It’s not a chicken it’s an egg,” and “I stand with women. I stand with Planned Parenthood.”
Deb Young of Ferndale was among those who saw the protest and stopped to join the counter-protest. “As long as people keep trying to take away a women’s right to privacy and control over her own body, I will be pushing back,” she said.
The Oakland Press was on hand for the protest and spoke with those who oppose Planned Parenthood.  One claimed that saw a fetus moving and alive in the petri dish.  Another said that killing a child in the womb is insanity and that protests are growing because the President of the country favors them.
To learn more about Center for Medical Progress visit their website at www.centerformedicalprogress.org.
For more on Planned Parenthood go to www.plannedparenthood.org/planned-parenthood-mid-south-michigan/. 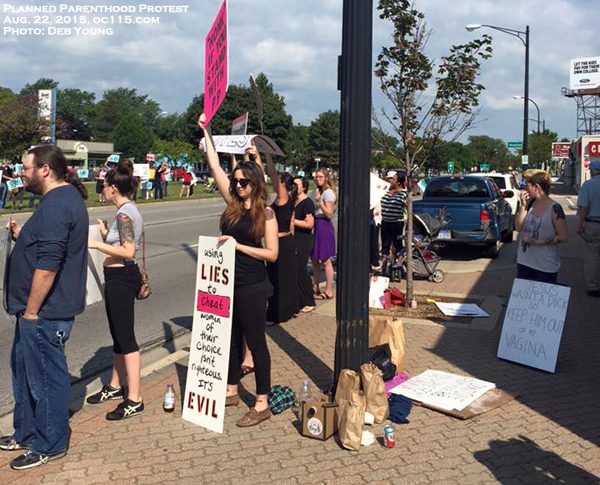 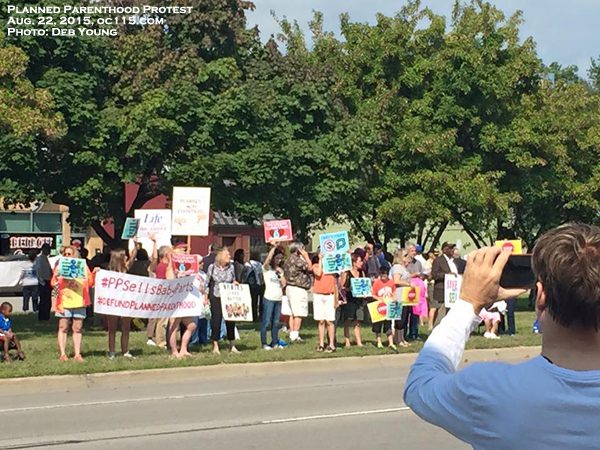 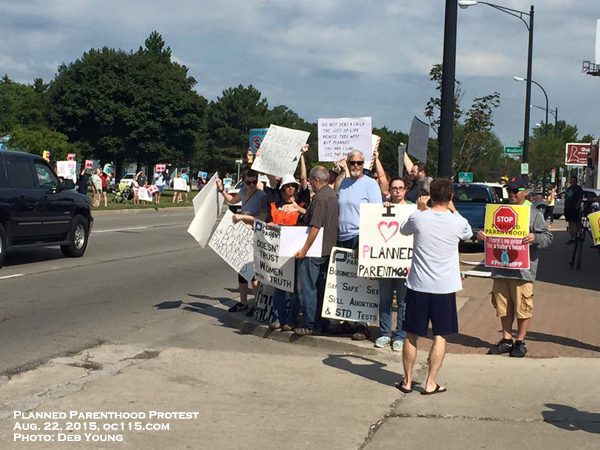