(Crystal A. Proxmire, July 20, 2015)
Neighbors saw a triumphant scene on Seminole Drive in Royal Oak on Saturday.
Perched high over the heads of her friends and family, and donning her helmet like a crown, two year old Aurora Wadle was regally escorted up and down her street on horseback. She looked back at neighbors who smiled and waved as she passed, and she kept looking down to see that her family was close by.
Aurora’s horseback stroll was a victory lap of sorts. The toddler is recovering from 24 weeks of

Chemo Therapy that ended about a month ago.
Volunteers from Camp Casey, a nonprofit specializing in bringing horse-related respite to children with cancer and their families through Horsey House Calls, Cowboy Camp Outs and Outlaw Outings, surprised Aurora and her loved ones.
They arrived at her door with Queen Bee, a horse that came from Ireland with a shamrock bleached into the hair of her hindquarter. Friends and family gathered on the lawn while Aurora and the other kids sat on top of overturned buckets to learn about grooming the animal.
The kids took turns petting and brushing Queen Bee, while the gigantic, gentle creature munched away at the Wadle’s lawn.
The children painted picture frames, devoured pizza and took turns taking Queen Bee for a spin

up and down the street.
Aurora was shy at first, but after seeing some of her friends ride, she let her mother and the volunteers lift her into the saddle.
“This is a memory she’ll have her whole life,” said Kelly Wadle about her daughter. Aurora and her brother Parker are twins, and they have a 7 year old sister named Belle . Only Aurora had the Stage 3 Wilms’ Tumor, a cancer of the kidneys.
As the women raised Aurora up, they had to be careful not to jar the port on her chest where doctors can directly inject medicine. The port is like a part of her, at least for now.
“She goes back in three months for a scan and if she looks clean then she can get the port out,” said the child’s great aunt and nanny Melinda Davis.
“She’s a brave one,” Davis said. “Even going through radiation she just wanted you to hold her.

There were some bad days, but she really just wanted to be held.”
The cancer seems to have been knocked out by treatment, but not without a cost. “She had to do 7 days of treatment right in a row. It was a lot for her to handle. She lost the ability to walk. Her arms and legs shook. It was scary to watch her go through that. But she was a trooper though.”
With the help of equine therapist Elizabeth McKeen, Aurora conquered her fear and enjoyed the ride. The other kids loved riding Queen Bee as well.
McKeen has been volunteering with Camp Casey for five years. As an equine therapist, she sticks by the animal’s side during the Horsey House Call, and is experienced at making sure the horse and the child are comfortable with the rides.
She was two years old when she first rode a horse as well. “I told my parents I wanted a horse,

and they didn’t believe me,” she said. “But I kept asking and asking. Finally they took me seriously.” McKeen was 13 when they gave in and bought her one. They also let her go to Black River Camp where she eventually went on to work as a counselor. After that she played polo at Michigan State. Several of the volunteers for Camp Casey met because of their love of horses. And being able to share that joy with others helps keep their friendships strong.
“I’ve always been really involved with horses and I’ve expanded that love to helping kids. This is a great way to spend a few hours, making someone’s life better with horses,” she said.
Molly Reeser founded Camp Casey after getting to know Casey Foote, a girl who shared her love of horses up until passing away at the age of 12. A one-day event in Foote’s honor blossomed

into an organization that helps connect kids and horses across the state.
“Horsey House Calls are limited primarily to SE Michigan due to our volunteer base, limited funds and equipment,” Reeser said. “However, families from across Michigan can participate in Camp Casey’s other signature program, Cowboy Camp Outs, that scholarship over 20 families each summer to enjoy an all-expense paid horseback riding getaway.”
Horsey House Calls happen nearly twice a week from June-October reaching around 20 families in Southeast Michigan. Camp Casey is currently working to expand their hoof-print by setting up a Horsey House Call satellite program in Grand Rapids by 2017.

Like all of Camp Casey’s programs, Horsey House Calls are 100% free to families. Camp Casey has recently opened their parameters to serve children with sickle cell disease and aplastic anemia as well.

While spending time with horses and making children smile seems like a bunch of fun, the volunteers spend hours in prep time for each visit, and the clean up when they’re done. Reeser also is constantly fundraising to make the visits and the camp successful.
“I like to come to these Horsey House Calls so I can recharge my batteries. I spend a lot of time behind the computer, writing grants, fundraising. Coming here reminds me of why I do all that stuff. It keeps me going at it. Plus, you get to see the looks on their faces when they come to the door and they see there’s s a horse there to see them!”
The fundraising can be fun too. Camp Casey often partners with local festival organizers to be part of fundraisers. For example on Aug. 8 volunteers will pour beer for the Oak Park Summerfest. They also host their own events, like Cowbelll Pub Crawls.
Camp Casey is always accepting applications from volunteers and those who can benefit from their cost-free services. “Like” them on facebook at facebook/campcasey or visit www.camp-casey.org for more info. 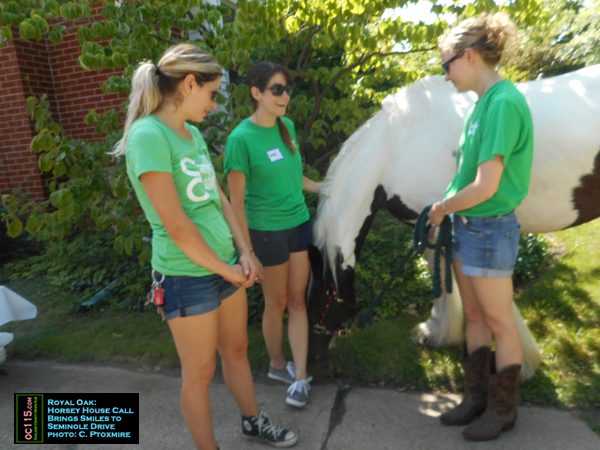 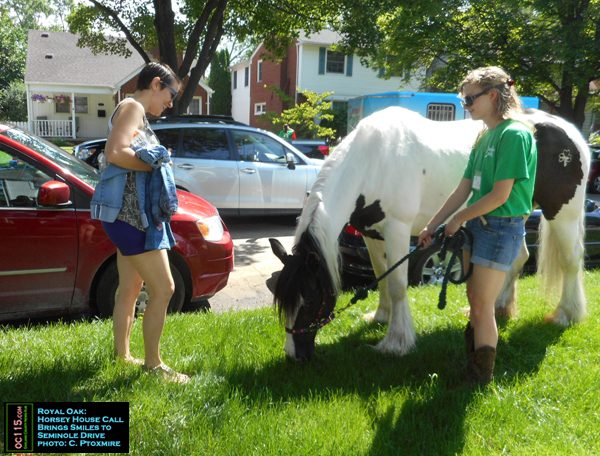 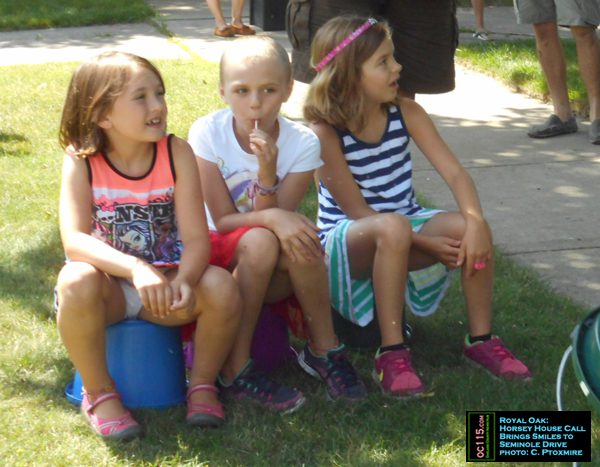 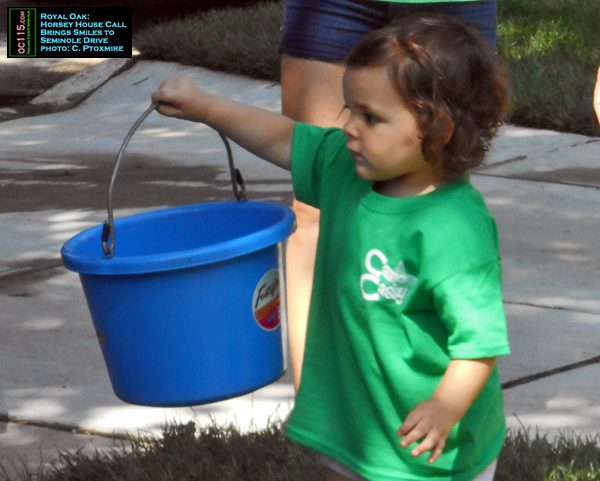 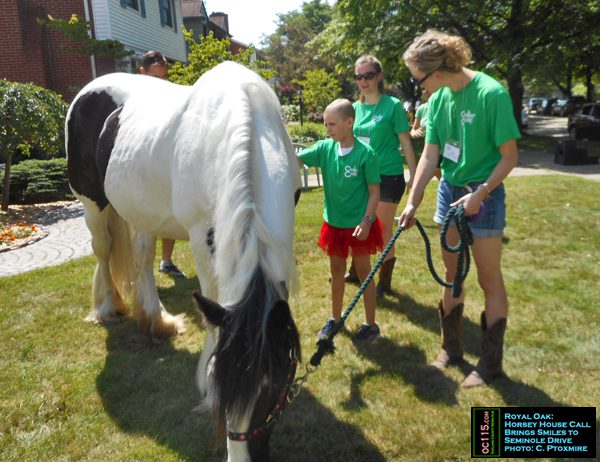 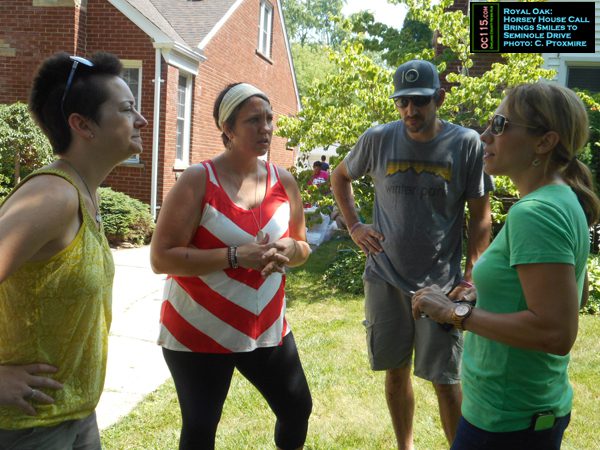 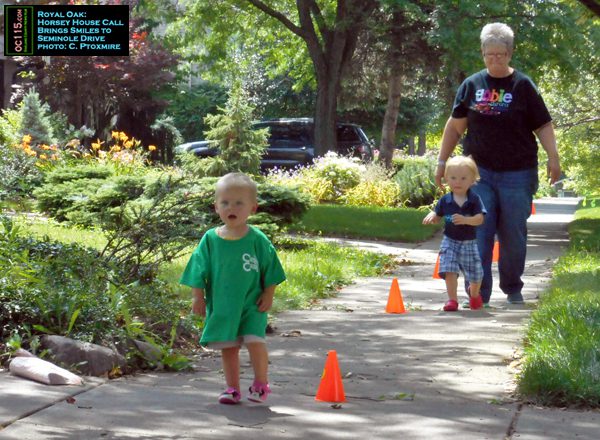 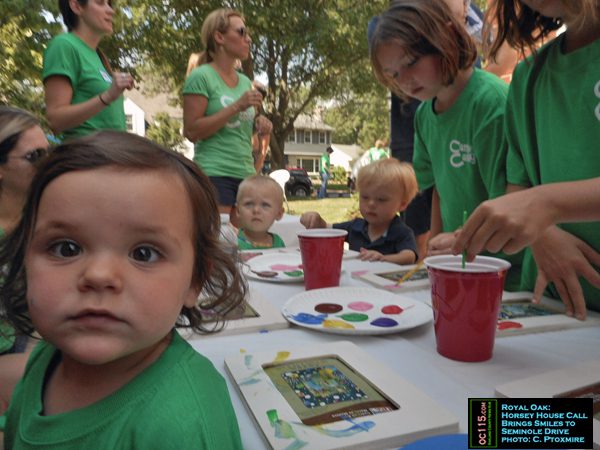 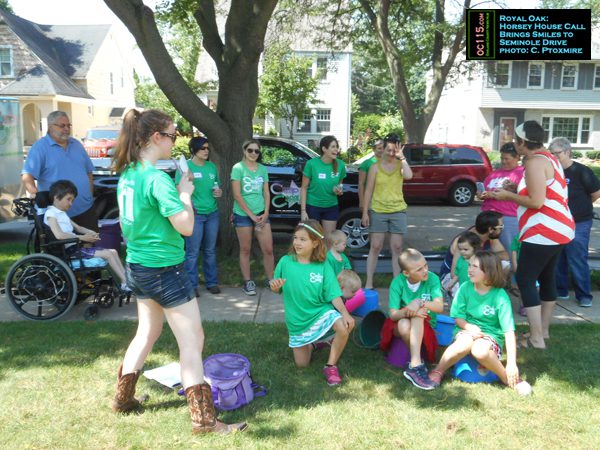 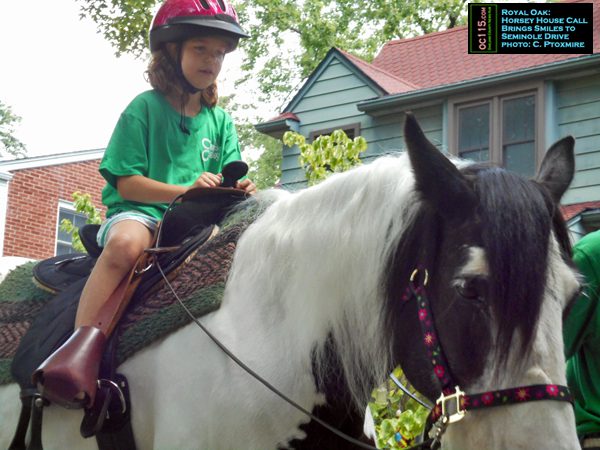 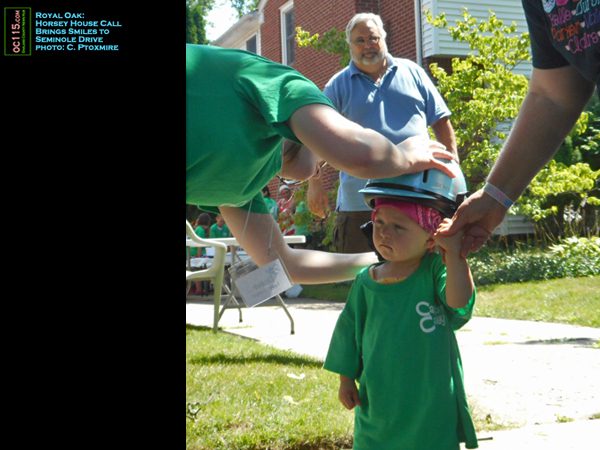 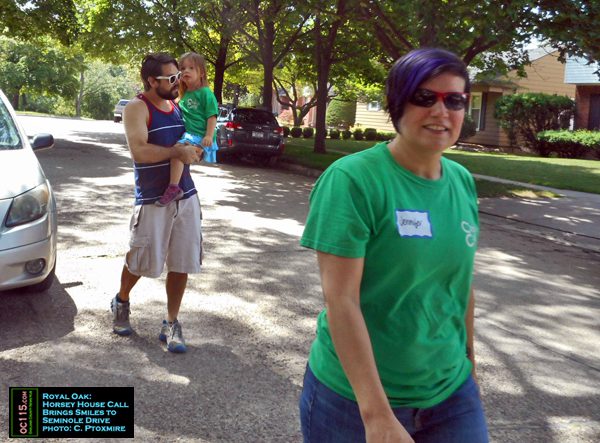 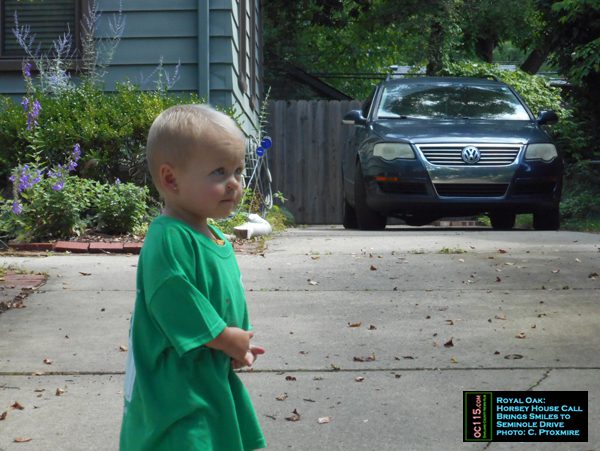 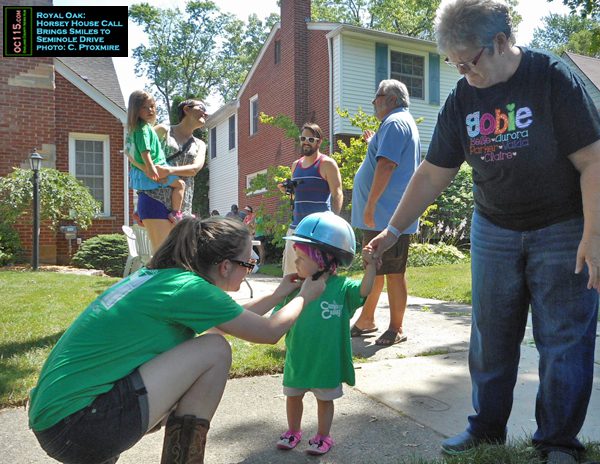 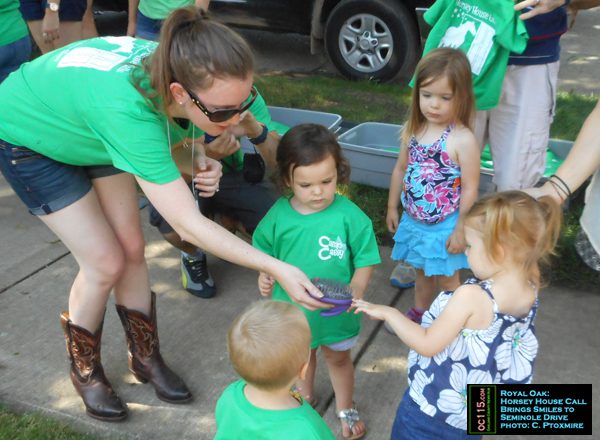 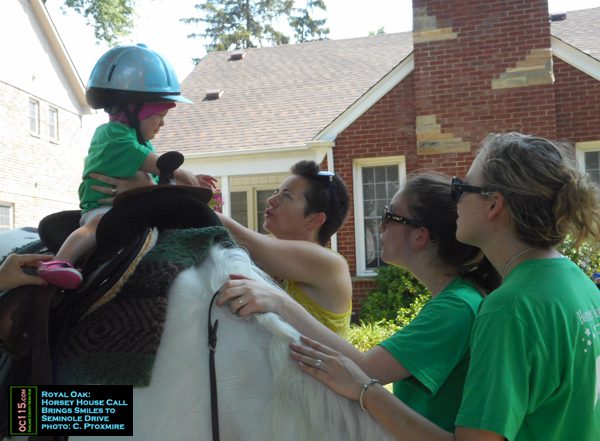 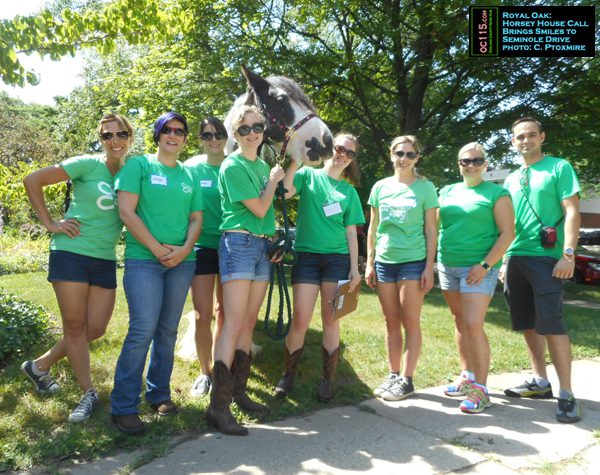 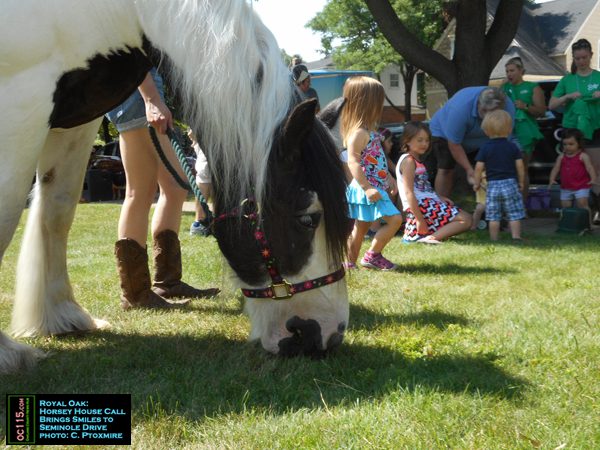 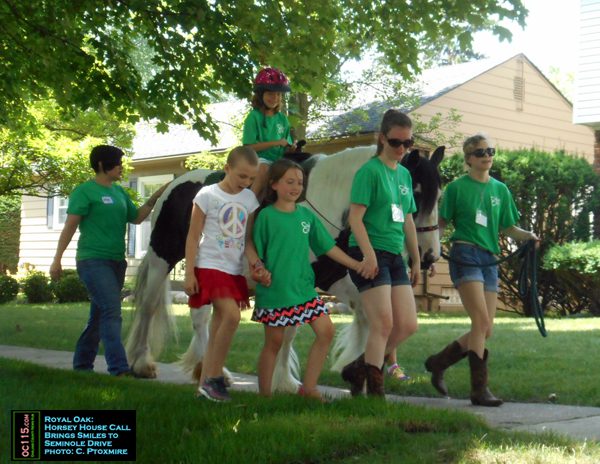