Farmington Hills Gets Goat to Help with Landscaping

Farmington Hills Gets Goat to

Help with Landscaping
(City of Farmington Hills, June 23, 2015)
The City of Farmington Hills will soon be implementing a pilot project on the City Hall Campus that involves a weed-eating goat! Goats are being used in several metropolitan areas and on forward-thinking private business campuses, such as Google, as an eco-friendly means of removing unwanted vegetation from open areas.
Here in Farmington Hills, the storm water detention basin on the City Hall campus at Eleven Mile and Orchard Lake Roads is overgrown with invasive plants that need to be cleaned out.

Rather than use chemical or mechanical means to remove the plants, the Department of Public Services researched using a goat for vegetation management.
“Pilot” the goat, named for his participation in this pilot program, was procured from Oakland County Animal Control. During weekdays, he will be safely tethered near the detention basin on the City Hall campus and monitored daily by City staff. The goat will be housed during evening hours in a special covered pen within a fenced area behind Police Headquarters. On weekends, Pilot will head to a nearby home to stay with a local homeowner who keeps other neutered goats and volunteered to care for him.
Before the decision was made to use the goat for vegetation management, staff members explored issues of public safety and ensured humane treatment of the animal. Goats are

considered to be domesticated and docile, but the public is asked not to pet or disturb Pilot while he is “working” and eating the vegetation near City Hall.
The goat’s droppings will not be a public health concern, since they are primarily plant matter and will essentially function as a fertilizer. The droppings will provide nutrient-rich organic matter that will actually improve soil conditions on the land near the detention basin.
“Goats provide a safe solution to problem vegetation and enhance the environment instead of harming it,” said Public Services Director Gary Mekjian. “Pilot will eat the phragmites and

several other invasive plant species. Plus he’ll stomp down the plants with his pointed hooves and keep them from growing back.”
While herbicides may have provided a faster means of killing a wide range of vegetation, the City of Farmington Hills has long prided itself on being a “green” community with a demonstrated commitment to environmental sustainability. Herbicides pose a danger of toxin build-up in the soil and can contaminate surface and ground water, causing potentially harmful effects on both animals and humans, and damaging other vegetation.
Pilot the goat will provide a more eco-friendly means of removing the overgrowth of vegetation and he will also eventually help restore the land at the detention basin to its healthy, functioning state. Plus, by practicing the centuries-old tradition of using goats to clear land, Farmington Hills will once again be on the cutting edge of the latest environmental trend! Learn more about the City of Farmington Hills at http://www.ci.farmington-hills.mi.us/. 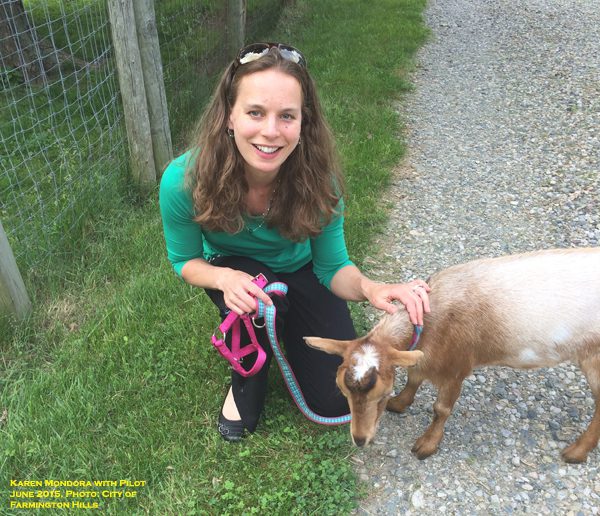