for Magic Bag
(Crystal A. Proxmire, June 3, 2015)
Something big is coming to Downtown Ferndale.
A grand vision is finally coming true for The Magic Bag. The theatre is expected to be unveiling a new marquee this summer. With “Ferndale” formed in fabulous neon letters across the base and the Magic Bag name spelled proudly down the 19 ft. tall extension, the new signage is sure to capture the attention of those driving along Woodward.
The sign also may spark nostalgia as people remember the towering marquee of Radio City

which used to be a focal point of Downtown Ferndale.
“This location has a historical quality and is the only traditional downtown theatre in Ferndale. Built as a theatre in 1918, the American Movement architecture has remained intact with its round top roofline, punctuated with finials and geometric inlays, influenced by art deco design. The Magic Bag, since the 1990’s, has sought to remain unique and historical, however they now wish to restore the classic marquee look with appropriate proportions and height,” reads the staff report recommending the approval of variances to existing sign ordinances. The location is registered as an historic building, and the City’s Master Plan recognizes the need to

renovate and maintain it.
“A variance is needed for the reason demonstrated in so many towns – The revival of the “good old days” of vaudeville and theater – enhanced with beautiful, fun, decorative marquees. Our building is unique, distinctive and timeless. We are going back in time to re-create a mood, A feeling, a destination,” reads the description in the application. “The frontage of our building is potentially magnificent. We believe we truly have a diamond in the rough.”
The Planning Commission has unanimously approved the variance request, and if all goes well the sign will be up by fall.
Magic Bag Chief Operating Officer Robert Littleton is ready. “Rehabbing the marquee has been in the works for years. The late Jeremy Haberman and I often times exchanged ideas after the

venue was deemed a historical building, but we never got around to it. Adding a sign to the marquee that is not only an homage to the old Radio City here in Ferndale, but to all historical theatre’s across the land, just seemed right. And adding Ferndale to the sign was out of pure love for our city. Since this theatre is a relic of the city’s past, it’s important to share its future, you know?”
The building’s history is a story in itself. According to Cinema Treasures, it opened in 1921 as The Ferndale Theatre. The 425-seat theatre was renamed Studio North in 1961 and soon began screening art house and independent films until about 1976 when it began showing adult films, and the City successful shut it down in 1989.
“In 1991, after an extensive renovation, which also reduced the theater’s seating to 300, it reopened as the Magic Bag Theatre, which features concerts as well as “brew ‘n’ view”-style

movie screenings,” according to Cinema Treasures. “The theatre had an ownership change and remodel in April 1996 and was remodeled once again in 2005. The 2005 remodel expanded the lobby, remade and expanded the bar area and remade and expanded the bathrooms.” The venue is popular for local and nationally-known musicians.
The existing marquee is 6ft tall. The proposed marquee is 26 ft. 3 3/4inches, which is still not as tall as the old Radio City sign that it is likely to be likened too. The marquee design also ties in to the wayfinding signage that was chosen for Downtown Ferndale in 2010.
“The Magic Bag has undergone a host of cosmetic improvements & equipment upgrades. And more enhancements are on the way. We’ll be posting pictures & talking about things to come on our social media outlets every Tuesday. Stay tuned. There’s some really exciting stuff in the works,” Littleton said.
Littleton said the project could not have been done without the help of Carey Denha and Phillips Sign & Lighting, both of whom are helping make this working concept a reality.
Ferndale’s Economic Development Director Derrek Delacourt said “I am happy with the investment made by the owner. The Magic Bag has always been an important and significant Ferndale. I feel the improvements to the sign are fantastic and we look forward to working with the owners going forward”
Check out the Magic Bag at http://www.themagicbag.com/. 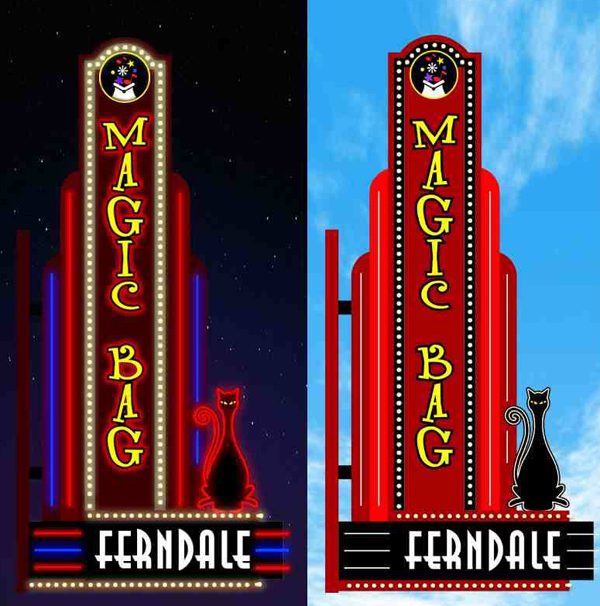