Denise Ilitch Shares Words of Wisdom at Women in

Communication Awards
(Crystal A. Proxmire, May 16, 2015)
The power of women coming together to support each other was strong on Thursday night as The Association for Women in Communications Detroit Chapter held their Annual Matrix Awards Celebration at the Community House in Birmingham.
Denise Ilitch, publisher of Ambassador Magazine, gave the keynote address as more than 100 professional women (and a spattering of supportive men) enjoyed a delicious

meal and listened to her advice.
Speaking as a woman who has been an attorney, an entrepreneur, a philanthropist, and a magazine publisher, Illitch shared what she called the three “C”s of success: Confidence, Courage and a Can-do attitude.
“Can do people believe everything is possible,” Ilitch said. A strong example for her has been the work of bringing people together for major development in Detroit. Negotiating with all the parties to building Comerica Park and Ford Field to make a unique and enticing sports destination was only possible because everyone came to the table with a “we can do this” mentality.
The creation of Ambassador Magazine was also an ambitious project. “Magazines have an 80% failure rate,” she said. Yet the need she saw for showcasing the upscale, optimistic side of the city

drew her in. “Ambassador is all positive,” she said. “People look at the magazine and they see all the parties and the stories and they say ‘wow, this is all in Detroit?’ And I say ‘yes it is.”
Although Ilitch came from a powerful family, she said that it was education and experience that built up her confidence to be successful in her pursuits. “There is a saying that behind every successful man there is a strong woman. Well behind every strong woman is herself,” Illitch said. “No matter where we come from, to do great things we need to have confidence in ourselves.”
The women who won 2015 Matrix Awards also share those three traits.
Marilyn Trent is the owner of the marketing and design company Trent Creative based in

Rochester. In addition to winning multiple awards for her marketing work, Trent is active in making her community better as the co-founder of the Green City Committee and helping to organize Rochester’s first Michigan Earth Day Festival. She was recognized with the group’s Headliner Award, which salutes a chapter member for outstanding personal and professional achievement. Learn more about Trent Creative at www.trentdesign.net.
The Vanguard Award was given to Emily Hay of Hay There Social Media. The award recognizes a member for innovatively using a communications medium during the past year. Based in Birmingham, Hay There Social Media provides an online video program to help parents and educators teach young people about how to become smart digital citizens. Her unique “Tweet Team” concept also serves her clients with their expert social media skills. Learn more about Hay There Social Media at

www.haytheresocialmedia.com.
Documentary Producer Keith Famie took home the Diamond Award, which is for portraying women positively in the media. His recent documentary “The Embrace of Aging, the Female Perspective of Growing Old” is a 13-episode series that debuted on Detroit Public Television in October 2014. Famie is also known for his culinary prowess, including as host of “Keith Famie’s Adventures” on the Food Network. But his real passion is making films, he said. Check out the series at www.embraceofaging.com.
The purposes of the Women in Communications Detroit Chapter are: To unite members for the purpose of promoting the advancement of women in all fields of communications, to work for the First Amendment rights and responsibilities of communicators, to recognize distinguished professional communications achievements, and to promote high professional standards throughout the communications industry. Learn more at www.womcomdetroit.org. 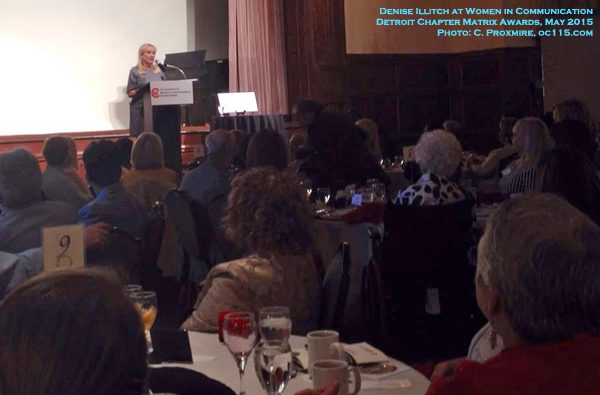