Pontiac Voters to Decide on New City Charter, Election May 5

Pontiac Voters to Decide on

New City Charter, Election May 5
(Crystal A. Proxmire, May 2, 2015)
The last time the City Charter for Pontiac was revised, the year was 1981. Since that time, the City has seen many changes including years with an emergency financial manager, the dismantling of the police, fire and water departments, over 85% reduction in employees, and widespread financial loss as the auto industry started doing more manufacturing elsewhere. In those years there have also been political challenges, and the loss of iconic attractions like the Detroit Lions, the Pontiac Silverdome, and the Phoenix Center.

In short, the City has been through a lot. But dedicated residents continue to face the challenges and work towards the idea of #PhoenixRising. Part of the City’s comeback hinges on the local government’s ability to respond to the needs of the people. That is why the Charter Revision Commission was formed. And it is why Pontiac voters will have the chance to vote on Tuesday if they would like a new Charter in place or not.
“Each city is required to have a charter,” explained Charter Commission member Mike McGuinness. “The City Charter is the governing framework for the municipalities. It’s akin to the Constitution for the City. It sets the broad parameters for how the government operates, and how City leadership is determined.”

The Commission was created by a vote of the people in 2012 and nine Commissioners were voted in to serve. Mayor Deirdre Waterman was part of the Commission until she had to resign when when she was elected Mayor. McGuinness was appointed by Council in 2013 to fill the space. Darryl Fowlkes is the Chair and Attorney Peter Letzmann serves as the legal counsel. Other Commissioners are:Roland Elam, Co-Chairperson, Bruce Turpin, Secretary, Yvette Carson, Roland Elam, Gloria Harris-Ford, Wilburt McAdams, Evelyn LeDuff and Willia Mae Wright.
“The charter has not been revised since 1981, and as a result it is outdated and isn’t as effective a vehicle for governing,” McGuinness said.
Some outdated provisions include how police and fire departments are managed, and

instructions for the operation of a city-run hospital that no longer exists. The new wording allows city leaders to provide essential services but without the same constraints. For example, the charter would permit the outsourcing of police and fire as they are doing currently.
“The new Charter also has reforms to prevent mismanagement and malfeasance,” McGuinness said. “The entire document is 46 page long with 9 articles. The 7th article is ethical standards. This is a completely new article modeled after other cities.” The article prevents nepotism, calls on officials to be open about potential conflicts of interest, and requires lobbyist disclosure.
It also calls for more frequent reporting of city finances and more public deliberation on the budget process. “The way it works is the Mayor presents the budget for council to discuss and vote. In the past there was this sense there was gamesmanship, where the Mayor would wait until the very last minute before letting Council members know what was going on. This meant

there wasn’t time for discussion or changes. We’ve added monthly and quarterly reporting requirements to the Council, and by extension to the public.” There is also a requirement that any payment must have two signatures on it.
Fowlkes, who is the former Fire Marshal for Pontiac, said “We put a lot in there to have more fiscal responsibility and government checks and balances, so we don’t get into the things we got into last time.”
The structure of local government is also important in making sure that all residents have a voice. Currently there are seven members of Council, each elected from their own district. Under the new Charter, there would be five districts and two Councilpersons elected “at-large,” meaning with a city-wide vote. The Mayor’s office would continue to be at large. The four-year terms would all be up at the same time.
The new Charter also increases the required number of signatures for a candidate to be on the ballot. Currently an interested City Council candidate must get 25 signatures, and a Mayoral

candidate must get 150. Under the new Charter, it would be 50 for City Council and 250 for Mayor.
“The Commission spent nearly years looking at this line by line, and coming up with ways to make the local government more responsive to the people,” McGuinness said. The Attorney General of Michigan also reviewed the document to make sure that it met the approval of the State before putting the question on the ballot. If passed, it would take effect on Jan. 1, 2016.
The election is Tuesday, May 5, 2015. Voters in the Pontiac School District will also be asked to approve a millage to make necessary repairs to school buildings. Learn more about the school bond at https://oaklandcounty115.com/2015/03/31/pontiac-schools-seeking-millage-for-facility-repairs-vote-is-may-5/.
View the current (1981) City Charter at http://www.pontiac.mi.us/council/city_documents/docs/citycharterwithamendments.pdf.
View the proposed City Charter at http://www.pontiac.mi.us/mayor/boards_and_commissions/docs/citycharterfinal.pdf.
There is also a Facebook Group for the Commission at https://www.facebook.com/pages/2012-2015-City-of-Pontiac-Charter-Revision-Commission-Community-Forum. 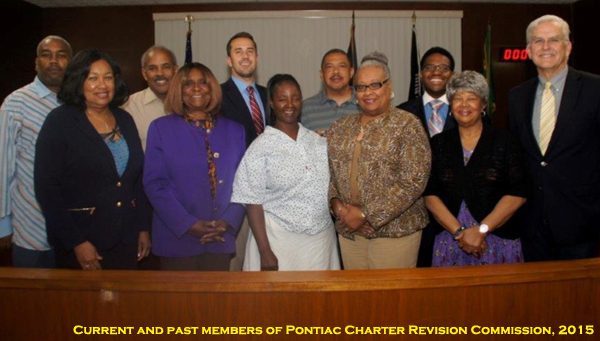