Services
(Crystal A. Proxmire, March 21, 2015)
With red shirts and yellow signs, members of UAW, AFSCME, and FAES/FEA marched back and forth in front of the Ferndale Schools Administrative Building on March 16 in protest of the School Board’s decision to get proposals to privatize maintenance in the district.
Bus driver Laurie Johnson addressed the board during open comment, focusing on a specific date: July 1, 2015.
This is the date that unions who made concessions during the last round of major budget cuts were scheduled to have their pay restored to pre-2014 levels. It’s also the date they could now lose their jobs to outside contractors.  The bus drivers are not being considered for this round of

outsourcing, however all of the unions are supporting each other.
“This is the date we were supposed to be made whole,” Johnson said. She spoke of the changes over the years, with her union going from 82 members in 2005 to 44 in 2014. With wages going from $18 per hour to $10.50 and the elimination of higher-paid categories though the work still had to be done. She also lost medical coverage for families, with only employees themselves now being covered. “They asked us to ‘invest in the future of Ferndale Schools,” she said. “And now they want to get rid of us.”
John Hartkopf, President of ASCME Local 160, talked about the increased workloads placed on remaining workers, and noted that the City of Ferndale has shifted from hiring outside companies to investing in employees.
Another person spoke of the importance of having consistent adults around the children. “We

are in their lives on a daily basis…tying shoes…giving them a high five in the hallway… It’s not just cleaning, it’s a personal connection,” she said. The staff “is like family,” she said, “We have members with 20-30 years of their lives dedicated to this district, what about the impact to them?”
Speaking from the picket line, Sherry Cole said she’d been with the district for 28 years and was two years shy of retirement. “If they privatize and I go with the company, I lose $500 a month and I lose my retirement until I am 60. Cole had been a cook at Coolidge before the lunch program was privatized. She now does custodial at Harding. “They make it seem like it’s something to be able to go work for the new company. Who wants that? We get first shot at worse jobs with no benefits.”
The School Board voted on Feb. 9 to seek bids for contracting out custodial services.

Superintendent Blake Prewitt said outsourcing would save Ferndale Schools $900,000. In looking at other districts through Oakland County, only two districts have higher paid custodial staffs – Madison and Hazel Park. He said Ferndale and these other districts spend over a $1 million more per year than districts even of larger size.
In response to the concerns of the current employees, Prewitt said “Due to the lack of state funding for schools, Ferndale, as well as majority of Oakland County schools, have had to move to outsourcing in order to balance our budgets. Ferndale is the second highest in custodial/maintenance spending in the county, while being the second lowest in instructional (classroom) spending. Our benchmarking shows that we could have at least a half million dollar savings through this process. This is equivalent to 5 or 6 classroom teachers. This is the difference between class sizes in the 20’s or 30’s. I wish the state would fund schools properly,

then we would never have to look at these options, but we have to look at ways to put more money into the classroom.”
Board President Jim O’Donnell added “The Board will approach this decision with great care. We have to find ways to put more money in the classroom, while also ensuring high standards for all educational support services. Above all, we will consider the impact of this issue on all the district’s stakeholders.”
The District is also going through a restructuring process, where combing students into fewer buildings is expected to save money and improve programming.
The School Board is expected to vote on April 20. They are considering RFPs as well as 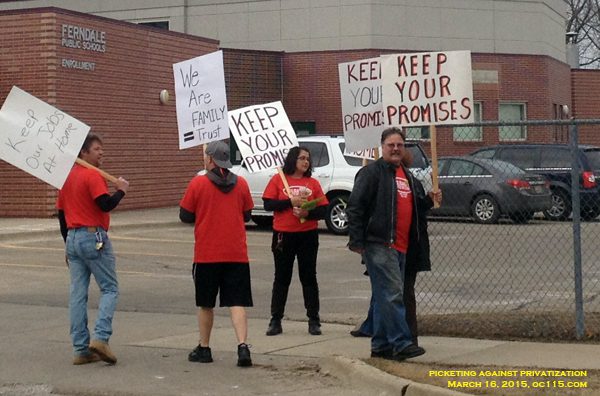