Spirit Sales in Restaurants on the May Ballot

for Oak Park Voters
(Cheryl Weiss, March 10, 2015)
On May 5, voters in Oak Park will decide if the sale of spirits and mixed drinks in restaurants will be permitted in the city.
If Proposal 2 is approved by the voters, the same restrictions will be in place for Class C liquor licenses as for Tavern Licenses.
Two years ago, the Oak Park City Council passed the Tavern License ordinance, allowing restaurants to sell beer and wine, with very restrictive provisions. In order to qualify for a

tavern license, the restaurant must be 500 feet from any school, park, or place of worship. The establishment must have at least 50 seats, at least 10 food items, income from alcohol sales is limited to half of total sales, and no alcohol can be sold after midnight. Up to 20 restaurants are allowed tavern licenses in Oak Park and at this time only two restaurants have obtained a tavern license: Sahara and Jade Palace, both at 10 Mile and Coolidge.
The ballot question states: “Shall the sale of spirits and mixed spirit drinks in addition to beer and wine be permitted for consumption on the premises within the City of Oak Park under the provision of the law governing same?”
This issue was placed on the ballot following a grassroots campaign by Sahara co-owner Zeana Attisha and her campaign manager, Skip Mongo. In order for this to become an issue for the voters to decide, 3,500 signatures were needed; they submitted 5,500 signatures. “People

signed, they wanted this.
People understand this city can’t survive on property taxes alone,” he said. Mongo went on to say, “If you do your research, the top 10 cities serve liquor. Most people go to Berkley, Ferndale, or Royal Oak instead of Oak Park. We don’t have a shopping mall. We don’t have a walkable community. They [other cities] have the entertainment.”
Mayor Marian McClellan agrees. “Because surrounding communities welcome restaurants that serve spirits, Oak Park has been at an economic development disadvantage for decades. Now we have an active Economic Development Department Director, Kimberly Marrone, who is functioning with one arm tied behind her back because businesses she is courting choose to locate in other cities. Restaurants often trigger the growth of economic development in cities. Royal

Oak started growing when a chef opened a good restaurant on Main Street. We want to promote vitality in our business community, and passing Proposition 2 will give us that opportunity.”
City Manager Erik Tungate explained the benefits to Oak Park if Proposition 2 passes.   “Allowing restaurants to serve liquor and provide more choices to their dining patrons will open up the possibility that as many as 20 new restaurants, all with strict liquor licensing guidelines, will land in our community. More successful businesses create more vibrant business districts and raise property values across the board.”
Attisha believes that with Proposition 2, more restaurants will choose to open in Oak Park, including family friendly places.  She would relish another restaurant in the 10 Mile and Coolidge

location. “Restaurants seem to be approved together, as in Ferndale and Royal Oak. That’s actually good for business; it’s a destination. Sahara is now a landmark; people know to come to us.”   To make Oak Park a destination, however, more restaurants are needed, and most restaurants require a Class C liquor license as part of their business plan.
Attisha and Mongo remember at least two restaurants that were planning to open in Oak Park, but chose other cities because Oak Park was a dry city. With the passage of Proposition 2, Attisha believes restaurants will come. She is also hoping for a restaurant her children would enjoy, such as a Chuck E. Cheese, which also serves alcohol to parents.
As in Ferndale, a mix of restaurants as well as shopping would bring more people to Oak Park on a regular basis. Tungate added, “With this tool in my hand, my staff and I can recruit new

restaurants to the city that would have otherwise gone elsewhere due to the lack of freedom to institute their respective business models at a location in Oak Park.”
Mayor McClellan agrees. “We are looking to attract family centered national chains like Applebee’s, and locally owned quality restaurants and bistros,” Mayor McClellan said. “When Oak Park City Council passed the Tavern License ordinance, the Council put very restrictive provisions in it to protect the family centered nature of our community The ordinance prohibits bars, topless bars, strip clubs, and night clubs to avoid problems, “ she explained.
“Our Public Safety Department is squarely behind the city on this topic. Sahara and Jade Palace have had tavern licenses for a year, and there have been no public safety problems,” stated Mayor McClellan.
A long-time business owner, Attisha has spent a great deal of time working on obtaining of Class C liquor licenses in Oak Park. She and her husband first opened a restaurant on 9 Mile in Oak

Park in the 1980’s. In 2010, there was a fire, and they needed to look for another location. They considered going to Royal Oak or Birmingham, but they love being in Oak Park, which she considers “the center of everything.” Then an opportunity came up and space became available in the former Blockbuster Video and Metro PCS stores, which is now Sahara. At the time, Attisha remembers, Farm Fresh supermarket was falling apart. Public safety officers were being laid off, and much was changing in the city. It made sense to leave Oak Park, yet they chose to stay. However, they knew they needed to be able to sell drinks with dinner, and Oak Park was a dry city.
She went to Oakland County to get ballots and collect signatures, and found out that tavern licenses could be approved by City Council. She talked with the Mayor and City Council, and in 2013, the City Council approved tavern licenses, which allowed restaurants to serve beer and

wine. Sahara got their tavern license on May 5, 2014.   Oak Park voters will decide if Class C liquor licenses will be permitted exactly one year later, on May 5, 2015.
Attisha and Mongo plan to continue and grow their grassroots campaign. They will contact the 5,500 people who signed the petition, attend town hall meetings, educate people about how this issue will help move the city forward, and motivate people, focusing on getting out the vote. “A city can’t live on property taxes alone. We need to be creative and figure out how we can get revenue,” she stated.

When asked if she had a message about this issue for Oak Park residents, Mayor McClellan said, “It’s time to move Oak Park forward, and for this we need your help.”
Oak Park city staff will hold several Town Hall meetings before the May 5th election to answer any questions residents may have on this issue.
Cheryl Weiss is a freelance writer from Oak Park. Please visit her blog at https:///oakparkconnections.wordpress.com
Previous stories:
https://oaklandcounty115.com/2013/07/16/oak-park-votes-to-allow-beer-and-wine-in-restaurants/
https://oaklandcounty115.com/2012/12/08/thirsty-for-change-could-oak-parks-dry-days-be-numbered/ 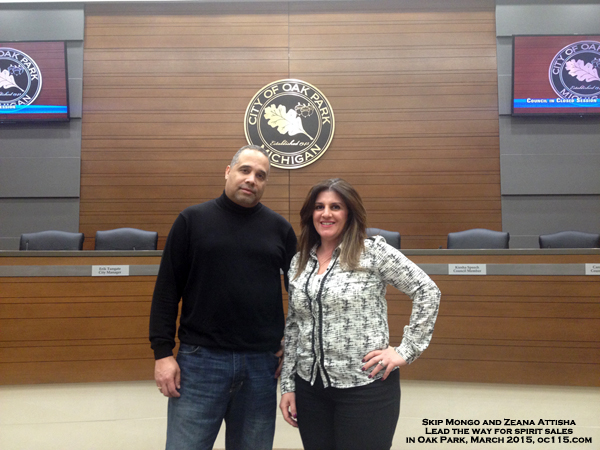