Ferndale Voters to Decide on Funding for Roads, Parks and City Services

Ferndale Voters to Decide on

Funding for Roads, Parks and City Services
(Crystal A. Proxmire, Feb. 10, 2015)
The May 5, 2015 ballot will not only have a state wide sales tax increase proposed, but two local proposals as well for voters in Ferndale.
One will be a millage to continue funding City Services, and the other will be for roads and parks. Both would become active as previous funding mechanisms expire, so voters would be paying roughly what they are currently in taxes.
Headlee Override

Because of the way state laws work (the combination of the Headlee Amendment of 1978 and Proposal A of 1994), the amount of taxes collected on a home do not rise in proportion to increases in property values. Therefore there are systematic limitations that require many cities to go to voters to ask for the tax money needed to keep the City functioning. The City provides services to residents that are paid for with tax revenue from the general fund, such as police and fire protection, keeping roads plowed, street lights, park maintenance, city clerk functions, building inspections and permits, staff etc.  Other services have their own funds
In 2011voters approved 5.4 mills for five years. This money helped the city stay afloat in an era of recovery from the fall of home values, though every year the city had to get more and more lean with budgeting. In this time Ferndale saw changes in leadership that resulted in increases in development in Ferndale and efficiencies in City administration. Among the most notable is the

fact that with strategic hiring and equipment purchases, the DPW and Parks and Recreation has saved over $600,000 since Director Loyd Cureton’s arrival. Bringing on a Human Resources Director has saved the city $165,00 a year in labor costs and healthcare costs once related to collective bargaining struggles, and a plan offering early retirement to police and bring in new officers will also bring savings moving forward. The recent remodel of City Hall, the Police Station and the Courthouse also brings increased efficiency and the need for less staff, though the construction itself did not come from the City’s general fund, but from years of saving part of every traffic ticket to go towards the project. There was also more savings and efficiency in bringing in an outside company for financial management.
The efficiencies and savings have kept the city treading water so to speak, even as revenue

continued to decline. Because of limits placed by the state on property tax increases, even as property values go up, the City still takes in $317,000 less per year than it did even in 2011.
So now the City is asking the public if they would like to keep treading water by continuing the 5.4 mill Headlee override, or if they would prefer to face a $2.6 million budget shortfall. The cost for a homeowner of a $75,000 taxable valued property would pay $409 a year, as they are currently.
“Thankfully Ferndale is a community that supports City services. They understand the problems in Lansing and know that Ferndale continues to do great things in spite of the economic challenges we face,” Coulter said. “The reason we are asking for ten years instead of five is because we know these problems are not going away any time soon. The system is broken.”

For more info on the Headlee over-ride, download the presentation to Council at http://ferndale-mi.granicus.com/MetaViewer.php?view_id=3&clip_id=498&meta_id=45145.
Parks and Roads – Infrastructure Bond
While the millage vote is essentially a renewal, the bond for fixing parks and roads is actually slightly

less expensive than the bond debt that is retiring in 2016. For a homeowner with a taxable value of $75,000, the cost for this bond would be $82 less a year than they are currently paying for the 1994 bond going from $489 a year to $407 a year.
The 1994 road bond helped revitalize Downtown Ferndale as well as gave the community nice streets. However the roads are starting to show their wear, with the majority of streets in fair to poor condition.
The City is asking voter to continue funding roads, and a little bit of the total going to fund park improvements. Of the $45 million they are asking for $43.1 million would go for road repairs and maintenance.

That leaves $1.9 million for a splash pad, walking paths and new playground equipment.
“I’m excited about the organic energy with our parks to this point,” said acting City Manager Joe Gacioch. Citizens volunteering on a Blue Ribbon Parks Committee evaluated the parks and conducted a survey of resident’s wishes. A splash pad ranked high on the list (as did a dog park which is already being implemented).
“We need to be clear, the vast majority of this bond is for the roads,” Gacioch said. “But we can

use this opportunity to improve the quality of life for residents by responding to what they want to see in their community.”
As far as the roads, Gacioch listed the benefits of having road funds. “Poor roads are aligned with communities in decline,” he said. “There is vehicle wear and tear, and increased hazards. Good roads increase property values and community image.”
He said that ignoring deteriorating road conditions “is to delay the inevitable” in terms of needed repairs.
For more info on the bond proposal, download the presentation to Council at http://ferndale-mi.granicus.com/MetaViewer.php?view_id=3&clip_id=498&meta_id=45143.
For more information on the state laws that impact municipal finance, see this Michigan Municipal League report: https://www.mml.org/advocacy/resources/system_failure_executive_summary.pdf. 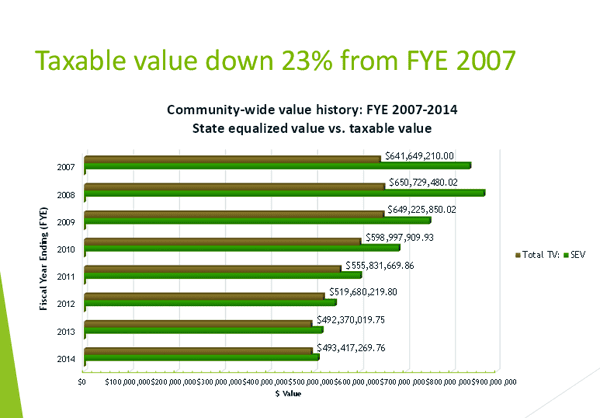 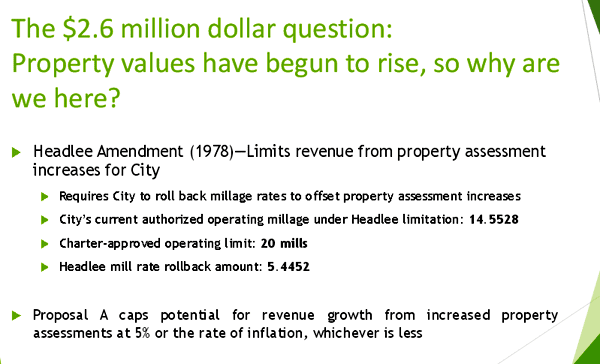 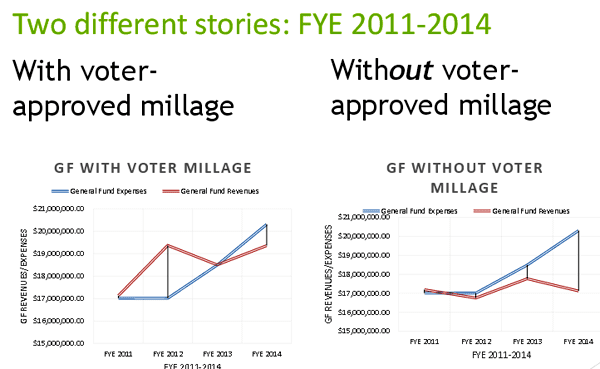 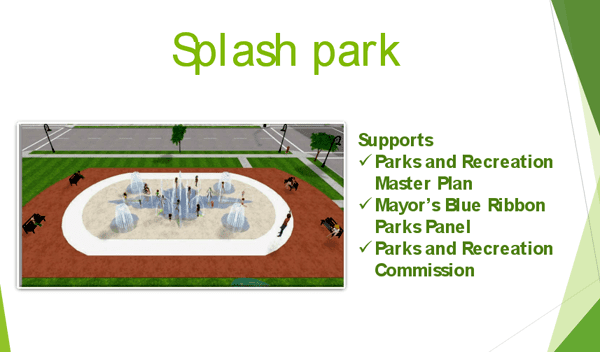 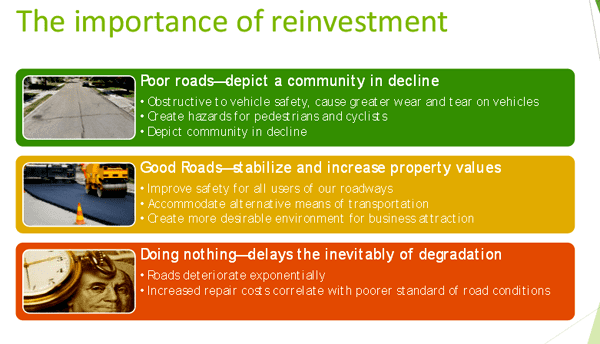