Trees, Poles and Rust Belt Railing Places to Give Free Scarves in Ferndale

Railing Places to Give Free Scarves in Ferndale
(Crystal A. Proxmire, Feb. 1, 2015)
Ferndale has joined in the trend of leaving free scarves around town for people who may be cold. Whether it’s picked up by an under-dressed teenager, a homeless person, or someone walking who lost theirs –  scarves tied to trees, poles and bus stops can provide a welcome surprise for those in need.
Ferndale’s free scarf initiative began in the Facebook group Ferndale Forum, with Kara Nickell and Jodi Knittel leading the charge to collect and distribute scarves around town. On Jan. 31 they collected scarves at Rosie O’Gradys, tagged them,

and tied them around Downtown Ferndale. Members of the forum dropped off scarves and Madeline and Sophie Knopf even stopped in to help with the process. People who happened to be eating at the restaurant at the time also chipped in cash so Nickell could buy more scarves.
Yellow tags safety-pinned to the scarves let people know the scarves are free to take.
They even coordinated with Rust Belt co-owner Chris Best to keep the momentum going. The Rust Belt sits on the corner of 9 Mile and Woodward, right between two main bus stops. Best is having a sign made and encouraging people to bring scarves to tie on any time they would like. People can also drop off scarves any time at Rosie O’Grady’s, where Nickell works, and those will be tagged and left

around town as well. Or people can just leave them around on their own, but pinning a note on them helps people to know they aren’t just lost.
“We’ve been so blessed,” said Nickell of herself and her boyfriend who owns Rosie O’Grady’s. “We have a roof over our heads, family that cares about us, lots of love and support. I get to be warm. Other people deserve that, and this is a way to start.”
When asked if she was worried about people taking the scarves who did not need them, Knittel said “They’re for anybody. Maybe someone takes it just because they

think it’s neat, but then when they’re wearing it just the feeling of wearing something nice they found makes them happy and in the mood to do something nice for someone later on. I’m all about paying it forward, and I believe people do that.”
Knittel is the President of the Ferndale Rotary and has created a Red Tent initiative that donates feminine hygiene products to homeless shelters. Nickell and Kramer have recently begun helping a local homeless man named Lucky get back on his feet. “It’s been life changing for him, and for us,” Nickell said.
Their hope is that the scarf distribution will catch on once people get the idea to do it. Bus stops are great places, as well as in front of the Rust Belt. “This is what we’re known for right? Neighbors looking out for each other. It’s just Ferndale Normal,” Best said. 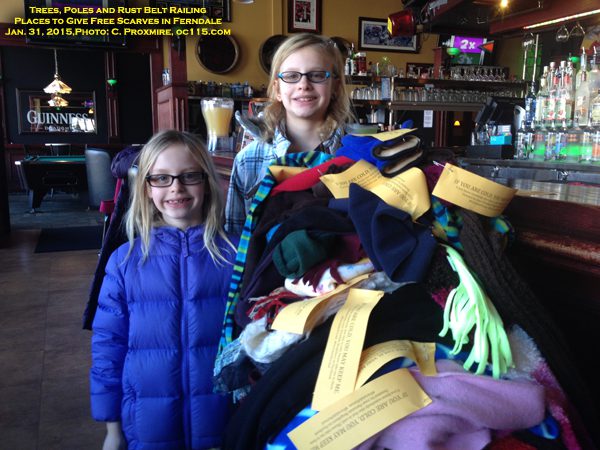 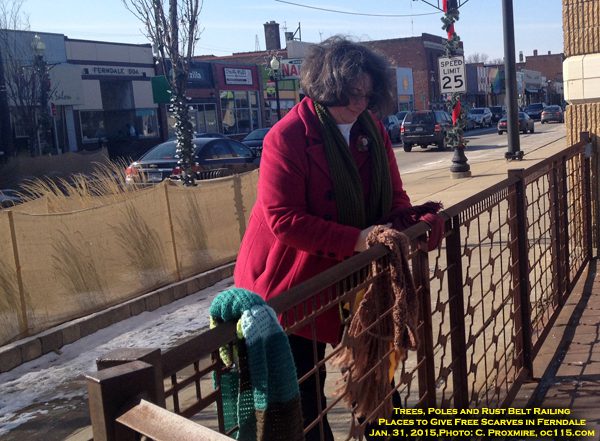 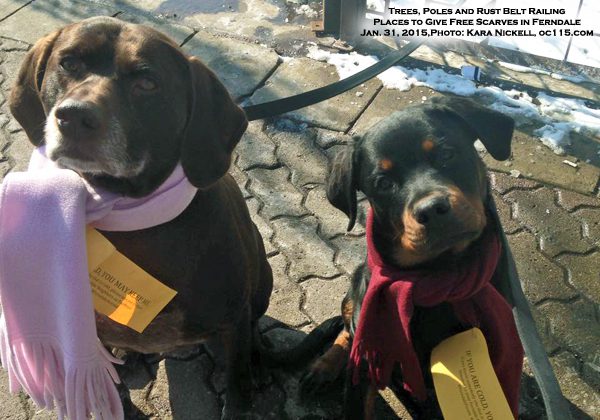 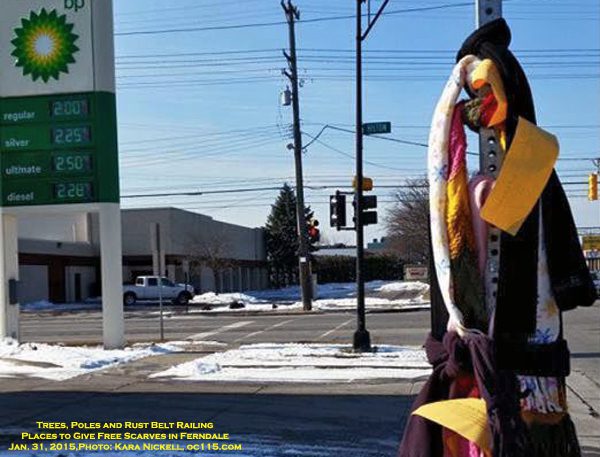 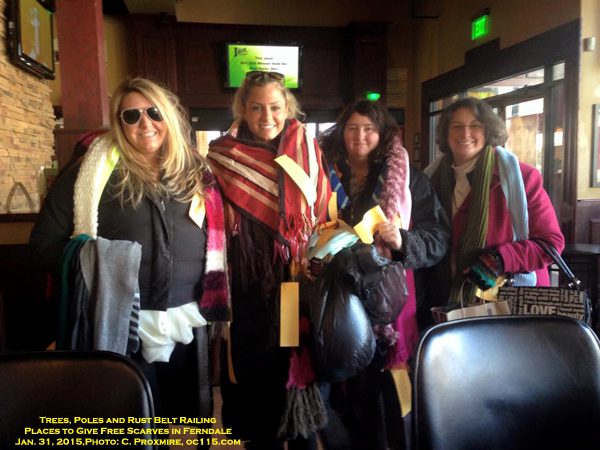 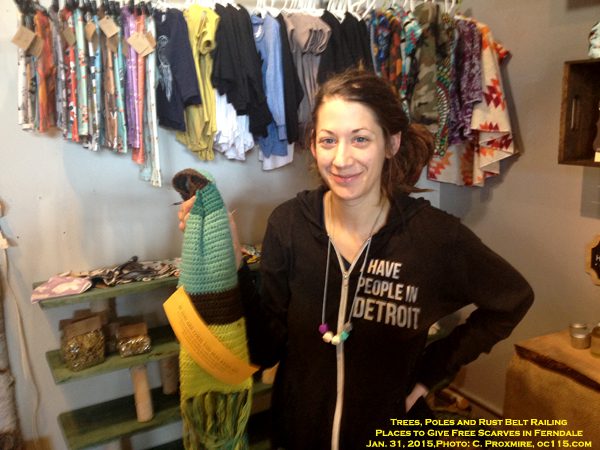 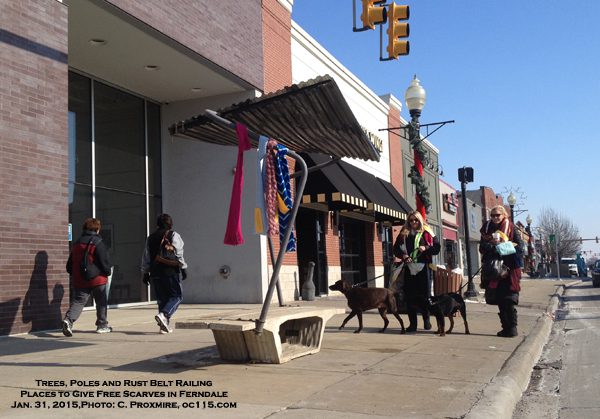 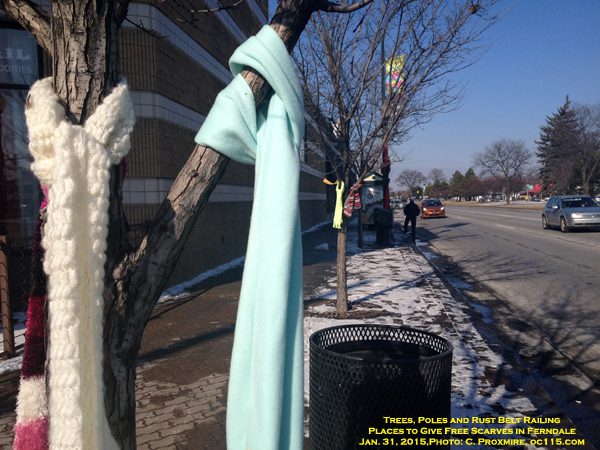 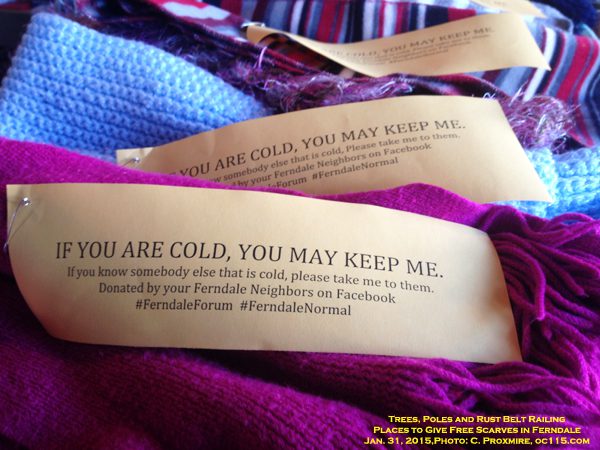 To participate, drop off scarves at Rosie’s or the Rust Belt and they can tag them and distribute.  Or leave them directly on the railing of the Rust Belt, or in places near local bus stops.  This is a project catching on across the country, and is not limited to Ferndale.