(Cheryl Weiss,  Photography: Marian McClellan Jan. 23, 2015)
“What you celebrate, you attract, “declared Nic South, principal of the Oak Park Preparatory Academy, at the Dr. Martin Luther King, Jr. celebration on January 19, 2015. Students, parents, staff members, administrators, elected officials, and community members gathered to not only honor Dr. King, but to reflect on what each person can do, individually and collectively, to keep Dr King’s work alive and growing stronger.
The program began with everyone joining together to sing the Star Spangled Banner and “Lift Every Voice and Sing”. Then, the combined elementary school choir sang “Free At Last”. The big

smiles on the little children’s faces, the hand motions along with their voices, and their increased energy when singing the chorus was heartwarming.
Marian McClellan, mayor of Oak Park, spoke about the importance of each person voting.   “To honor the memory of Martin Luther King, promise yourself to register to vote…your voice needs to be heard.” She reminded the audience that although it is easy to think our vote does not matter, it does. From funding physical education classes in schools to helping parents find jobs to supporting grandparents with their needs, election results have an impact on our daily lives. “We need to elect people who care about what we care about.   If you’re not at the table when it’s time to vote, you are on the menu, ” McClellan stated.
The Oak Park Voices of Inspiration, comprised of talented students from the Oak Park

Preparatory Institute and the Oak Park Freshman Institute, sang “You Gotta Be” and “Yes You Can”, affirming the theme of each person doing their part to contribute to keeping Dr. King’s alive and growing.
State Representative Robert Wittenberg addressed the audience, saying, “Today is all about service,   to each other and to the community. To do better and to be better, to make our community a better place.” He was raised to volunteer, and he continues to volunteer today for organizations in the area, making a difference and doing his part. He shared that Dr. Martin Luther King, Jr. inspired him to follow a career in service, and to work hard for his goals. When Wittenberg decided to run for State Representative, many people tried to discourage him, saying he was too young and did not have enough experience yet. However, he believed in his goal to

serve his community as State Representative, he worked hard, and he won the election. He pledged to fight to make this community a better place than it is today, and to work hard every day to serve everyone in his district. “Set your goals high, work hard, play by the rules, and you will achieve,” he encouraged the audience. He then gave everyone a challenge: What can you do today? What can each of us do today, and every day, to help and to serve? “Little things add up to big change. Together, we can be great!” Wittenberg said.
One of the most impressive presentations of the day came from the Step Team, a group of young men from Einstein, Key, and Pepper Elementary Schools. In unison, they stepped, danced, and demonstrated outstanding talent as well as remarkable confidence. The commitment, hours of practice, discipline, and dedication was unmistakable as these young men offered an

energetic performance, directed by Mr. Nathaniel Williams.
Ms. Lorna J. Wilson, author of Black Butterfly, read her poems “The Power of One” and “The Art of Giving”, affirming the power of each person doing what you can, individually and collectively.
One of the most inspiring aspects of Oak Park’s celebration is that they included students at all grade levels, as well as staff members. From tiny kindergarteners from the 3D Dance Academy at Einstein with the girls in full tutus and gold leotards and the little boy in a gold and white suit, dancing to “Who Would Imagine A King” to the Oak Park High School Jazz Band, Marching Band, and Praise Team, each school had a part in the celebration. The staff also took part in the program, demonstrating the skills they teach their students every day. Choral

Director Ms. Demetria Washington was a soloist in the Oak Park High School Marching Band’s “Praise is What I Do”, entering the stage from the side with a powerful voice that touched the heart of the audience. Mr. Kenneth Gill, Director of the Jazz Band, not only led the band in their presentation; he played a solo. As he played, a family feeling among the band was evident. The support and respect the students have for Mr. Gill was evident in their eyes as they watched him play. Each person shared their talents, doing what they can, individually and collectively.
An unplanned demonstration of this theme happened during the program. Two Pepper Elementary students were selected to share their favorite quote by Dr. Martin Luther King, Jr, and explain what it means to them. The first student, Chandler Wourman-Townsend, came out and confidently presented her prepared speech. A young man, Ibrahim-Said Ryan Toure was next. He chose “The Measure of a Man”, and after the first words, forgot the rest of his speech.

How many of us have done that at some point in our lives? As the audience waited, sending him encouraging words and applause, Ibrahim tried to remember, but ended up in tears at the podium. Immediately, Mr. Emanuel Haley, the principal of Pepper School, went to Ibrahim’s side, embraced him, and comforted him. Mr. Haley’s compassion, kindness, and caring heart shone through this unexpected situation.   He shared with the audience that Ibrahim had inadvertently lost his speech in the snow, and was worried that he would forget the words, but promised Mr. Haley he would do his best. Ibrahim went off stage for a moment, spoke with Mr. Haley, then returned to the stage, and confidently recited every word of the quote and what it means to him perfectly, flawlessly. The support of his principal, the encouragement of the audience, and the strength Ibrahim possessed within him all worked together to help this young man shine. The quote he chose to share by Dr. King was,

“The ultimate measure of a man is not where he stands in moments of comfort and convenience, but where he stands at times of challenge and controversy.” In this situation, Mr. Haley showed what an outstanding man he is, and Ibrahim showed what an outstanding man he is becoming.
A traditional part of Oak Park’s annual Dr. Martin Luther King, Jr. celebration is the presentation of the Keeper of the Promise Award. This prestigious award is given to a staff member who has demonstrated outstanding dedication, leadership, community service, and commitment to students in the Oak Park School District. This year’s recipient was Charity Jones, Assistant Principal of Oak Park High School. She was described as hardworking, loyal, and honest. She is a devoted employee and gives countless hours to the Oak Park School District. Ms. Jones is a passionate leader who believes all students should have an equal opportunity to learn,

and makes sure all students are treated fairly. She consistently demonstrates a commitment to excellence, effective leadership, and a climate of growth. In her speech, Ms. Jones said, “The service I do is for students, but I do not do it alone. It takes all of us working together to make a difference in this world.”
Also check out our story from Royal Oak Township’s MLK Day Celeberation. Pontiac and Southfield are soon to come…
http://oaklandcounty115.com/2015/01/20/keeping-with-kings-dream-ro-twp-asks-whats-going-on-video/
For more event listings go to http://oaklandcounty115.com/events/
Want a daily list of headlines? Sign up at https://feedburner.google.com/fb/a/mailverify?uri=Oakland_County_115_News.
Cheryl Weiss is a freelance writer, a blogger, and a retired teacher from Oak Park. 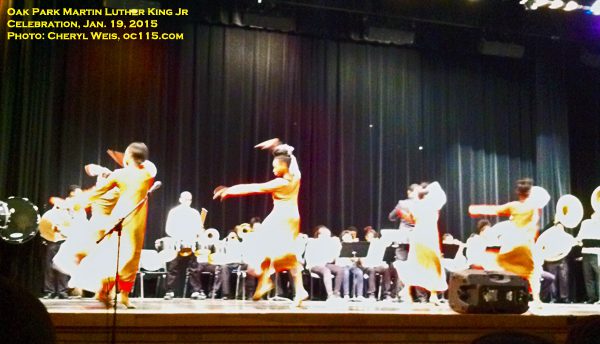 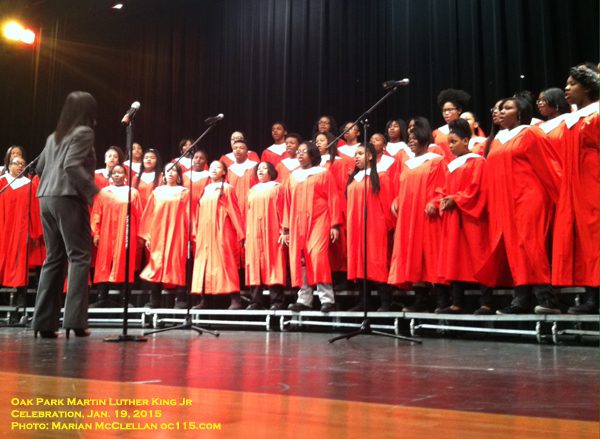 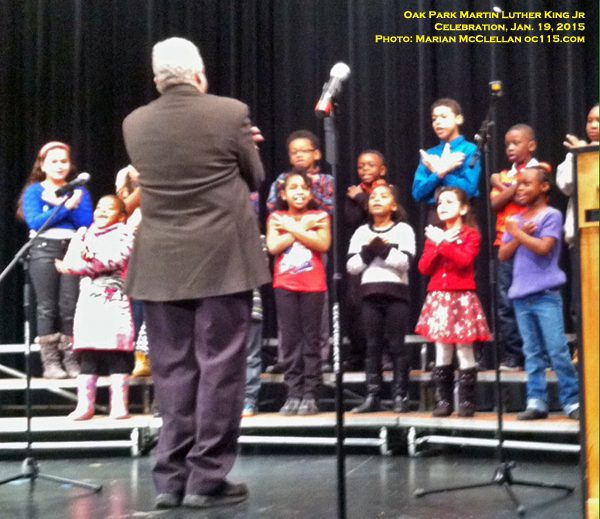