(Crystal A. Proxmire, Jan. 7, 2015)
After years of fighting for equality and inspiring others with his rainbow-painted storefront and endless fundraising help, the owner of Just 4 Us in Ferndale met with a battle that eventually took his life. Kevin Rogers died Sunday night after a fight with cancer at the age of 57.
“Kevin Rogers was one of the founding leaders of FANS of Ferndale, a gay residents association that was the first of its kind in Michigan. Founded in the mid 1990’s, it did the first sensitivity trainings

for the police dept. and founded events like the Ferndale Pub Crawl. FANS planted flowers, promoted pride, and held social events for the growing gay community. Kevin was a courageous leader of that group who also knew how to have fun. He helped create what we now take for granted, that Ferndale is a safe and welcoming place for GLBT people,” said Craig Covey.
He met his future business partner and friend JoAnn Willcock around 1999.  “After Ferndale city council passed a human rights ordinance in, a petition drive had it rescinded. I had a meeting at my house to have a vote on the ordinance. I had met Kevin before, but not had a lot of contact with him . He stood next to me as we discussed the campaign, and said, ‘I would co-chair the

campaign with you, but not alone.’ That was the beginning of a beautiful friendship,” Willcock said.  “It led to being business partners as well, but always more important to me was our friendship, which was and is so much more. I will miss him every day of my life. I love you, Kevin.”
Just 4 Us, a store catering to LGBT people and allies, providing movie rentals, gifts, reading material, clothing, pride swag and more, was a visible force in showcasing Ferndale as a welcoming community. Rogers bought the iconic store in 2004.  He continuously donated window space

to various causes, sacrificing his most prominent selling-space for the sake of charity. Many community meetings were held on the back patio.  Those coming to Ferndale looking for acceptance, guidance, or resources could turn to Rogers and his staff.
Ferndale Mayor Dave Coulter remembered Rogers fondly. “If Harvey Milk was the ‘Mayor of Castro,’ Kevin was our Mayor of Nine Mile. He was always quick with a hug or a smile, a listening ear and the latest scoop on what was happening downtown. He knew everybody and everything, and in fact I first learned the Dollar Castle was closing from him. But he shared these things not to gossip but from a

genuine love of the city, and it’s that authentic passion I will miss most,” Coulter said.
“He was a brother to me, who knew every method possible to make me laugh, I Love him and will miss him dearly,” said Francine Hachem.
“Kevin was a sweet gentle man whose smile would grow from ear to ear the minute he saw you coming, and he would stretch his arms out wide waiting to give you a great big bear hug. He is someone I will always remember, and I consider myself lucky to have known him,” Councilperson Greg Pawlica said.
D.C. O’Reilly was touched by Kevin’s generosity as well.  “I have known Kevin for years mainly through the store, it has been my Sunday morning ritual to read my paper there and to stop in

when I take my evening walks, after the flood last year I lost things, mainly furniture, Kevin was right there to help with offers of furniture.  When he was so sick last year I planted flowers in front and back of the shop and helped out behind the scenes at the Drayton Fundraiser.  Kevin always was an advocate for the community, when I was putting up posters for the fundraiser almost every store had a story about how Kevin was such a wonderful ambassador for 9 Mile Businesses’.  He provided for many years a safe space for GLBTQ people to gather without fear of harassment and we are a poorer community with his loss,” O’Reilly said.
Equality Michigan released a statement on Rogers’ passing, stating “Equality Michigan is tremendously sad to learn about the death of supporter, community activist, and owner of Just 4 Us bookstore – Kevin Rogers. He played a major role in developing Ferndale’s thriving LGBTQ

community. Kevin also made sure Just 4 Us played a supportive role in events like ComedyFest, Motor City Pride, Ferndale Pride, and elevated the profile of local LGBTQ organizations like Equality Michigan, Affirmations, and Ruth Ellis Center. The Equality Michigan team, and our predecessors, always enjoyed working with Kevin – and we will miss him dearly.”
Fellow business owner Dean Bach, proprietor of Dino’s Lounge and M-Brew, said “I will always remember Kevin as one of the very first Ferndalians to welcome me to the neighborhood. The kind spirit and witty warmth he showed me as the new kid on the block made me feel secure in jumping into the Ferndale “friendship pool” with both feet. Rest in peace Kevin. Today a new store opened on the 9 mile in the sky… And it’s probably called Just for Everybody!”
Brittany Turcotte said “I remember Kevin very fondly.  I started going to motor city pride at around 17. The first place I would go into would be just4us and I would run to him just to say

hello and see his face, which always made me smile. Over the years I would pop in not even on pride day and just go to see him and have a random conversation about any old thing and he always knew to have those delectable brownie bites for me by the time I got out of the door. Lol. They are my absolute favorite and if by chance they weren’t there he would offer me an Oreo smoothie or direct me to another business that might have what I was looking for. I’ve brought tons of friends in and out of that place especially to meet him and have a friendly warm genuine conversation with a friendly warm and genuine man. Over the past decade I learned a lot from him, shared laughs and I have fond memories. I just recently found out that just4us was closed and now I know why. I wish it was for another reason and I’m really sad that he’s gone. I last saw him around August of last year. He’s been a highlight of every year of mine for the past 10 years and he will be greatly and deeply missed.”

~~~ Celebration of Kevin’s Life Luncheon~~~
Continues at
Blumz Event Space
– 12 noon to 3p –
503 E Nile Mile Rd Ferndale, MI 48220
Feel Free to Bring a Bottle of Wine for our Wine Bar
Just4Us is now closed with the possible inventory liquidation starting next week.
If you have photos or stories of Kevin Rogers you would like to share, please contact CP at editor@oc115.com. 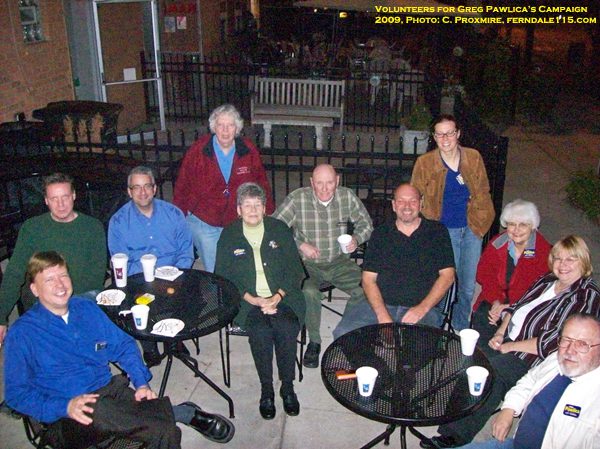