(Crystal A. Proxmire, Dec. 8, 2014)
NOTE: This story has been updated from its original version to include additional quotes from the property owner about the condition of the church.
As the teeth of the excavator dug into the facade of the former St. Paul’s United Methodist Church at E. 9 Mile and Bermuda, it did not take much effort to send the nearly century-old bricks and white-painted wood tumbling down to a pile of rubble.
The demolition permit was issued late last week, with city administration unable to deny the request because the church is private property, the city does not have any ordinances regulating historical properties, and the church was never registered as an historical property with the State of Michigan.

While many had hoped that the church could be saved and turned into a business that incorporated the church building, the owners

of the property said it was just not feasible.
Noah Dorfman of Northstar Properties said that he and his family had been hoping to find a use for the building that incorporated the structure and history, but that “the building is just too far gone.” Dorfman purchased the church in 2008 and for six years the prime piece of real estate went unused as he tried to find a way to keep the church building and adapt it to a more modern use. The church was built in 1920.
“We’ve taken maybe a hundred people in there over the years to look at it, for clubs or other businesses, but as soon as a structural or electrical engineer comes in they say it’s not worth it,” Dorfman said. “The building is obsolete. It was not taken care of well. When we purchased the property it was in shambles. To bring it up to code would cost much more than its worth.”
“The church

was in great disrepair when we got it.  The organ was never taken care of, the roof was rotted, the bathrooms didn’t work, the boiler didn’t work, and the windows were in horrible shape (most of them stuck in the position they were in for the last 50 years.)  We spent about $100k to make it into a safe workplace for a man who created concrete countertops, sinks and furniture.  That’s why people thought someone was working on it.  He was the only person whoever actually followed through and signed a lease and the most we could get for rent was $1500 based on the condition,” Dorfman said.
Dorman said that he bought the property after being approached by a group of Pastors that wanted to sell because they could not maintain it. After six years of being a financial drain, and no outside interest in purchasing it or partnering on a development, tearing it down made the most sense, he said.

“It’s really sad to me that most people don’t understand the economics and that their comments are pipe dreams. I know it was a sad day for a lot of people and I respect that.  I just think it’s a shame when people start spreading rumors or judgments without understanding the facts,” Dorfman said. “We all have wishes but we are going to work hard to create something with utility and beauty to fill the void and by the time it’s done it will look like it’s always been there.”
Dorfman and his family also own Lofts on the 9 and Torino, located directly across Bermuda Street. He said he is not sure what they are going to propose for the lot, only that they are taking things one step at a time.
Response to the demolition has been mixed, with some residents contemplating the possibilities and others upset at the loss of history. The City of Ferndale, the Downtown Development Authority and Ferndale

Historical Society had all tried to convince Dorfman to keep the building up and use that for whatever potential business Northstar Properties might develop.
The church hosted several congregations over the years The Ferndale Historical Society convened last week to release a statement, including that “The Ferndale Historical Society is deeply saddened and disappointed upon hearing the news that the very first church built in Ferndale, originally known as the Tabernacle, is scheduled to be demolished within the next week. It was our belief that the Church would not be demolished but re-purposed for another use, leaving the facade intact, based on published articles from February 2008, when the building was last purchased. We understand that after years of vacancy, the building would now require more of an investment the owner is willing to spend.
“The church has seen an illustrious history over the years starting with the purchase of land on the corner of

East Nine Mile and Bermuda Streets in 1917 where services were held in a one room wooden structure heated by a kerosene stove. The entrance faced Bermuda at the time. By 1920 the congregation had enough money to build the building which stands today and place the corner stone. There was no money left for a tower with a bell so the children of Ferndale put on a Minstrel show and raised enough money to build the tower and bell which completed the structure. The very first chapter of the Mid -West Red Cross was started in this church and troops marching off to WWI trained and did their exercises there.”
Members of the Society hope that the demolition can be used as a catalyst to get people interested in preserving historical elements of the city. Past attempts had been made to form an historical district or historical commission; however the debate between preservation and property-owner rights kept such discussions from moving forward.
“Over the decades, Ferndale has seen the loss of several very important historical buildings, not to mention

the altering of the facades of some of our best architecture this city has ever seen. Radio City Theatre at the corner of Woodward Withington was built in 1937 and demolished in 1975, Grand Truck Depot built in 1931 on East Nine Mile Road, and Lincoln High School on West Nine Mile Road was built in 1920 and razed in 1976 are all examples of deep rich architectural history the City of Ferndale has lost to new uninspiring development,” said the Historical Society statement “This is why it is so important for small cities like Ferndale to have a Historical Commission in place that can support the redevelopment of our old buildings and save our history. It is our hope that as we work with the City of Ferndale, we can continue to stress the importance of historical restoration to the investors, developers, and builders to ensure that we lose no more of what is left of the dreams that once built Ferndale.”
Dorfman had offered to sell the building to the Historical Society, but nothing ever came of it. He said he realized people would be upset at the demolition, but added
“Hopefully people will be confident. We’ve developed property that we maintain well and fits with Downtown Ferndale. We want to build something that will draw people to the east side of 9 Mile.”
Elements of the church, including the large carved brick with the church name on it, were donated to the Historical Society. The building came down on Monday, Dec. 8, 2014.
Previous story: http://oaklandcounty115.com/2014/12/03/first-church-built-in-ferndale-set-for-demolition/ 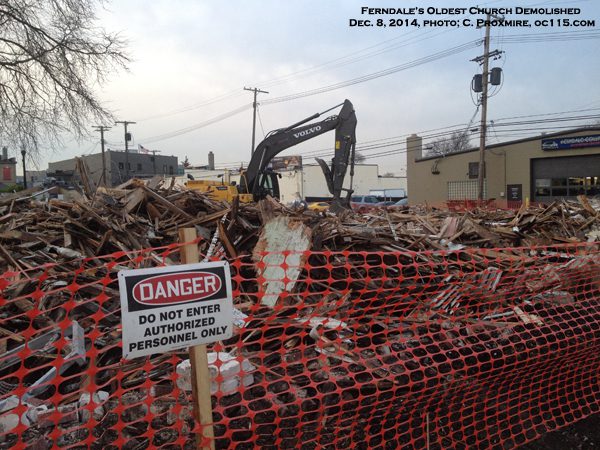 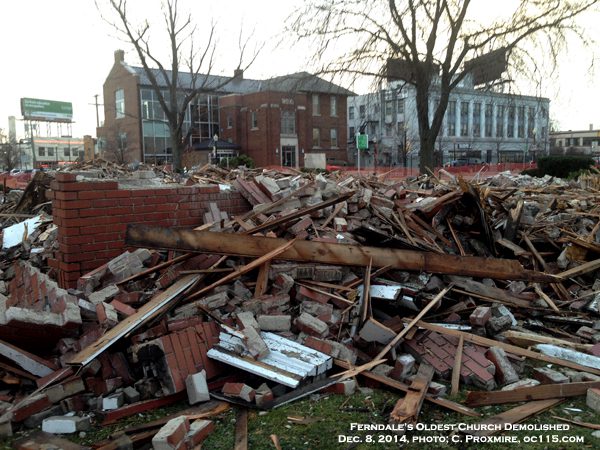 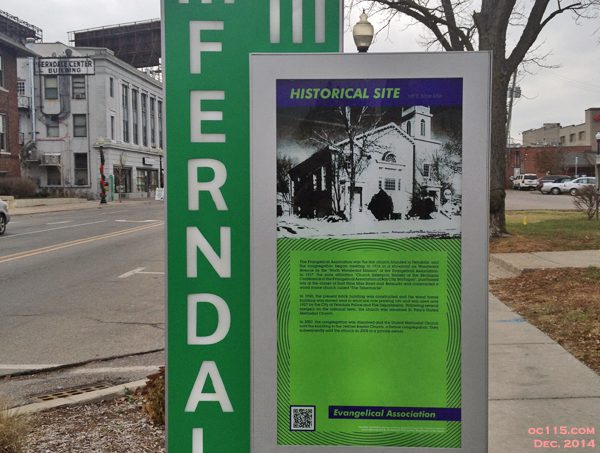 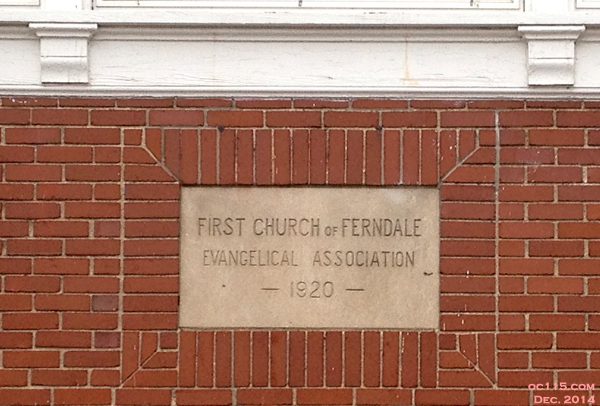 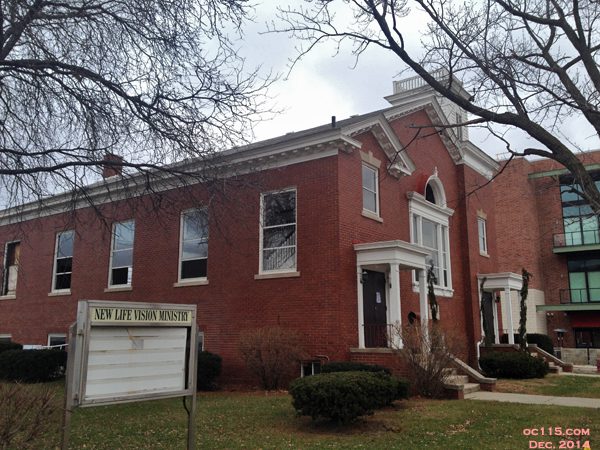 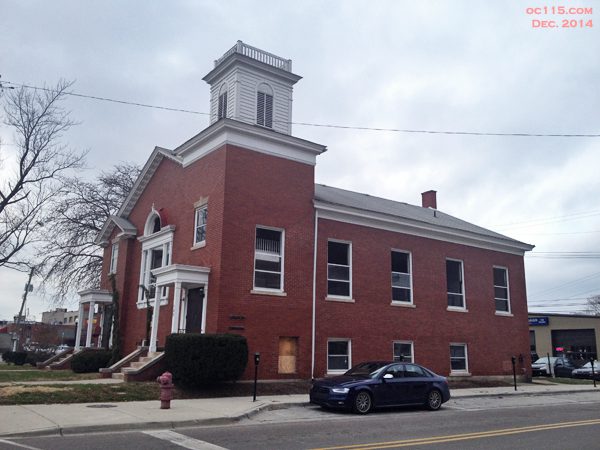 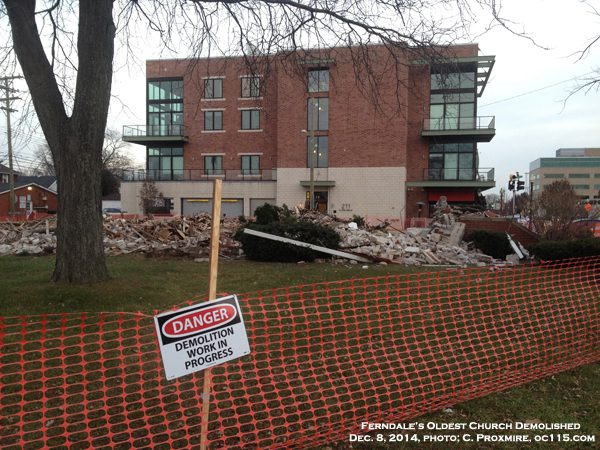 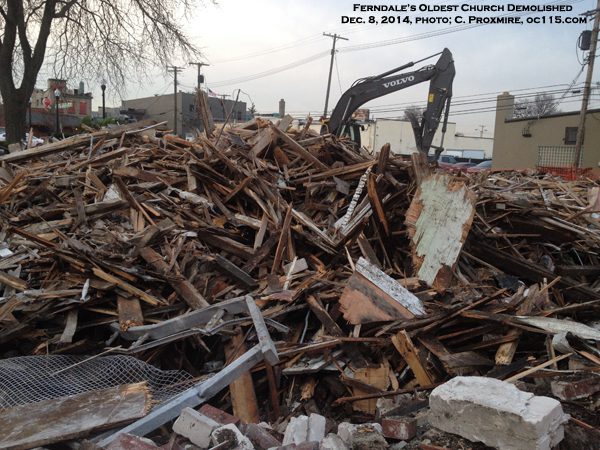