(Crystal A. Proxmire, Nov. 9, 2014)
Volunteers and technology are enabling the City of Pontiac to tackle an age-old problem in a revolutionary way. Thanks to a grant from PNC Bank and a “blexting” app designed by Detroit-based Loveland Technologies, there will soon be a record of the condition of every parcel of land in the city. Blexting is a combination of the words “blight” and “texting.” With blexting, houses, lot and commercial buildings will be photographed, categorized and put into a database that will help the city and developers know what areas need the most attention and what opportunities there may be for improvements.
“We want to eliminate

blight, and do it in a methodical, practical way,” said Mayor Deirdre Waterman as she spoke to a group of volunteers training on Saturday. “We do blight removal now. I’m signing off on demolition orders regularly. But there are lots of processes to go through – determining ownership and other legal procedures, making sure it’s not an historic property, shutting off the water – it’s such a cumbersome process.”
Waterman explained that the city responds to calls that come in about specific properties, but with a database and organized volunteers it can make the building department’s efforts more efficient. For example, instead of focusing on one home, they may be able to look at several homes in one area at the same time and get a bid to demolish them all at once which could save money and time.

Thus far demolition efforts have targeted what Mayor Waterman called “the most vulnerable” properties, those with fire damage and those that were open to trespassing. “This has reduced the number of fire runs and reduced crime in abandoned buildings,” she said.
But it’s not just about tearing down dilapidated structures. Jeff Bodel, Director of the Building Department, told the volunteers “We’re focusing a lot on demolition but we also want to focus on rehabilitation. If there is a grandma somewhere who can’t afford to get her roof fixed we may be able to put some funds in helping people rehab their homes to avoid demolition. Fixing a roof is cheaper than tearing a house down so we want to find ways to stop problems before they get to that point… Our focus going forward is fixing houses we can. It’s about preserving

our neighborhoods. With this we can analyze the area and figure out how to best rebuild our communities.”
Another benefit of blexting is that it can help the city determine what properties may have salvageable features that can be used on other buildings. “If an historic house has not been maintained and the bones of the building won’t hold it up any more, but there are some historical architectural features, we may be able to salvage some of that for historical restoration,” Bodel said.
The interactive map created by the blexting app will also be useful for developers. “If someone wants to come in and build something new, they can use the map to find an area with a group of city or county owned parcels and that can help them decide if that is an area where they may want to buy those properties,” Bodel said.

There are approximately 25,000 properties in the city with about 500 that are known to be nuisance properties. Starting in Districts 1 and 2, the SW corner of the city, volunteers have been going out in teams of two to photograph properties and make notes. They wear special badges and have been trained to be respectful of people and the law as they make their rounds. District 1 and 2 should be completed by Nov. 26, and then volunteers will be assigned to other parts of the city.
Among those hitting the sidewalk to do their part are Planning Commission members Chris Northcross and Mona Parlove. “Pontiac’s way of moving forward is people stepping up and saying I’ll be involved,” Parlove said. “We’re all working together.”
Those interested in volunteering can contact Zachary Beach at (248)758-3325 or zbeach@pontiac.mi.us.
For more info on Loveland Technologies and “blexting” go to http://makeloveland.com/. 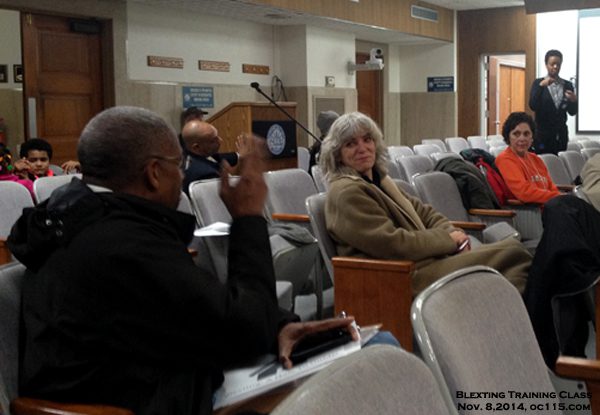 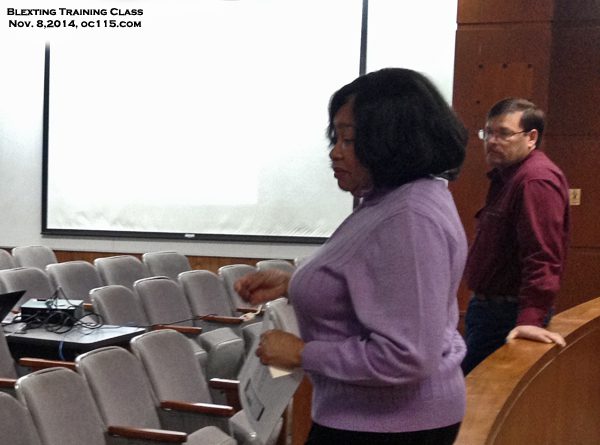