Police Searching for Woman Missing After Party in Monroe County

Police Searching for Woman Missing After Party in Monroe County

(Monroe County Sheriff’s Department Press Release, Oct. 29, 2014)
The Monroe County Sheriff’s Office is continuing to investigate the disappearance of Chelsea Ellen Bruck, a 22-year-old Maybee, Michigan resident. Ms. Bruck went missing from a party she attended on Post Road in Frenchtown Township early Sunday morning, October 26, 2014.
The Monroe County Sheriff’s Office helicopter and ground search teams using all-terrain vehicles have searched the grounds and surrounding areas where the party was held. Those efforts are continuing at the time of this media release.
As a direct result of social and mainstream media coverage of this investigation, a witness came forward with information advising he had seen Ms. Bruck at approximately 3:00 AM with an

unknown white male who was of medium build. This unknown male had medium length dark hair, a thin mustache, and facial hair. He was wearing a plain black hooded sweatshirt with no visible logo. This male was wearing black framed eyeglasses. Ms Bruck and this unknown male were seen walking in the direction where the cars were parked. It is unknown if Ms. Bruck entered a car or otherwise drove off with this unknown male.
The witness provided details of this unknown male to Detective Trooper Sarah Krebs of the Michigan State Police Forensic Art Unit, who was able to create a composite drawing as shown with this media release.
Ms. Bruck is described as a white female with blond hair, approximately 5′ 7″ tall and weighing approximately 140 pounds. Ms. Bruck was last seen wearing a “poison ivy” themed Halloween costume, which consisted of black tight fitting pants, a leaf covered top, and a dark-purple colored long hair wig. If anyone has information on the identity of the person depicted in the composite

drawing, or the whereabouts of Chelsea Bruck is asked to call the Monroe County Sheriff’s Office at 734-240-7700 or Monroe County Central Dispatch at 734-243-7070.
NOTE:  Police Reports come directly from the Police Department or agency involved and are written by the person or agency listed below the title.  We generally run these “as is” or with minimal editing for punctuation, spelling, etc. Suspects should not be presumed guilty. Those needing more information about a case are encouraged to follow up with the reporting agency or court system for the most current information.
Join in the conversation at https://www.facebook.com/oc115.
If you are a business or group that supports our work go to https://oaklandcounty115.com/sponsorshipadvertising/.
If you are a reader who wants to see the oc115 thrive, go to https://oaklandcounty115.com/reader-support/. 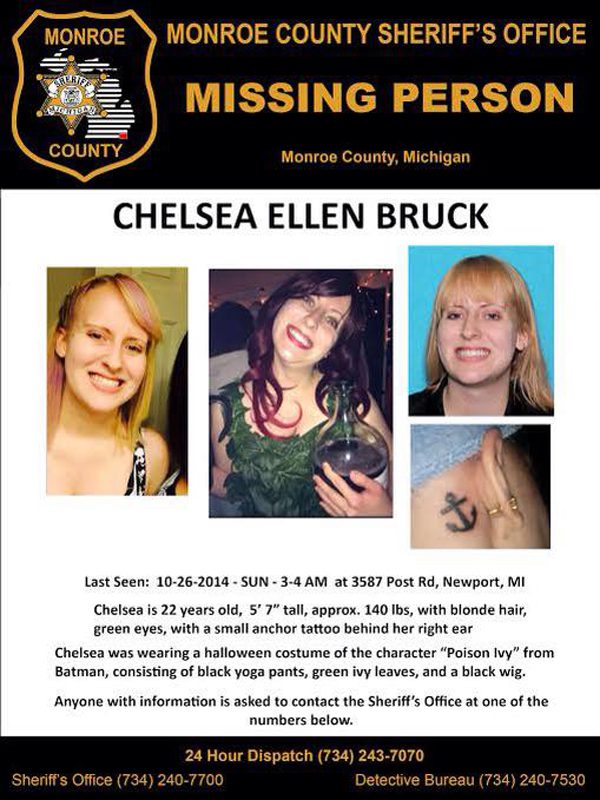