(Crystal A. Proxmire)
Michael Mirto could have been a farmer, but the universe had other plans. Instead of growing strawberries, the 37-year-old Development Director cultivates support for SE Michigan’s LGBT population through his volunteer efforts at The HOPE Fund, which is part of the Community Foundation for Southeast Michigan.
Mirto grew up in Utica, working on a strawberry farm. While studying horticulture at Michigan State, he was turned onto the environmental and health concerns with agriculture, including the harm pesticides do to the body. “I was in a residential program living with people interested in the environment, and decided to shift my focus to environmental policy,” he said.
Through these classes, Mirto met Professor John Pollard. “I will never forget him and all

he taught me. He was a grant-writing professor. Since his class I spent all the time I could writing grants for various organizations. And, as it turns out, grant-writing is actually a profession!” The realization that he could earn a living doing what he loved, and helping others, fueled his passion further.
After honing his skills with social service organizations in Northern Michigan and Chicago, Mirto found himself returning to Michigan raising funds for HAVEN, a nonprofit, in Pontiac, serving victims of domestic violence and sexual assault. That’s when he met Leslie Thompson.
Thompson was the Executive Director of Affirmations LGBT Community Center in Ferndale, and the big project on her mind was how to take the grassroots community group from a set of dingy offices in an apartment building, to a $5.3 million, fully-functional community center. She recruited Mirto to help. Along with many other volunteers, the new 17,000 square foot center opened its doors in 2007.
Through the experience with Affirmation’s, Mirto made many new connections in the LGBT community and with foundations and organizations that supported LGBT-focused work. He also felt an even

stronger calling to support the community that he was truly part of. “I’ve always enjoyed what I do, but something about this made it personal,” Mirto said. “When you’re raising money for Affirmations, you’re raising money for people that really come here and use the center and the services. You’re giving people a community and a family when they may not really have one of their own.”
From there, Mirto went to work at Wayne State University as Director of Development, a position he’s held since 2006. There his job is to travel the country talking to alumni about “how to capture their passion.” He said that “When you get to a certain point in life, you want to give back. I can help people do that.” Whether it’s a scholarship fund, a single donation, a recurring pledge, or sponsoring

the construction of a building, there are many ways that alumni come back to build the University for the generations after them.
“If you look at how the campus has grown since 2006, it’s pretty amazing. I think we are really making a difference in the University and in Detroit.”
But the 9-5 (and more) of development is not enough for Mirto, who donates his spare time to working with the CFSEM’s HOPE Fund. As one of about 20 members of The HOPE Fund Committee, Mirto helps show people and companies the value of supporting LGBT-related projects. (HOPE stands for Helping Others through Partnerships and Education.) In particular he focuses on growing endowments, which are when people give to an investment fund and the interest on that fund is there for organizations to use. “The LGBT community is under-resourced and under-funded,” Mirto said. “When times are tough, people give less. But that is when resources are needed most. Endowment funds provide stability, and they create a sense of

permanence. No matter what else happens, organizations with these funds know they will have a certain amount of money they can depend on to be there.”
The HOPE Fund is the general pool for LGBT funding, while some organizations have their own dedicated funds through CFSEM. These groups are Affirmations, AIDS Partnership Michigan, Equality Michigan, Michigan AIDS Coalition and the Ruth Ellis Center. The HOPE Fund accepts donations into their Endowment Fund or directly for grantmaking. Gifts can also be designated for the Racial Equality Initiative, an endowment aimed at supporting organizations and groups that work on the issues facing people of color in the LGBT community.
More than $1.8 million in grants have been made to 131 projects to nonprofits

serving southeast Michigan’s LGBT community. Among them are Al-Gamea – an Association of LGBT Middle Eastern Americans, Alternatives for Girls, the American Civil Liberties Union, GLSEN, Michigan Roundtable for Diversity and Inclusion, Ozone House and Transgender Michigan.
Two areas that touch Mirto’s heart are projects for older adults, and projects for the Racial Equity Initiative.
KICK – The Agency for LGBT African-Americans received $14,500 in 2010 to help them stabilize their growth, including training sessions for their board and hiring a part-time development coordinator. “KICK is a much-needed resource and being able to provide them with the funds they needed to have a strong foundation was important. Mentorship, leadership training, and having a plan for growth made a difference. It feels good seeing all the

work they are doing,” Mirto said.
Older adult issues are also incredibly important for the LGBT community. “I’m glad to see older adult projects getting funded because there are so many people who fought for equality, or who did not get to have the same freedoms that we have, who are getting older. And they need resources. Do they have safe retirement homes? Do they have competent medical care providers? Are there people to help with estates and planning? There are so many issues for older LGBT adults that our community needs to address,” he said. One project involved the creation of an LGBT Older Adult Resource Guide. Funding also helped the ACLU partner with other groups to host Older Adult Summits,

out of which grew The Older Adult Coalition.
“Another thing that’s important to know is that we don’t just work with LGBT organizations,” Mirto said. “We also provide funding to mainstream organizations to increase their capacity to serve LGBT people. The Older Adult Coalition is a good example of this. The Area Agency on Aging has been great to work with in advocating for LGBT-inclusive services.”
Allies are important, both for outreach and for fundraising. The growing exposure in the media to LGBT, and the increase of people coming out, means that there are more friends, family and loved ones who want to be part of growing support for the community.
“There are people who want to help, but may not know how. The HOPE Fund has a committee of people who review grant applications and make sure that money is invested wisely. Obviously they get more requests than they can fund, but that’s why they take the time to look at each request and make good decisions.”

Between now and the end of the year, a group of individuals have pooled together money to create a matching gift program that could bring $10,000 to the HOPE Fund. “It’s a special opportunity that we have to attract new donors. This leveraging of resources can help us fill a community need, so we’re looking to get the word out as much as possible,” Mirto said.
There are several ways people can give. Donations can be made online at https://donate.cfsem.org/#group/hope-fund. Donors can write a check to “Community Foundation for Southeast Michigan” and mail to 333 West Fort Street, Suite 2010, Detroit, MI 48226-3134. Be sure to write “HOPE Fund” on the memo line. For more complicated gifts, like legacy donations, stocks, etc. contact the CFSEM at 313.961.6675. More information can be found at https://cfsem.org/hope-fund.
When asked why he is so dedicated to raising money for social service organizations, Mirto said he was not entirely sure, just that he felt a need to give back for all the positive experiences he’s had in his life. “We all kind of have the assumption, when there is a problem, that someone else will take care of it. But if we want things to be done, we need to do it. So I think people should ask themselves, what can I do?” 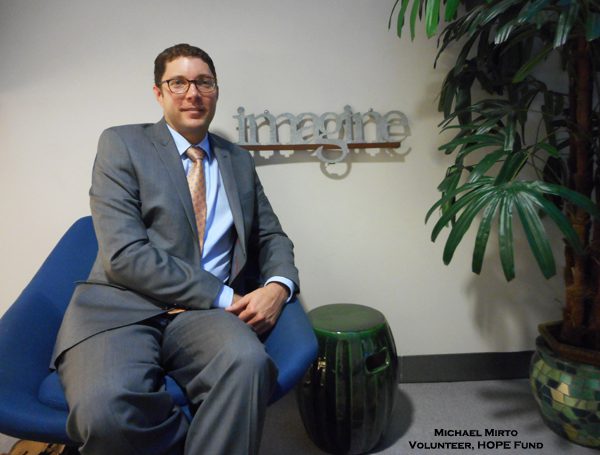