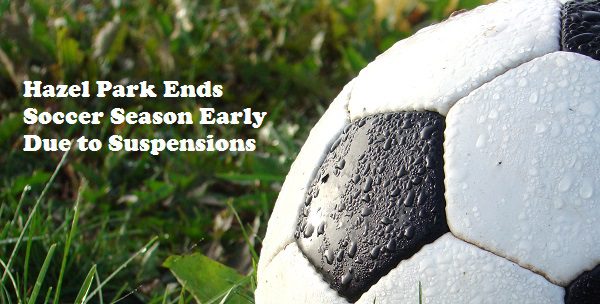 (Crystal A. Proxmire, Oct. 11, 2014)
Players and the coach of Hazel Park Varsity Soccer Team were suspended and ended the season early after “inappropriate behavior” at an Oct. 6 match against Cass Tech.
“There was poor behavior on the part of our students, our athletes, the coaches and the parents,” said Hazel Park Schools Superintendent James Meisinger. That is why he

made the decision to end the season early, issue suspensions for students, and removing the team from the district tournament.
“It was a matter of the coach, players and fans getting upset over the officiator. So the officiator, when he makes calls in a match, he has yellow cards and red cards that he holds up. The officiator started putting up cards, calling penalties, and throwing Hazel

Park people out of the game, and it escalated.”
“Staff was of the opinion that our people were at fault. I had to send a message that this is not acceptable. If you’re going to act like that, you’re not going to play. So I ended the season. I think this will stop the problem from happening in the future,” he said. Meisinger said he’s had meetings with the players, parents and coaches, making it clear to everyone that unsportsmanlike behavior will not be tolerated.
The final score of the game was 7-5, with Cass Tech winning. Administration from Cass Tech did not return request to comment.