(Beaumont Health Systems Press Release, Sept. 28, 2014)
It’s been 14 months since the horrific boating accident on Sylvan Lake. What began as a day of fun on the water for the Mansour family, ended in tragedy. One moment three siblings were tubing, then a powerboat accidentally ran over the tube and its young occupants. Of the three children, only Adriana, then 10, survived. Her older brother Alexander, 11, and younger sister Gabrielle, 6, died.
Says the children’s father, John Mansour, “We’re still grieving. It was sudden, unexpected. My wife and I were in a state of shock.”
How is Adriana doing today? One year later, doctors at Beaumont Children’s Hospital call her progress from 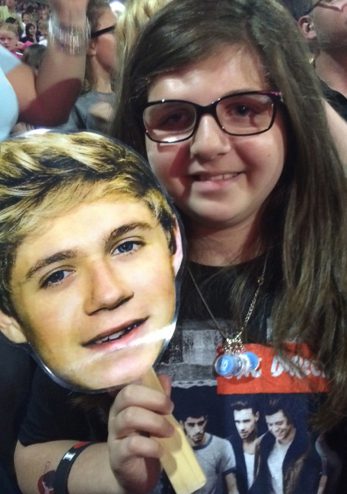 a traumatic brain injury, “nothing short of a miracle.”
Trauma Center
“I’ll never forget that Sunday,” recalls Daniel Michael, M.D., chief, Neurotrauma and Critical Care, Beaumont Hospital, Royal Oak.  “When I saw young Adriana in the Trauma Room she was clinging to life. A head CT confirmed brain injuries. She had extensive craniofacial fractures and significant damage to the right frontal lobe.”
The frontal lobe, located behind the forehead, is the region of the brain that affects personality and emotions.
The trauma team was concerned about swelling in her brain and inserted a tube in her head to monitor the

pressure.
Adds Dr. Michael, “The first 3-4 days were critical.”
Not only was there concern about pressure on the brain, the covering on her brain had been torn. In addition, her orbital bone near her eye was broken. In the next 30 days, Adriana would undergo four surgical procedures.
When her fragile condition stabilized, surgeons worked to relieve brain pressure. Adriana was then moved to the Pediatric Intensive Care Unit, or PICU. She remained there for the next month

on a ventilator, a machine that supports breathing.
More surgeries
During her second surgery, doctors repaired her head and facial fractures, and her right frontal lobe. Doctors inserted a tracheostomy, or trach and g-tube for feeding during the third procedure. The trach is a surgically made hole in the neck and windpipe that makes breathing easier. In the last surgery, a shunt was inserted in her brain. The device relieves pressure on the brain by draining excess fluid. Her condition slowly improved.
By mid-August, Adriana was moved from the PICU. She remained at Beaumont Children’s Hospital until September, when she was moved to the Neuro-Rehab unit, also at Beaumont, Royal Oak, for extensive therapy. For the next three weeks she met with speech, occupational and physical therapists for three hours per day, 5-6 days per week.
Going home
By early October, Adriana had made so much progress, she was released from the hospital to continue her recovery at home. For the next four months, she continued

her therapy at the Beaumont Health Center’s outpatient Neuro-Rehabilitation.
Says John, “From the beginning, given the severity of Adriana’s head trauma and the risk of increased brain swelling, her prognosis was uncertain. But then, she began to make progress, the results and indicators were more favorable than expected.”
In January, after the holiday break, Neal Alpiner, M.D.,  section head, Pediatric Physical Medicine and Rehabilitation with Beaumont Children’s Hospital, cleared Adriana to return to school part-time. About three weeks later, she returned to her fifth grade class full-time.
Rehab and follow-up care continue
Dr. Alpiner

developed rehab strategies for Adriana, as well as therapies and medications. This included both inpatient and outpatient therapies. While in the hospital, he got her ready for rehabilitation – all with the goal of reintegrating her into day-to-day routines. It continues as an outpatient, enhancing her social skills and preparing her for school.
“She’s done incredibly well,” says Dr. Alpiner.
Along with Adriana’s efforts, Dr. Alpiner is quick to praise her parents for their active involvement in her therapies, “Mom and dad are very involved.”
Dr. Alpiner stresses that while it has been 14 months since her injuries, she is in the early stages of recovery. “Her progress is remarkable. She returned to school earlier than anticipated and graduated from elementary school. This month, she started middle school.”
Recovering from a TBI

Elizabeth Leleszi, M.D., a pediatric neurologist, also with Beaumont Children’s Hospital, is another member of Adriana’s multidisciplinary team* of caregivers. She stressed recovering from a traumatic brain injury, or TBI, is a life-long process. One of the most common complications of TBI which she is on the lookout for are seizures.
“There are learning challenges.” But, Dr. Leleszi adds, “I think Adriana will do well. She’s a very sweet girl. And, the strength behind the Mansour family is remarkable too. They ask great questions. They’re involved and a kind family.”
Despite the significant injuries to Adriana’s frontal lobe, Dr. Leleszi points out the advantage of her youth, “Infants and children have the power to heal. Because their brains have plasticity, 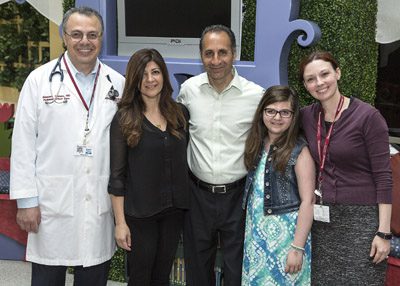 often times their prognosis is better.”
Dr. Leleszi says one of the many goals of therapy is to help Adriana’s young brain to reconnect and retrain.
Grateful family
Now 11, Adriana got to see her favorite pop group, One Direction, at Ford Field in August. She’s such a big fan, she sang one of their songs at her elementary school’s talent show. Her parents proudly shared the video clip on their smartphone during a recent reunion visit to the PICU.

“We’re so grateful to the staff at Beaumont Children’s Hospital for the wonderful care our daughter received. The large team of doctors, nurses, tech and rehab specialists, too many to list, offered compassionate, attentive, supportive care 24/7. We were most impressed with the excellent coordination of care and attention to detail,” explains John.
Adds John Mansour, “We have a deep faith. The accident touched so many in the community. If that support, love and specialized care wasn’t there, Adriana might not be here today.”
The family