Ferndale Goes All Out for Homecoming, Oct.3

Ferndale Goes All Out for Homecoming, Oct.3

“What makes homecoming special is that it’s a great opportunity for all our student and their family to take part in all the event surrounding homecoming.” That’s why Ferndale Eagles Football Coach Eric Royal and his team are looking forward to the parade and game on Oct. 3.
The Eagles will take on the Pontiac Phoenix. The game begins at 7pm at FHS, with a parade through Downtown leading up to it, starting at 5pm, kicking off at the Rust Belt at 9 Mile and Woodward and heading towards the school, up 9 Mile, then Pinecrest. The Homecoming King and Queen will be announced during half-time of the game, and the dance itself is Oct. 4.
“I won’t predict if we will win or lose,” Coach Royal said. “However I will say that our young men

have been working hard every day to improve in all areas of the game. I will never underestimate any team we play because all the teams in the OAA are good, it’s one of the top leagues in the state. However I am very confident that we have the talent and schemes to compete with Pontiac High School for our homecoming game.”
Describing the year so far, Coach Royal said “It has been a roller coaster ride so far this season. We started the season on a very high note with a big win vs. Clarenceville. However the three weeks following game one, we haven’t gotten the result we wanted. Even though we came up short in our last three games I have been very proud in our young men improvement and commitment to get better every day. We are very confident in our ability to compete in our last five

games.”
The parade and a tailgate party are new additions to this year’s fun. The parade starts on 9 Mile, just west of Woodward, and continues down Pinecrest. The Tailgate, located at Marshall and Pinecrest, will include family fun, food, and music. There will be food trucks on hand to offer a variety of tasty treats, and stadium classics are available inside from the boosters, as usual. People will start to gather around 5pm, and the parade is scheduled to kick off at 5pm.
“Homecoming is an important tradition because it a wonderful opportunity for the entire student body and the school district to showcase the

wonderful things our students are doing in the classrooms and also in the extracurricular activities. It also allows the alumni base and community member to take part in displaying school pride,” Coach Royal said.
Ronda Davis will be on the sidelines, watching her son Kobie Spencer Davis playing center on offense and working hard as a defensive end.  The 3.8 GPA-earning Sophomore is from a family full of proud Eagles.  His older sister, a former cheerleader, graduated last year.  He’s got a sister who is a freshman, a brother in middle school and a sister in Coolidge.   “It feels great seeing how the kids and the community are rallying up the spirit for the

Homecoming game this year. As a proud Ferndale HS graduate, I am happy to see the Ferndale HS community taking pride in their school and the kids. I am glad to see they are using social media and other avenues to build excitement about the Homecoming game and parade and that the parade is being publicized a lot more than it has in recent years,” Ronda said.
“The football program has been great for my son. He has become “all about Football”, to the degree that he gave up other sports such as basketball, swimming

and baseball to work on football conditioning. He still is participates in wrestling but Football is his number one. It has provided him with a lot more discipline. He went to conditioning all summer without any reminders from me – I don’t think he missed any workouts except for when we were on vacation. I think it is a great program overall.”
“The Football Boosters are a big part of making it special for the kids. They raise money for the uniforms and equipment and sponsor the team dinners and those things mean a lot to the boys and are a great organization. Since the football game is the spotlight of Homecoming before the dance I think the boys are very excited to play well and win. There will be a lot of Ferndale Alumni there and it is a big game for them. I think it brings the community together – adults and kids and it really is a great tradition that needs to be embraced.”
Learn more about Homecoming and other Ferndale Schools activities at http://www.ferndaleschools.org. 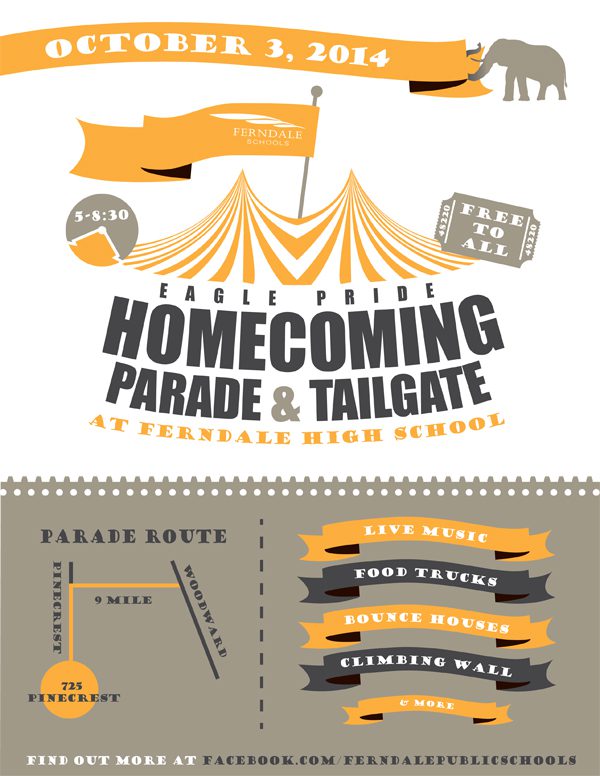