(Crystal A. Proxmire, Sept.27, 2014)
Months of planning and negotiating hang in the balance as the City of Pontiac and the Downtown Pontiac Business Association wait to see if the Pontiac Receivership Transition Advisory Board will allow them to move forward with plans for a Downtown parking program.
“We don’t want to introduce a new hardware system in the winter,” said Downtown Business Association President Glen Konopaskie at the Sept. 9 City Council meeting. “We really are trying to address the customer experience so we’re trying to push it and SP Plus is trying to move things along as quickly as possible.”
If approved, SP Plus would invest $130,000 in Downtown Pontiac to install 15 multi-space Luke II parking

meters, and 16 single-space units. SP Plus, a company that currently manages parking in Downtown Birmingham, the Detroit Renaissance Center, and Detroit Metro Airport, would manage and profit from the system, giving the DBA a payment of $2,000 a month ($24,000 per year). The DBA would then give $8,000 a year back to the City for administering the financial aspects of the program, including fine collection. The remainder of the profit would be re-invested in the DBA for the benefit of Downtown businesses.
The parking rate, set by the city, would be for $1 per hour, from 8am to 11pm, Monday through Saturday. Parking would remain free on holidays.
With the new parking program, most spots would have a 2 hour time limit. Payment would be done simply, with drivers using their license plate number instead of having to remember parking spaces.
“We’re going to be doing pay by license place, that allows you to pay at one end of Downtown and go to the

other. If you go to Lafayette Market then you go to Buckner’s Café to pick up desert, your meter money, if you use a pay station, will automatically follow your vehicle. So there’s not going to be a number system like traditional [parking programs], so that’s one of the advantages.”
The City of Pontiac authorized the DBA to work on the parking problem, and gave

them $50,000 which will be used on signage to go along with the new meters.
City Council has approved the measure, and made necessary ordinance changes. But the PRTAB declined voting on the matter at their most recent meeting, holding off until October.
The state-appointed Emergency Financial Manager Lou Schimmel ordered parking meters removed in 2011 citing operating deficits. He also disbanded the Pontiac Downtown Development Authority, and the nonprofit DBA emerged to fill the void.
The DBA says residents and employees are using the free parking, making it hard for potential customers to come in.

The parking program would only address on-street parking. If the Phoenix Center were to re-open, the City could chose to amend their contract with SP Plus or manage it separately. The future of the Phoenix Center is also up in the air pending litigation. Schimmel ordered the center torn down, but a coalition of residents and business owners want the center to stay. Ottawa Towers, who continues to use part of the Phoenix Center for parking, has sued to prevent the demolition.
A public town hall about the on-street parking will be held on Oct. 15 at 6pm at Downtown 51, located at 51 N. Saginaw Street.
More information on the parking program can be found on the DBA website at www.pontiacdba.com/#!parking/cug2.
For our story on the Phoenix Center see http://oaklandcounty115.com/2014/09/21/fate-of-the-phoenix-center-public-gets-tour-video/. 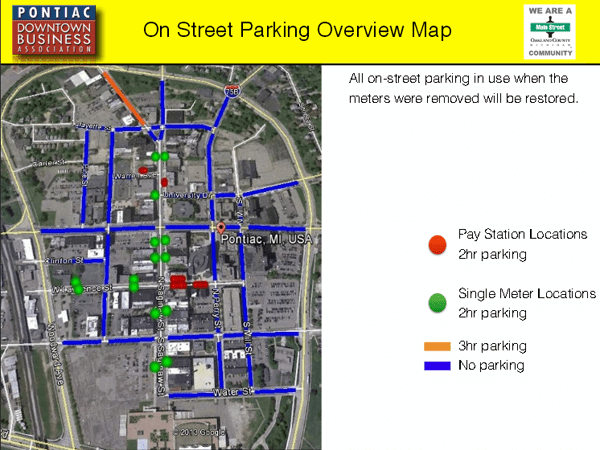